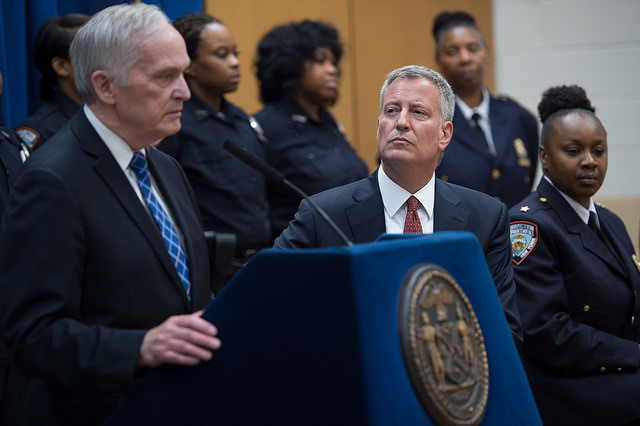 Today, the New York City Department of Correction formally ended the practice of punitive segregation for young adults ages 19 through 21 years old, resulting in the complete elimination of punitive segregation, which some call solitary confinement, for inmates ages 16 through 21 in our custody. This is an unprecedented milestone in New York State correctional history and, even more important, across the nation. To date, no other city or state has accomplished comparable punitive-segregation reforms for the 19-21 year-old age group.

As Commissioner of the NYC Department of Correction, I understand this has not been easy, and something that has required us to methodically implement, test, and refine options that ensure the safety of our staff and inmates. However, I am extremely proud of what our uniform and non-uniform staff have accomplished by reforming our punitive-segregation practices and policies.

When I became Commissioner in April 2014, there were almost 600 people in punitive segregation and a backlog of over 1,700 people. And violence in our jails was on the rise. On October 6, we had 124 inmates in all forms of punitive housing -- a reduction of nearly 80% over two years. We accomplished this by creating non-punitive, incentive-based alternatives to safely manage inmate behavior.

And we have done all this while still reducing violence in our jails.

We started our reforms even before the U.S. Attorney for the Southern District, Preet Bharara, issued a report in August 2014 that concluded that “DOC relies far too heavily on punitive segregation as a disciplinary measure” and before we negotiated the agreement in the federal lawsuit Nunez v. City of New York, which was approved by a judge in October 2015.

Through a raft of initiatives, we fundamentally transformed the use of punitive segregation for all age groups.

When we ended punitive segregation for adolescent inmates aged 16-17 in December 2014, and later, for 18-year-old inmates in June 2016, we created therapeutic alternatives to help them manage their behavior.

For the adolescents, these comprise Second Chance Housing and Transitional Restorative Units (TRU), which feature higher staffing levels – one officer to five inmates in Second Chance and one to two or even one to one in TRU. The officers in these units receive training on youth brain development, crisis prevention and management, and trauma-informed care practices for adolescents.

Inmates in these programs are afforded enhanced programming and counseling to better their life skills and job prospects and a behaviorally based incentive system enables them to earn privileges and commissary points.

For young adults aged 18-21, we have also created Second Chance and TRU units, but we have added two levels of management.

“Secure Housing” is designed to safely house young adults who are engaging in serious violence and assaultive behavior -- closely supervising them while providing individualized therapeutic programming for their behavioral needs.

For persistently violent young adult offenders, such as those who have seriously assaulted staff or stabbed or slashed other inmates, we have created special young adult units of Enhanced Supervision Housing, where inmates spend seven structured hours daily out of cell. Similar to adolescents, they are provided a behaviorally based incentive system that enables them to earn more privileges and eventually move back into the general population.

Inmates no longer serve any time that was accrued during a previous incarceration. A tiered system ensures that only serious, violent infractions earn full punitive-segregation time.
With few exceptions, we have capped the maximum sentence to 30 days and have limited the number of days one can spend in segregation to 60 days in any single six-month period.

It’s a significant accomplishment to have done this while continuing to push a downward trend in violence throughout the Department through comprehensive reform.

In the first eight months of the year, from January to August, the most serious assaults on staff have dropped 40% compared to the same period last year. Overall assaults on staff dropped 17% in that period. Even one assault on our staff is one too many, so we have a lot of work to do, but the trend is moving in the right direction.

These reforms also increase inmate safety. Uses of force by officers on inmates that result in serious injury dropped by 40% in the first eight months of the year, largely because of our de-escalation training.

The bottom line is that, contrary to the assertions of some, you don’t need overwhelming numbers of inmates in punitive segregation to make jails safer. Heavy use of segregation does not prevent violence or deter it, particularly in the younger age groups. In fact, it may make matters worse. The latest research on brain development shows that punitive segregation is inappropriate for individuals aged 21 and under.

In New York, we are proud to have made history by ending punitive segregation for our youngest offenders and curtailing its overuse for all others – all while providing safer alternatives that support both staff and inmates.