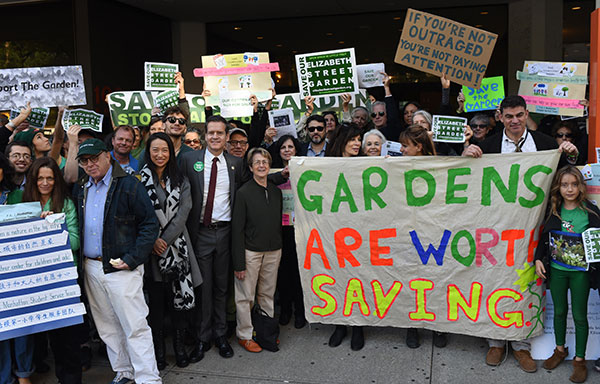 Council Member Margaret Chin is our only elected official who supports developing Elizabeth Street Garden. She seems dead set on “winning” development of the Garden at all costs, even if it means giving up the opportunity to build five times more senior affordable housing at another nearby location within our community. In her attempts to sway public opinion, Council Member Chin has repeatedly released misleading information.

Allow us to correct the record:

FACT: NOT A PUBLIC PROCESS
Chin says she is “proud of the public process” and the “substantial amount of public review.” But her decision to build on Elizabeth Street Garden was a backroom deal at City Hall, without proper public review or discussion.

FACT: COMMUNITY IGNORED, DESPITE TREMENDOUS SUPPORT
Since learning about this secret deal in 2013, Manhattan Community Board 2 has held four public hearings, and overwhelming sentiment has been for saving the Garden, including support from every local elected official other than Chin and 16 parks and community organizations.

The Garden brings joy to thousands, including many seniors who live nearby. That’s why Mayor de Blasio, the city’s housing agency (HPD), and Chin received 5,000 letters in support of the Garden — far more than the “hundreds of letters” cited by HPD — and only one in support of the housing proposal from an organization that receives thousands of dollars each year through Chin.

FACT: BETTER AFFORDABLE HOUSING ALTERNATIVES EXIST
Chin claims that “identifying sites for affordable housing...can be a monumental challenge.” CB 2 took up that challenge and identified several alternative sites, including a vacant lot on Hudson and Clarkson streets where five times more senior housing can be built. Because this site was previously committed for parkland, it will not be available if Elizabeth Street Garden is destroyed.

In addition, a proposed project at 550 Washington St., currently being rezoned, will have 476 affordable units, including 178 for seniors.

We agree with Council Member Chin and the mayor that parking lots are “ripe for affordable housing development” and, therefore, encourage consideration of the garage on 2 Howard St. located in the heart of Little Italy, but outside the height-restrictive Special Little Italy District.

FACT: CHIN’S PROMISE THAT RESIDENTS CAN “AGE IN PLACE” IS MISLEADING
All residents of CB 2 receive preference for 50 percent of any senior housing built in the district, which extends from 14th Street to Canal Street and the Hudson River to Bowery. Remaining units would be available to anyone in the five boroughs. Preference is via lottery and applies only to the first round of rentals. Therefore, if 60 units were built on the Garden, as few as 30 residents currently living in all of CB 2 would live there, and possibly none from Little Italy.

FACT: 5,000 SF OF “PUBLICLY-ACCESSIBLE OPEN SPACE” IS A RUSE
The City is asking for proposals to create “lawns, trees, walks and planting and seating areas with a variety of sun and shade conditions, and also to provide for continuation of current educational and recreational programs and events,” all in an area the size of a basketball court, surrounded by seven-story buildings. When asked about building on Elizabeth Street Garden, former Parks Commissioner Adrian Benepe said, “It’s a very small site. You’d be shortchanging either one. I think the site is barely large enough for housing. You might be able to have a little sitting area.”

Ultimately, privately-owned public spaces often end up “inaccessible or devoid” of “amenities that attract public use,” or may be converted into retail space in the future, as Chin supported on Water Street.

Mayor Bill de Blasio is right when he said “Every New Yorker deserves access to clean, safe green spaces, no matter what neighborhood they live in.” Had Chin acted upon her declaration that “Communities must be consulted about changes coming to their neighborhoods,” Elizabeth Street Garden already would be a public park.

Instead of allowing politics to determine policy, we encourage Council Member Chin and the de Blasio administration to work with CB 2 and our elected officials to build more affordable housing and to preserve the precious little public green, open space we have left, for our seniors, our children and all the residents of our community.

***
by Friends of Elizabeth Street Garden President Jeannine Kiely and D. Kristin Shea. On Twitter @elizabethstgrdn. (Both Kiely and Shea are members of Community Board 2 but are not writing on behalf of CB 2.)