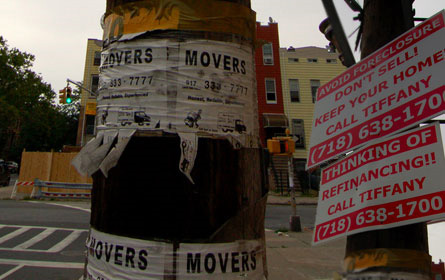 Everywhere we turn, there is evidence of how Wall Street and financial institutions have failed to step up and take responsibility for the foreclosure crisis they caused.

A few weeks ago, Charles Ferguson’s Inside Job won the Academy Award for Best Documentary Film, exposing how the explosion of predatory lending, combined with all the wrong incentives in the financial sector, stripped countless families of their life savings and cost millions of jobs around the world.

Then last week, Neil Barofsky, the federal inspector who oversaw the TARP program that bailed out the banks, resigned in protest over how much it had become a giveaway to the big banks. In explaining his decision, Barofsky writes of how banks have refused to modify mortgages or extend credit, how the home mortgage modification program has been a “colossal failure,” and how little real regulatory reform has taken place. The largest banks are actually 20% bigger than they were before the crisis, and the cost of their being “too big to fail” is now built right into the banking system.

Meanwhile, though banks can’t even find the paperwork to prove that they’ve got a right to foreclose on many mortgages, they have scoffed at the idea of reaching an agreement with the 50 states’ attorneys general to help homeowners in trouble.

Really, who could blame them? Time and again, we’ve shown that we’ll let them get away with it.

Much stronger federal and state action is needed. I remain hopeful that the Consumer Financial Protection Bureau, led by the indomitable Elizabeth Warren, will make a real difference here. And I have been encouraged by the work of new NYS Attorney General Eric Schneiderman.

But we can’t wait. We need stronger action at the local level as well. While NYC hasn’t been hit as hard as some places, communities throughout the city still have many vacant, blighted, and abandoned homes and construction projects.

In 2007, the Bloomberg Administration and the City Council helped launch the Center for New York City Neighborhoods to provide foreclosure counseling and address the crisis. Unfortunately, Mayor Bloomberg’s FY2012 preliminary budget eliminated all city funding for the Center (if only the foreclosure crisis had been eliminated).

And I am very pleased that the Housing Asset Renewal Program (HARP) created by the Administration and the Council has at last announced its first deals to convert failed development projects into housing for middle-income families.

But we haven’t seen anything from Mayor Bloomberg that holds banks responsible, or even asks them nicely. Instead, the mayor has often been Wall Street’s chief defender, traveling to Washington, speaking against additional regulation, and arguing against the renewal of New York State’s existing millionaire’s tax.

Despite these failures, the City Council is in a good position to do more.

Too often, lenders fail to take responsibility for repairs and upkeep of foreclosed or abandoned properties â€“ and the city is left on the hook to keep those properties safe. Inspired by the advocacy of New York Communities for Change, I introduced a bill (Intro 494) that would require lenders to post a bond for each property they are foreclosing on â€“ to ensure the city gets paid promptly for fees, fines, and emergency repairs during the foreclosure and post-foreclosure period. It builds on two other bills (Intro 500 and 501) sponsored by Councilmember Eric Dilan) that would require lenders to register when they bring a foreclosure proceeding and would transfer responsibility for those fines and repairs to the foreclosing bank. These bills will be heard in the Council on April 14th in the Housing & Buildings Committee.

A requirement to post a bond would force banks to step up and make sure the property they are seeking to take ownership of remains compliant with building and housing codes. This bill would apply to abandoned construction sites as well, giving us a new tool to address these blights in our neighborhoods.

And I hope we’ll go beyond holding banks responsible for individual properties. We also need them to take responsibility for meeting the credit needs of our communities. Even with the bailout money they received, and despite the fact that 2009 and 2010 were banner years, many banks are failing to lend, invest, modify mortgages, or locate branches in our communities. And yet some of these banks hold billions in government funds from the City of New York’s deposits.

The NYC Responsible Lending Act (Intro 485-2011) is sponsored by Councilmember Al Vann and was developed with the Association for Neighborhood and Housing Development and the Neighborhood Economic Development Advocacy Project (I’m pleased to be one of the four primary co-sponsors). This bill would require banks who want to make money on the business of holding the city’s cash to put forward a strategic plan for how they plan to meet community credit needs â€¦ and then provide a detailed annual report on their record of community investment and service. There would be a public hearing on their plan and track record.

Poor results would be grounds for the city to stop doing business with those banks. Philadelphia and Cleveland already have laws like this, and legislators are considering it in Los Angeles and other cities around the country.

And perhaps these steps will help promote the idea that taking responsibility is something that is expected of all of us â€¦ even financial institutions.

Brad Lander is a New York City Councilmember from Brooklyn.