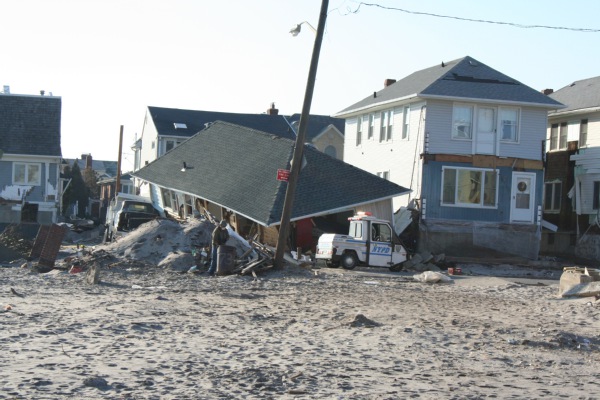 Yesterday marked the six-month anniversary of Superstorm Sandy, an unprecedented disaster that has left many New Yorkers still struggling to recover. Homeowners now face another unexpected hurdle: imminent default on mortgage payments, and with default, the possibility of foreclosure.

The origins of this pending crisis, ironically, trace back to measures mortgage servicers implemented in the immediate aftermath of the storm to alleviate the financial strain of repairing storm-ravaged homes. Mortgage forbearances, which allowed homeowners to defer mortgage payments for three to six months, provided some borrowers with breathing room to start rebuilding.

But as those deferred payments now come due in one lump sum, many borrowers find themselves once again at the precipice of financial insolvency.

In the days following Superstorm Sandy, a natural disaster quickly turned into a financial one.

For some homeowners, this damage was catastrophic: nearly 10,000 homeowners suffered damage in excess of half the value of their property.

And though homeowners could turn to insurance and FEMA for assistance, securing these funds has too often entailed a protracted struggle against unresponsive agencies. Insurance adjusters and FEMA inspectors persistently undervalued damage and often denied payments, while what funds were forthcoming trickled in.

Shortly after the storm, mortgage servicers set in motion a series of policies that now imperil homeowners struggling to rebuild. At Gov. Andrew Cuomo’s prodding, state chartered banks and state registered mortgage servicers agreed on November 7 to offer forbearances of 90 days or more to these cash-strapped homeowners.

As the Superintendent of the Department of Financial Services, Benjamin Lawsky, noted at the time: “Too many people have already lost their homes or are facing difficult repairs … [w]e don’t want to add to the problem by having people lose their homes or develop financial problems because they can’t make timely mortgage payments due to the storm.”

The financial reckoning that Cuomo and Lawsky sought to stave off came anyway, though delayed.

This month many homeowners are receiving notice that their forbearances are coming to an end. And with the end of the forbearance comes a bill for up to six months worth of delayed mortgage payments.

Recognizing this impending crisis, Cuomo fired back in early March, announcing a review of mortgage servicer practices and issuing a harsh rebuke: “It would be illogical to offer that relief and now expect lump sum payments from financially-strapped homeowners … [a] homeowner who could come up with three months in mortgage payments all at once probably didn't need forbearance in the first place … [e]veryone else needs more time to repay.”

But as the deadline for repayment fast approaches, the servicers’ message to homeowners has become clear: default.

Wells Fargo, for example, requires nearly all homeowners whose forbearances are coming to an end, and who cannot afford the lump sum payment, to submit a mortgage modification application. As part of this application package, homeowners must cobble together a dizzying array of documents: signed tax returns from the past two years; proof of one month’s income; two months of bank statements; and a host of other papers, forms and certifications.

Homeowners who lost everything in the storm are scrambling to piece together an application that would be cumbersome under normal circumstances. And given what we know about delays in the servicers’ application review process, even if homeowners submit applications before their forbearances end, default still remains all but unavoidable.

Servicers like Wells Fargo, who simply recycled their regular mortgage modification procedures for Sandy-affected homeowners, have an abysmal track record in reviewing these applications, with response times usually measured in months, not weeks. Sandy-impacted homeowners can reasonably expect even greater delays.

As Cuomo said, homeowners who can afford to pay three to six months’ worth of mortgage payments did not need the forbearance in the first place. For those who did, mortgage servicers’ policies have been less than helpful. Mass default, however, can be avoided.

The Department of Housing and Urban Development recently announced extended forbearances and streamlined modifications for some homeowners. And Governor Cuomo has called on Fannie Mae and Freddie Mac to ease restrictive guidelines and permit banks and mortgage servicers to extend forbearances or offer non-interest bearing payments due at the end of the loan.

This latter policy in particular would provide genuine financial relief for homeowners. But with crushing payments looming, the time to act is now.

Christopher Fasano is an attorney in the New York Legal Assistance Group's Storm Response Unit. Image of homes in the Rockaways destroyed and damaged by the hurricane. Photo: Cristian Salazar.