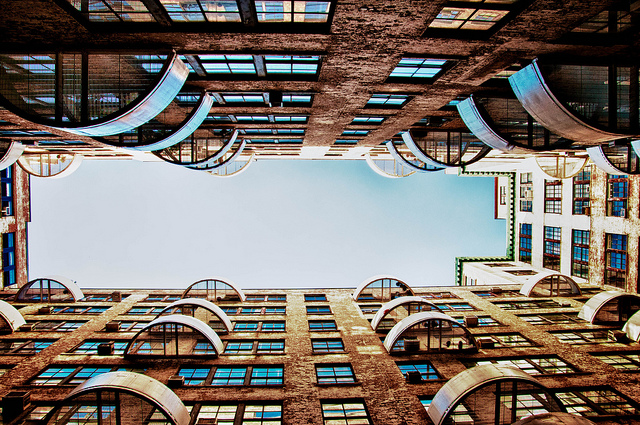 In July, the Real Estate Board of New York went on a media blitz, touting their latest report blasting landmark preservation in New York City. This is part of REBNY’s ongoing campaign to paint our landmark preservation system, which covers a little over 3 percent of our city’s building stock, as “out of control” and “broken.”

In this latest attack, using Greenwich Village as an example, REBNY claims that landmarking makes New York unaffordable, and pushes the working and middle class out of our neighborhoods.

REBNY should tell that to the residents of Westbeth and 505 LaGuardia Place, Greenwich Village’s two largest affordable housing complexes.

Westbeth is the former Bell Telephone Laboratories, converted to subsidized housing for artists by Richard Meier in 1970. 505 LaGuardia Place, an affordable co-op designed by I.M. Pei in 1964, is part of a pinwheel-shaped trio of towers surrounding a giant Picasso sculpture.

Residents of both complexes are very committed to preserving the affordability of their homes, and both fought long and hard alongside the Greenwich Village Society for Historic Preservation to secure landmark status for them.

In both cases, residents felt landmarking would protect the character of their surroundings and provide a bulwark against schemes to demolish their homes and replace them with something less affordable.

But GVSHP worked with the tenants association to use the complex’s landmark designation to apply additional pressure for long-overdue repairs.

If REBNY was truly interested in examining Greenwich Village’s struggle with affordability, they would have also talked to residents of the far western part of our neighborhood. That part of our neighborhood, which until relatively recently mostly lacked landmark protections, also saw the swiftest rise in housing prices over the last two decades, and the most dramatic transformation from a mixed-use, mixed income community to home of the super-rich.

Quite contrary to REBNY’s assertions that landmark designation undercuts the affordability of our neighborhoods and stifles economic development, that un-landmarked area saw working factories and warehouses employing scores of people torn down and replaced by luxury high-rises that now largely serve as trophy homes for jet-setters who spend little time in New York.

Rather than increasing affordability, as REBNY would have you believe, the lack of landmark protections in this part of our neighborhood helped lead to a wave of ultra-high-end development the likes of which few parts of New York have ever seen.

Of course it might be easy to dismiss any claim by REBNY to champion the cause of affordable housing, since, in addition to dismantling landmark protections, the group has also sought to undermine the rent regulations that guarantee affordable housing for millions of New Yorkers.

And I have to admit, I take some personal umbrage with REBNY’s claim. In addition to serving as executive director of the Greenwich Village Society for Historic Preservation, I am also an affordable housing advocate, having sat on the board of several of our city and state’s largest affordable housing groups. I grew up in an affordable housing development in the Bronx, and spent most of my adult life in exactly the kind of affordable, rent-regulated housing as well.

In spite of this, I am glad that REBNY is shining a light on the relationship between landmarking and affordability, especially in an election year. I believe that a true examination of this relationship actually shows that landmark designation tends to help, not hinder, the cause of keeping our neighborhoods affordable.

But a true examination does not seem to be REBNY’s goal. In addition to alleging that landmarking causes unaffordability simply because neighborhoods like Greenwich Village are now both landmarked and expensive, REBNY also seeks to play upon the fear that landmarking adds prohibitive expenses to basic property maintenance.

While undoubtedly the extra layer of bureaucracy involved in landmarks regulation can add time and expense, REBNY’s approach is to throw the baby out with the bathwater. Rather than joining landmarks advocates in calling for increased funding for the Landmarks Preservation Commission (the smallest of all New York City’s public agencies) to streamline this regulatory process, REBNY has instead sought to create a climate that would starve the agency and dismantle its portfolio.

In spite of this fear-mongering, the reality is that almost all repair and restoration work to landmarked properties merely requires a staff-level approval from the Commission, which can typically be secured in less than 30 days. And while there are cases where the Commission may require slightly more expensive materials for renovation work, these are often investments which pay off in the long term, with more durability that helps protect buildings from deterioration.

For example, the East Village has seen a spate of “rooftop additions” where new owners seek to build additional floors on top of buildings while residents are still living there. Tenants frequently claim that the construction is aimed at making life intolerable and forcing them out, and it often succeeds in doing just that. But in landmarked districts, such additions are harder to build, and much less likely to be approved.

Similarly, developers sometimes use the “demolition clause” to get around the rent regulations that allow long-term residents to stay in their homes at relatively affordable rents. One of the few ways in which a developer can remove a rent-regulated tenant from their home is to demolish the entire building. But in landmark districts, such demolitions are rarely allowed.

Listening to REBNY, you would think that developers are regularly thwarted from constructing new affordable housing in places like the Village due to landmark regulations. In fact, quite the opposite is true.

An enormous percentage of our neighborhood’s remaining affordable housing stock is located within its landmark districts, which helps protect it from some of these more unscrupulous practices. And, in my 20 years of working on both landmark and affordable housing issues, I have yet to encounter a single example of an affordable housing development that could not be built due to landmark regulations.

By contrast, I know of many cases of affordable housing conserved or developed within preserved buildings, often using tax breaks and financial assistance available specifically for the re-use of historic buildings. Even without these incentives, re-use of existing buildings is often cheaper and more efficient than new construction, to say nothing of more environmentally responsible.

So while landmark designation may not be the answer to our city’s affordability crisis, it is certainly not the cause of it, as REBNY would have you believe.

Because it’s not just in the Village that landmarked buildings shelter a diverse range of people and businesses, including long-term residents who have put down roots and aspire to stay permanently in their communities. Landmark designation, in helping to preserve the buildings these residents and businesses call home, give them a fighting chance to stay as well, and can help ward off some of the more pernicious means by which they can be forced out.

Without landmark protections, these buildings are rarely if ever demolished to make way for more affordable housing or cheaper retail space. Instead, they are almost always lost to new luxury housing, usually with retail space for chain or big box stores, not small mom-and-pops.

This is one of the reasons we are seeing neighborhoods clamor for landmark protections throughout the city, from Bedford-Stuyvesant to Bay Ridge, Ridgewood to Richmond Hill, the South Bronx to Staten Island.

Figuring out how to maintain the affordability and protect the character of our neighborhoods is among the most pressing issues facing our city this election year. Scare tactics and false equivalencies but forward by REBNY that mask hidden agendas are not the way to find solutions to these serious challenges.

A thoughtful examination of the facts is. And I believe the facts show landmarking and affordability are not only compatible, but more often than not, go hand in hand.

Andrew Berman is executive Director of the Greenwich Village Society for Historic Preservation.