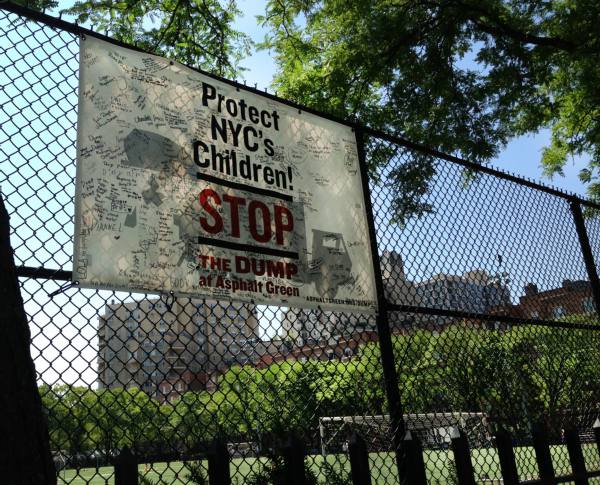 Each year, New York City produces approximately 14 million tons of waste, almost all of which ends up in out-of-state landfills. Before the waste can be exported, however, it has to be collected at one of 58 transfer station around the city. More than two-thirds of that waste is transported by truck to transfer stations in the south Bronx, northern Brooklyn and Jamaica, Queens.

In 2006, City Hall unveiled a 20-year plan to change how the city handles its waste management, and proposed building a marine waste transfer station on the Upper East Side.

The plan for the station at 91st street has not only become a heated political issue in the mayoral race, but also in the 5th City Council District race. District 5 candidates Ben Kallos, a Democrat, and Doug Garland, a Republican, have pledged their opposition to the plan. — Editors.

The construction of the 91st St. Marine Transfer Station would not constitute, as proponents suggest, “environmental justice” or Manhattan doing its “fair share,” and this isn’t just an issue about our backyards. No residential neighborhood – not mixed-income Yorkville, or any other part of the city – should be the site of a trash facility like this one.

Our citywide trash plan was obsolete the day it was passed in 2006 because it causes child asthma, smog in our streets and waterways, and overflowing landfills. To be an environmental leader, we need to re-imagine how we handle our city’s trash. The debate should not be over which community has to shoulder a miserable load, but how we can improve our systems to avoid misery.

Garbage dumps don’t belong in the heart of bustling, vibrant neighborhoods. On 91st St., the proposed waste-to-landfill station bisects a park where kids play sports and Olympians such as Medalist Lia Neal train at the swimming pool. People are often surprised to hear that the Upper East Side has one of the lowest amounts of open space anywhere in New York City, an urgent health concern in a crowded city like ours, and we can’t afford to allow trucks packed with garbage to idle where runners jog and families enjoy the outdoors.

Every neighborhood has its own treasures, and no borough should bear the burden of a bad plan. New York City, a leader in so many spheres, can’t continue to lag far behind when it comes to trash. We must initiate programs to dramatically reduce waste, support Mayor Bloomberg’s intelligent composting plan, and transition from 15% to 75% recycling to match other major cities like San Francisco – taking advantage of recycling plants that already exist.

Instead of distorting admirable principles to justify bad policy, the city must apply our considerable organizing power and ingenuity to work together to build a greener, smarter city.

The proposed waste transfer station is the most urgent issue facing the northern portion of the 5th District, but it will also profoundly affect the entire East Side of Manhattan. For this reason, I established the “Dump the Dump” party. I am more than just opposed to placing the dump in District 5.

If elected, I will propose legislation banning dumps from all residential communities throughout New York City. I signed the Candidate Pledge 2 Protect and I also signed the Resident pledge, vowing to support only anti-Dump politicians such as Joe Lhota, and to oppose pro-dump candidates like Bill de Blasio.

The argument made for locating the dump in the Upper East Side for reasons of “environmental equity” is based upon false assumptions. The proposed location near the Stanley Isaacs housing project disproportionately affects the very constituents left unprotected from Transfer Stations in other sections of the city.

The Upper East Side, particularly District 5, is comprised of a wide range of economic groups, ethnicities and other demographics. And the effort to build a Dump in the densest residential area of the United States, when other Transfer Stations are located in commercial zones, makes a mockery of the concept of borough equity.

I founded the “Dump the Dump” Party to advocate for the rights of all New York City residents to neighborhoods that are free of environmental hazards.