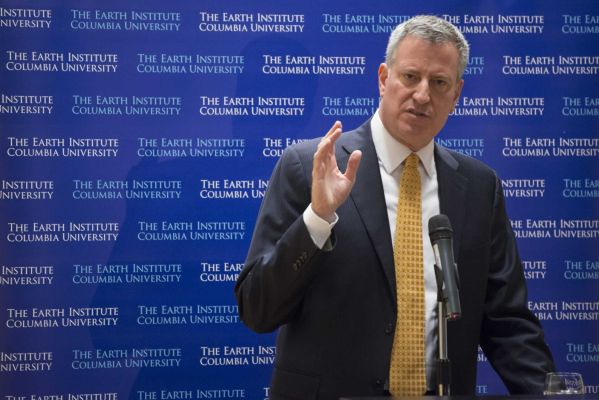 We are writing to you as graduate students at Columbia University’s School of International and Public Affairs, to put forth a series of policy recommendations. The priorities in this letter are based on the results of a survey of SIPA’s student body. As SIPA is your alma mater, you know that we represent a diverse community with a strong commitment to public service. After reviewing the survey results, we offer the following strategies to help you and your administration address New York City’s most pressing problems.

Affordable housing in New York is at risk due to a highly speculative market, scarce housing supply, and an imperfect set of code enforcement mechanisms. To mitigate these problems we recommend:

Creation of a landlord rating system and increased sanctions against failing landlords. The Department of Housing Preservation and Development currently tracks building violations, ownership, purchase price, property debt, and outstanding taxes and liens. While a landlord may face fines or liens for transgressions there is currently no mechanism to control for overleveraging of affordable rental units, and many fines and liens are never collected because the cost to collect exceeds the amount of the penalty. Using the available information, HPD should create an index that holistically assesses the quality of New York City landlords, resulting in publicly available grading system. Landlords with poor grades should receive heavy financial penalties, and/or be barred from purchasing additional property in the City. Landlord ratings are likely to be well received by New Yorkers, who have become accustomed to grading criteria in other areas such as restaurants and food trucks.

Create a survey of vacant properties, and use these lots to support the New York City Community Land Initiative. NYCCLI represents a coalition of community groups seeking to reduce market speculation through the implementation of Land Trusts, a non-profit vehicle that preserves affordable housing in perpetuity through land use restrictions and the development of housing units. Successful models exist in San Francisco, Burlington, and Berkeley. By conducting the survey and unlocking vacant lots, the City can minimize the impact of market forces on affordable housing in vulnerable neighborhoods.

Use mayoral discretionary power to dedicate an additional 1 percent of the Department of Homeless Services Budget for programs that serve long-term housing needs for the homeless. In particular, these additional funds should be used to purchase land for the New York City Community Land Initiative and to develop low-income affordable cooperatives in NYC, both mechanisms for building asset wealth in traditionally marginalized communities.

New York City Transit is underperforming and cannot efficiently move its current ridership. Congestion is a daily challenge and accessibility continues to marginalize outer-borough communities. Priorities for this administration should be:

Establish “congestion” or “fair” pricing to alleviate gridlock. Former transportation commissioner Sam Schwartz and MoveNY have outlined a “fair” pricing plan that shares the tolling burden among residents of all the boroughs. This plan institutes moderate tolls on the East River bridges, while decreasing the tolls on the Verrazano-Narrows, Whitestone, RFK, and Throgs Neck. This toll system should be implemented and the funds must be directed to strengthen public transportation infrastructure against the effects of climate change and to expand outer borough select bus service routes.

Institute a commuter tax. Suburban residents who work in the five boroughs utilize city services, though the cost of paying for these services falls on city residents. A modest commuter tax of 0.005 percent of income—costing $250 per year for a commuter with an annual salary of $50,000—could generate millions in annual revenue for the city. The funds from a commuter tax should help improve NYCT and finance its capital projects.

Workers employed in science, technology, engineering, or math fields earn 12-60 percent more than similar workers in other fields, with the greatest advantage going to those with a high-school degree or less. Despite the projected creation of 29,000 tech-sector jobs by 2020, graduates of local colleges and universities are twice as likely to major in humanities than STEM fields.  In addition to expanding universal Pre-K and reaching a contract with the city’s teachers, the mayor must capitalize on the growth of math-dependent sectors by taking the following steps:

Promote education in STEM subjects, particularly among girls, minorities, and other traditionally underrepresented groups. The city should expand the number of teachers receiving training in these subjects, provide dedicated time for professional development to encourage student achievement, and produce an annual analysis of the progress that individual schools make in increasing student participation in advanced math and science courses.

Prepare students for immediate post-graduate employment by providing hands-on experiential learning and alternative pathways to certification, additional degrees, or advanced standing, as has been done at P-Tech in Brooklyn. This mayoral administration should make the successful components of P-Tech a standard for future high-school redesign activities, and pilot transferrable course modules in other city schools in the next academic year.

Provide additional in-service learning opportunities — like app development for community use — and exposure to potential employers through out-of-school-time programs like Girls Who Code.

The number of people living in New York City is expected to reach 9 million by 2030. To ensure that all residents have access to the economic opportunities, clean atmosphere, and safe and secure living conditions that they deserve, we recommend that the following action be taken to facilitate robust yet sustainable economic growth:

Lobby the City Council to pass a 10 cent tax on paper and plastic bags. Cities and states across the country are adopting a bag tax to reduce waste and generate revenue. Implemented at the point of sale, 5 cents would go to each the retailer and the City. This tax would promote behavioral change for consumers and generate revenue that can be used for sustainability efforts elsewhere. From the estimated 5.2 billion bags used by New Yorkers each year, the tax could generate $520 million.

Incorporate vocational training into the services offered by the Mayor’s Office of Immigrant Affairs. Nearly half of the labor force in New York City is comprised of recent immigrants. Recognize the vital contributions of these communities to the city’s economy and improve access and availability to programs dedicated to workforce development. Although the Immigrant Entrepreneur Initiatives and Immigrant Bridge programs furthered the employment gains of immigrants with high levels of education and experience, capacity must be expanded to include low-skilled individuals in order to ensure mutually beneficial participation in the modern economy.

Expand the existing NYC Business Link program, which provides wage subsidies to employers who hire public assistance recipients, to include low- and middle-income applicants who do not receive assistance.

Implement pilot microgrid programs to serve Coney Island Hospital and NYCHA facilities in the Rockaways. Sandy recovery is estimated at $19 billion, and as a region, New York lost $50-60 billion in economic activity. These numbers are expected to increase by 2050. Microgrids decentralize the electrical grid and contain the impact of damage and power loss. They incorporate multiple types of electrical generation, from gas to solar, and allow communities to sell excess generation back into the grid. $294 million of the federal recovery funds from Sandy are earmarked for resiliency programs and could be used for this initiative. Implementing microgrids in these locations would both protect these at-risk populations, many of whom were evacuated during the storm and went weeks without electricity, and inspire other communities to adopt them for themselves.

As your administration tackles these challenges, it will be important to adopt a comprehensive strategy and to include a diverse set of partners: political insiders and newcomers; wealthy, middle class, and poor residents; academics and practitioners; and seasoned public servants, as well as the next generation of policy advisers. In reconciling New York's "two cities," we urge you not to neglect one in favor of the other, but to foster interdependence and shared interests between the two.

This is a special time for New York City. At SIPA we are here to help and to serve, and hope that we can contribute to your administration as it addresses the issues outlined above.

We wish you the best of luck.