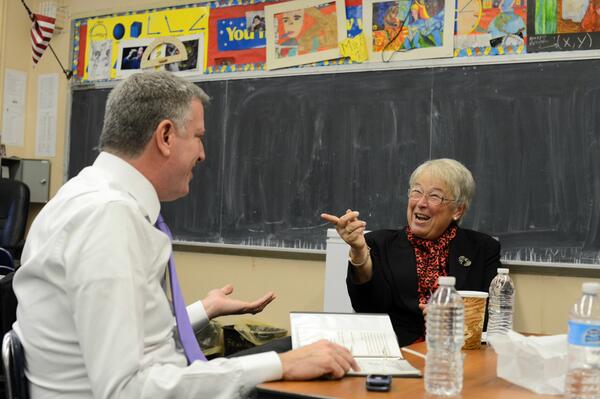 Two weeks ago, Chancellor Fariña introduced a major education policy change. Students in grades 3-8 will be assessed for promotion by "the integrated use of multiple criteria" equivalent to an achievement portfolio, and "State test scores may not be the primary or major factor in promotion decisions." This policy replaces the Bloomberg fantasy that holding students back is a useful solution to our systemic education problems.

Ten years ago Mayor Michael Bloomberg and Schools Chancellor Joel Klein announced a new student promotion policy based on retention – holding students back in the 3rd grade based on their New York State test results. The mayor and chancellor trumpeted this tough love approach as a system to improve students' outcomes and strengthen academic standards across the city's schools.

This new retention policy generated a maelstrom of protest. Opponents cited decades of research demonstrating that holding students back encourages academic failure and dropping out, and argued that standardized tests were not designed to assess individual students' readiness for promotion. But the mayor and the chancellor were undeterred. They submitted their end-social-promotion policy to the Panel for Educational Policy, and when three panel members declared they would vote against it, the mayor engineered their removal before the vote.

Eight years later, in June, 2012, the Bloomberg administration quietly decided roll back it's approach. The administration's 2012 revision of its retention policy gave principals discretion to promote 3rd through 7th-graders who'd been held back multiple times or were significantly over-age for their grade – a covert admission that the get-tough policy wasn't working.

Some of this huge decrease was due to a rise in test scores, however ultimately spurious they were, and a corresponding drop in the numbers of students targeted for retention. But most of the decrease was due to the decisions of frontline educators who stretched the limited discretion written into the end-social-promotion policy on behalf of 3rd graders who, in their professional view, should not be held back.

Chancellor Fariña's new promotion standards justifies, and retrospectively honors, all those teachers and principals who used the loopholes in Bloomberg's get-tough policy to demonstrate that student achievement and capacity cannot be usefully assessed by standardized tests, and that holding students back cannot contribute to their educational growth. The new policy mandates the use of a range of assessment measures that respond to the diversity of students' learning capacities, such as a student's body of work over the span of an entire year.

Thanks to this advance, the New York City school system now has the opportunity not only to restore sanity to promotion/retention decisions, but to tackle the core questions of how best to assess our students' academic achievement and, most important, how to improve their outcomes.

***
by Norm Fruchter, senior scholar at the Annenberg Institute for School Reform and a mayoral appointee to the NYC Board of Education, colloquially known as the Panel for Educational Policy (PEP)