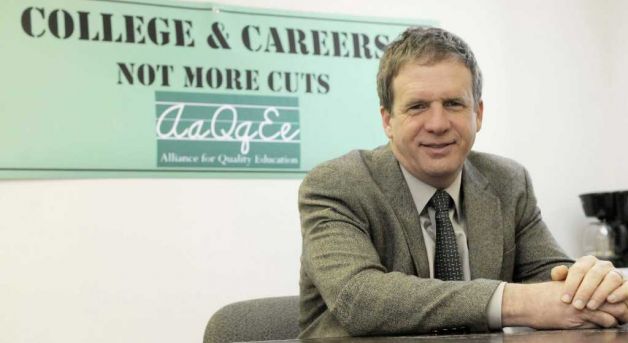 The future of public education looks frightening under Governor Cuomo.

The Governor has completely abandoned his obligation to adequately fund public schools—and this weekend, he will travel up to Lake Placid to "reform, relax, and retreat" at Camp Philos, a "philosopher's camp" on education.

Real philosophers, like Ralph Waldo Emerson, who retreated into those same woods 150 years ago, believed in a well-rounded education system that would be fully funded by the state.

But in our modern day, when it comes to public schools, retreating and relaxing is a privilege that parents, students and teachers in severely underfunded public schools across the state just don't have.

So what is this all really about?

Camp Philos is really more of a private resort for the wealthy and powerful corporate education reformers—tickets cost a whopping $1,000 each (for VIPs $2,500). It's a chance to plot and scheme about how to control the direction of education in New York State and the nation; and they just may have the money to do it.

Governor Cuomo will be the honorary chairman of Camp Philos, and next month he will be honored by a charter advocacy group in D.C. as the national "Charter Champion." These "honors" are well deserved, in the Orwellian sense, following a state budget session where Cuomo proposed to underfund traditional public schools that serve 97% of students. At the same time, he aggressively drove more resources and special privileges to charter schools that serve a mere 3% of students across the state.

This honor allows Cuomo to cash-in on the lucrative campaign donations of ideologically-motivated bankrollers of the corporate education reform agenda; people like Ken Langone, chairman of Republicans for Cuomo, who gave the Governor $50,000 and has raised much more. This is the same crowd that just spent more than $5 million on TV advertising and lobbyists to bully the legislature into submission as Governor Cuomo carried their water on education.

While backers of the corporate school agenda are proclaiming Cuomo as a conquering hero, public school parents around the state are protesting against him. His policies have systematically forced classroom cuts every year he has been in office and have promoted a damaging culture of teaching to the test. Under his watch New York State schools have dropped from 8th to 20th in K-12 Achievement, according to Education Week, the nation's leading education periodical.

The organizers of Camp Philos are literally bathing in money from hedge fund managers and other super-wealthy donors that are ready to continue arming the Governor in his effort to push forward more corporate-style reforms for our schools. These reforms do absolutely nothing to improve teaching and learning at the majority of public schools across the state. Instead, they aim to increase testing, expand privately-run charter schools, punish schools instead of improving them, and take parents out the equation of improving schools.

This corporate reform agenda is based on competition and bottom-lining schools, students and teachers the way you would a balance sheet. It is the completely wrong direction for education in our state, but the Governor insists on getting our children lost deeper in the woods.

Meanwhile, our public schools are barely scraping by. Year after year, school districts across the state have been put through an endless cycle of classroom cuts that have resulted in shrinking opportunities for students. The result is less art, music, gym, afterschool programs, and Advanced Placement courses for students—all while increasing the amount of test-prep and testing.

Basically, while becoming Chief Philosopher of Camp Philos, Governor Cuomo has kicked the Campaign for Fiscal Equity to the curb, even though the state's highest court established that billions of classroom dollars were needed for students, especially those with the highest need.

This out-of-touch attitude for public education is no surprise, considering he has not toured a single public school since taking office.

Here's a solution: instead of hanging out with the corporate reform crowd collecting campaign cash, Governor Cuomo should visit a neglected and underfunded rural school, or an overcrowded urban school and ask students to grade his education policies.

***
by Billy Easton, Executive Director of the Alliance for Quality Education