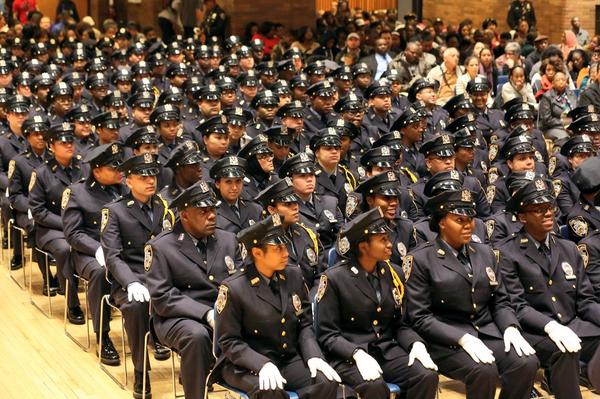 In the last week the de Blasio administration has announced three new initiatives designed to reduce some of the negative consequences of over-relying on criminal justice solutions to solve community problems. If his administration is serious about moving in this new direction, they need to come out against hiring additional police in next year's budget.

Last week it was announced that New York was planning to adopt aspects of Seattle's Law Enforcement Assisted Diversion (LEAD) program, designed to divert low level offenders from the criminal justice system and into treatment and training programs. Seattle's program relies on officers to refer those they come into frequent contact with in relationship to drugs and prostitution. These are typically repeat offenders who regularly cycle in and out of jails, emergency rooms, and courts at great expense to the city and with only limited and temporary public benefit. Unfortunately, the new plan as conceptualized here is limited to non-arrestable violation offenses, undermining a key source of savings and possibly subjecting people to additional criminal justice involvement over minor offenses.

Hopefully this is just the warm up to a more comprehensive effort to deal directly with the myriad of social problems facing this difficult population.

Next, the mayor announced that he was ordering a major overhaul of school disciplinary procedures. This is great news for anyone who has been following the failed national trend of criminalizing young people through a growing number of zero tolerance policies. Since the NYPD took over school security, the number of young people arrested, cited, and suspended has increased dramatically. While this policy change does not directly affect NYPD school safety officers, it sends a message to school officials that they need to take greater responsibility for managing school safety without relying on ever more punitive measures. A recent report by a task force put together by former New York State top Judge, Judith Kaye, showed that well-trained principals in even the most difficult to manage schools have been able to dramatically reduce suspensions and arrests without undermining student safety.

Finally, the Department of Corrections announced a new policy this week that would end the use of solitary confinement for juveniles on Rikers Island. During a recent visit I made to Rikers I saw that almost 20% of juveniles were held in solitary conditions and in the process denied access to educational programs. A growing body of research has shown that solitary conditions are especially traumatic for juveniles and may serve to make them more violent and socially withdrawn upon release. This is a major positive development, leading some, like Council Member Elizabeth Crowley, to call for removing juveniles from Rikers altogether given its entrenched culture of violence.

All of this stands in stark contrast to last month's announcement by Police Commissioner Bill Bratton that in next year's budget cycle he intends to ask for at least 1,000 additional police officers. This would be a major step in the wrong direction and if included in the mayor's budget, would substantially undermine his claims of progressive criminal justice reform.

While the NYPD has an important part to play in creating social stability, its role has been dramatically over-extended in the last two decades. With the expansion of the War on Drugs and the adoption of Broken Windows-based policing, the NYPD has taken on a wide variety of tasks that it is not particularly well-suited for.

Despite decades of intensive anti-drug policing, which has given hundreds of thousands of mostly brown and black people criminal records, the NYPD has few victories to point to. While it's true that open air drug markets have been reduced through intensive criminalization, drugs are just as easily obtained as ever. Any high school student in New York can easily obtain any drug they choose. Overdose rates and other health problems associated with drug use have shown no signs of improvement either. It's time to take police out of the drug business and turn it over to public health officials. Decriminalization of drugs in parts of Europe has been a huge success leading to lower crime and better health outcomes. The full legalization of marijuana as in Colorado and Washington would be a start.

Despite the claims of its supporters, there is little to no academic evidence that Broken Windows policing has made us safer or is worth the high cost of criminalizing hundreds of thousands of mostly non-white New Yorkers every year. Yes, it can be used to drive out a homeless encampment or get rid of squeegee men, but it is not the reason for a multi-decade international crime drop that has occurred in hundreds of cities that never practiced it. It's time that we stopped criminalizing poverty and disorder and found more effective and less costly ways of improving the quality of life of all New Yorkers. Major investments in affordable housing, adequate mental health services, and meaningful employment opportunities are the humane, just, and cost effective ways of moving forward.

Some will dismiss this advice as a soft-hearted liberal appeal for more social spending. The evidence, however, is clear that we cannot police or incarcerate our way out of the social problems facing the city. And, even if we could, we can no longer afford the implications for racial and economic inequality that undergird such an approach. This administration understands this reality and needs to quit trying to have it both ways. It's time to double down on alternatives to criminalization.

***
Alex S. Vitale is associate professor of sociology at Brooklyn College and author of City of Disorder: How the Quality of Life Campaign Transformed New York Politics. He is senior policy adviser to the Police Reform Organizing Project and serves on the New York State Advisory Committee to the US Civil Rights Commission. You can follow him on Twitter at @avitale.