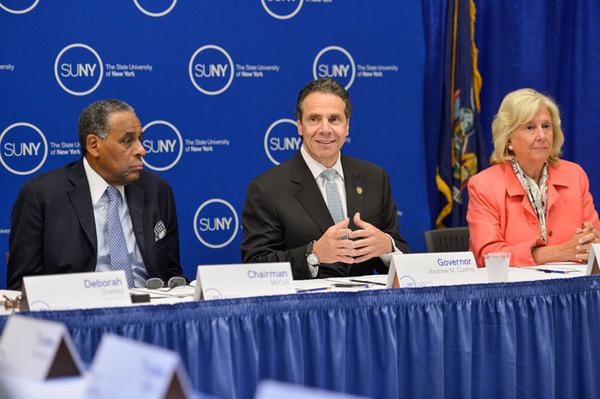 Total student loan debt in the U.S. is currently more than $1 trillion, surpassing credit card and auto-loan debt. This debt is not only threatening young graduates' ability to fully participate in the economy, but also suffocating too many families and middle-aged adults. According to the New York Federal Reserve, 30-year-old student debt holders are less likely to own a home and more likely to delay their own retirement.

Sixty percent of New York college graduates – nearly 3 million residents – incur debt, with a total of $73 million and an average amount of more than $25,000. To make matters worse, median wages for people between the ages of 25 and 34 have fallen in every major industry except healthcare.

Unfortunately, New York State has responded by cutting funding and increasing tuition. In fact, over the last two decades, average tuition and fees at public four-year colleges in New York have risen 127 percent while students continue to foot the bill. Since 2008, New York State cut nearly $2 billion to higher education. Tuition at the State University of New York (SUNY) has increased by $1,550 and at the City University of New York (CUNY) by $1,700. Those costs will continue to grow as a result of the NY SUNY 2020 "Rational Tuition Bill," which is scheduled to raise tuition at public colleges by $300 annually for five consecutive years.

After years of cuts to this $1 billion program that helps over 300,000 students annually, there are a number of important policy reforms that the state needs to consider. Fortunately, New York State Assembly Higher Education Chairwoman Deborah Glick is holding a public hearing in Albany on Wednesday, December 10 to review TAP.

While tuition continues to surpass the maximum TAP award of $5,165, universities are left to fill the gap for the most at-need students. This costs the universities tens of millions of dollars every year, which takes away from other vital needs. It's time for the State to increase the maximum TAP award to at least $6,500 to match public tuition and to take some of the debt burden off of New York families.

In addition, the fight over the NY DREAM Act has gone on long enough. It's time to allow all young people – including our undocumented youth – the opportunity to pursue their dreams. Governor Cuomo must include funding for undocumented youth to access state financial aid – including TAP – in this year's budget. The cost would be less than 2 percent of the total TAP budget and would not take away from other students who currently receive the award or will do so in the future. The Office of the New York State Comptroller estimates that extending aid to the state's 8,000 undocumented youth would enhance the earnings of individuals and grow the state's tax revenue.

The State needs to make it easier for part-time students to access aid and pursue a degree by eliminating the requirement that students attend college full-time for a year before becoming eligible for Part-Time TAP. From 1980 to 2012, the number of part-time community college students in New York increased by 193 percent, yet the State has been non-responsive to their growing need. What's more, even students who are eligible for Part-Time TAP can only receive six semesters of aid, which contributes to the college completion challenge.

This isn't just a problem for younger New Yorkers: TAP has historically left out lower-income working adults and must open access for all, regardless of age. Its current award schedule is based on the first year a student received an award, meaning that if a student first enrolled in a college in 1998 and received the maximum TAP award ($4,125 at the time), and that same student re-enrolled today, he or she would still only be eligible for the 1998 award level, notwithstanding subsequent increases to tuition or TAP.

Despite the many reforms needed to bring the program into the 21st century, the State did make two improvements to the program last year. For the first time in 14 years, it finally increased the award, adding $165. In addition, the final budget included a no-brainer reform to make orphans and wards of the State eligible for the $5,165 maximum award available to "dependent" students instead of the $3,025 maximum award available to "independent" students.

The state budget must reflect the values of New York residents. As Governor Cuomo begins to prepare his Executive Budget for next year, we must continue to remind him that high and preventable student loan debt caused by high tuition and inadequate state aid are not New York values.

***
Have an op-ed idea or submission for Gotham Gazette? Email executive editor Ben Max: This email address is being protected from spambots. You need JavaScript enabled to view it.