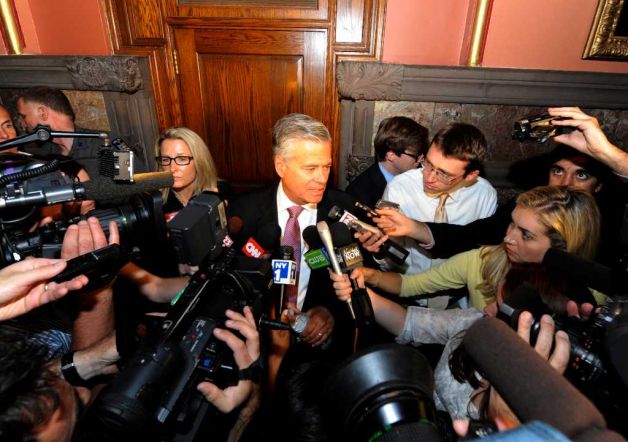 The decisive GOP return to control of the New York State Senate has been attributed to many causes: disproportionate resources, clever campaign tactics, individual candidate strengths and frailties, the coattails of a nationwide "Republican sweep." All are plausibly contributory to this impressive Republican win. Most important, however, are these four structural and tactical factors: gerrymandering, a strikingly smaller electorate, selective voter drop-off among those who turned out, and systematic statewide inter-party coalition building.

New York did its typical bi-partisan gerrymander in 2010. Republicans designed the Senate districts; Democrats did those for the Assembly. Nonetheless, in 2012 there were a number of unexpected GOP losses in areas of rapid demographic change, for example the Hudson Valley. After his vote for same sex marriage, long time Dutchess County GOP veteran Senator Steve Saland was knocked out in a three way race. In a neighboring district across the Hudson, Democrat Cecilia Tkaczyk used late big-money backing to win by a hair's breadth. Republican victories this year in both of these same GOP designed districts might be regarded as "a return to gerrymandered normal."

The electorate was unexpectedly small. A smaller electorate favors Republicans, who are disproportionately in demographic groups that are more likely to vote. The reasons:

This said, turnout was a million votes lower in 2014 than in 2010, the previous gubernatorial year. Why?

There was an incumbent governor running, with little perceived competition. The top of the ticket race thus did not bring voters to the polls. Andrew Cuomo also benefitted from the deterrent effect of a massive political bank roll and a record that appealed to right-center voters. Though he ran a lively campaign, Rob Astorino, the Republican candidate for governor, suffered from the self-fulfilling prophecy problem. He was written off early and relentlessly by analysts as an under-funded sure loser.

Many normally Democrat voters were mad at the governor: disaffected government reformers and social-activist liberal Democrats to his left, public employees in the center.

Additional evidence that Democrats disproportionately did not vote is that low turnout was not evenly distributed across the state. About half the proportion of eligible voters in overwhelmingly Democrat New York City (21.1%) cast ballots compared to voters outside the city (42.6%).

Politics generally is in disrepute. A November, 2014 Pew Research Center report documented that trust in government continued at "historic lows." Stay-at-homes may not participate because "voting 'just encourages them.'"

Add in another usual pattern, down-ticket voter drop-off. About 10% of the people who came out to vote cast no ballot in a Senate election. We can't tell what party each of these 381,000 voters might have favored, but we know that these down-ticket dropouts lived disproportionately in Long Island and upstate districts that elected Republican Senators.

All this resulted in a Republican total for Senate candidates (1,355,591) about 175,000 greater than Rob Astorino's for Governor, and just 26,385 fewer than cast for all Senate Democrat candidates in this dark blue state.

Then there's what New York pols call "the cross." Cross-endorsed candidates for office in New York may run on multiple party "lines." While much attention focused on whether the Republican/Independent Democrat (IDC) coalition would persist following the election, there was little given to the systematic pre-election coalition that the Republican Senate campaign effort cemented with the Conservative and Independence parties. The Republicans wrote off 15 Senate districts entirely (13 in NYC), and had mere token candidacies in at least another seven. This left 41; in 34 of these GOP candidates, whether challenged or not, had both the Conservative and Independence Party ballot lines. With few exceptions, Democrats with the Independence line were either unchallenged or IDC members.

The total Conservative vote in Senate races (251,103) exceeded that on this line for the race for Governor. The Independence total for Senate contests (185,427) was more than double that for Andrew Cuomo at the top of the ticket, even after removing Mark Grisanti's 21,826 votes in the unusual four-way contest in Erie County's Senate District 60. Almost all of these third party votes went to Republican Senate candidates.

Focus on these particulars brings into question any prediction of an incipient GOP resurgence in New York State politics. Many senior Republican Senators are aging; so are many of those who voted for them. Republican Senate candidates got clear majorities of those that turned out in fewer than half the districts they won (15 of 32) and in nine of these there was no Democrat on the ballot. If patterns hold, as they likely will, the 2016 New York electorate will be about two million or more voters bigger than that of 2014. And specific circumstances in the presidential race - e.g. a Hillary Clinton candidacy - may drive the New York participation up even further. Cross endorsement is volatile, and sometimes two edged. The base of GOP power in New York State government is still most fragile. If the GOP planning to protect its win did not begin on the morning of November 5, 2014 (the day after Election Day), it started too late.

***
Gerald Benjamin, Distinguished Professor of Political Science, is director of the Center for Research Regional Engagement and Outreach at SUNY New Paltz (CRREO).

Sadie Godlis, a major in Political Science, is a student researcher at CRREO.