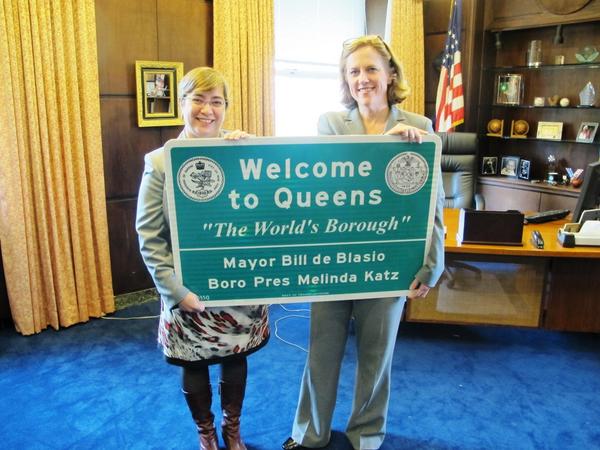 Lonely Planet travel guide recently named Queens as the number one destination on its 2015 Best in the US list, even calling it the "next Brooklyn." The New York Times, New York Magazine, and a flock of influential food, culture, and real estate bloggers agree, Queens is on the rise. Manhattanites who once might have moved to Brooklyn now consider relocating to Long Island City or Astoria for lower median rental costs, often-larger apartment units, affordable neighborhood amenities, and proximity to Midtown Manhattan.

Though Queens has been relatively untouched by the development and population shift that dominated much of Brooklyn over the past decade, the success of new luxury residential developments in western Queens, and large development projects in Flushing, Corona, and Willets Point have developers dreaming of new glass high-rise residential towers, restaurateurs salivating over customers willing to drop $17 on dinosaur kale salads, and bar owners anticipating sales of $14 muddled cocktails.

Mindful of the downside that follows uncontrolled growth, New York City and Queens must plan ahead to ensure that Queens remains vibrant, economically and culturally diverse, affordable, and unique.

On the eve that Queens threatens to become "the next Brooklyn," New York City must quickly takes steps to insulate the community from the harm that unbridled gentrification might bring. Queens has the opportunity to get it right; we can simultaneously welcome new neighbors and preserve existing communities and cultural resources. Strategic, coordinated county-wide planning must place the unique cultural aspects of Queens on par with development.

The largest borough has much to offer newcomers and long-time residents alike. The county is served by several subway lines, and is home to the city's airports, nationally respected museums, the Mets, and the US Open. The county is geographically diverse, with enviable views of the East River, Queensborough Bridge, and the Manhattan skyline; beautiful beaches to the east, and picturesque parks and neighborhoods in between. Queens has the second largest, though most diversified, borough economy, and good public schools.

However, its most remarkable and unmistakable quality, the unique asset that separates Queens from other boroughs, is demographics. Queens is the most diverse large urban area in the United States. Half of Queens' residents are foreign born. Its citizens make up about 100 nationalities and ethnicities and speak 140 languages. Flushing hosts one of the largest and most vibrant Chinatowns in America. A large Greek community lives in Astoria. South Asians and Central and South Americans prosper in Sunnyside and Jackson Heights. In Corona, a long-term Italian-American neighborhood has enjoyed an influx of Latin-American residents and businesses. Other communities, including Egyptians, West Indians, and Irish, prosper as well.

With one of the five boroughs' largest African-American communities, Queens is a significant cultural stronghold with a rich history. Charlie Parker, Ella Fitzgerald, and Louis Armstrong lived there during the Jazz Era. Armstrong's home is now a museum, and it regularly hosts live outdoor jazz performances. A number of contemporary African-American musical artists are from Queens, including 50 Cent, Nicki Minaj, LL Cool J, Mobb Deep, Nas, Run-D.M.C, and A Tribe Called Quest. Two prominent African-American theater companies are based in the county.

Long regarded as a bedroom community, Queens residents are family-oriented and middle class, with 68% of its residents living in family units, and 29% with children. Home ownership rates are nearly double that of Manhattan, Brooklyn, or the Bronx.

Queens boasts the most diverse religious community in America. There are 200 houses of worship within a 2.5 square-mile, densely populated Flushing neighborhood, including half a dozen Hindu temples, two Sikh gurdwaras, over 100 Korean churches, and many mosques, churches, and synagogues.

New York City has a number of tools that could be used to help maintain what is unique about Queens.

Skyrocketing rents and unrealistic real-estate price hikes that accompany gentrification push out long-term residents, and invite unwanted speculation. Safeguarding the community requires preservation of affordable housing. The City's inclusionary housing program should be mandatory, and targeted expansion of the City's homeownership assistance program to vulnerable populations can help attract and retain neighborhood culture. Non-profits should be encouraged to buy housing units in designated areas so long as they rent to economically vulnerable populations at below market rates.

Communities remain viable and resilient when neighborhood businesses prosper. Queens is an amazing patchwork of 40,0000 small businesses that support their owners and create local jobs. Many of these businesses cater to specific ethnic communities and thereby help to ensure a vibrant, culturally diverse environment. To help protect existing business, and encourage new ventures, the City can aggressively expand the reach of its Business Improvement District (BID) program within Queens to help with business development, capital improvement, marketing, public area maintenance, and representation before city government. The City can also implement cultural preservation districts to help prevent displacement of local business and cultural anchors.

The New York Economic Development Corporation (EDC) should continue to encourage land-use planning that incorporates local manufacture and light industry in order to bring good, well-paid jobs to the borough, and tamp down overzealous real estate speculation. The City should facilitate incubators focused on development of local entrepreneurial ventures. While encouraging business development, the City must continue to regulate "big-box" and chain stores that pay low wages, insufficient benefits, unfairly compete with local business, and funnel money out of the community.

Current state law does not allow New York municipalities to control the minimum wage within their boundaries. The De Blasio administration should continue to advocate for local control in order to raise the minimum wage and thus increase economic stability and purchase power.

The promise of Queens is not in what might be imported, but what is already here. But change is inevitable. Instead of framing gentrification as a zero sum game, the City should encourage a vision of neighborhoods as shared space, where the benefits and talents of new and often affluent residents are valued, while local businesses and cultural institutions are protected with public investment of money and expertise.

Though Queens is less vulnerable to gentrification due to the high level of homeownership, large numbers of people living in family units, substantial and healthy local business, and a solid middle-class base, the probability of permanent change that diminishes the unique character of the borough is high. By ensuring communities have adequate stock of affordable permanent housing, vibrant and diverse businesses that cater to local needs, and a government that prioritizes diversity along with economic development, Queens will be the face of America as a model of diversity, economic opportunity, and good quality of life.

***
Michael Greenberg is an attorney and Queens resident. Find him on Twitter @GreenbergSez.