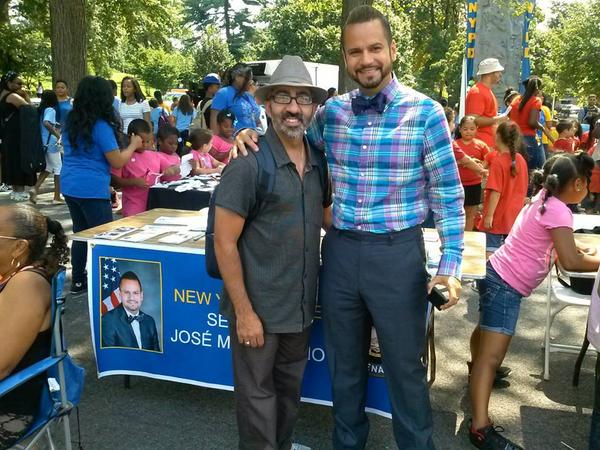 With the 2015 Senate session rapidly approaching, the time has come for all legislators to outline their priorities for the new year. Putting the previous elections behind us, the time has come for all of us to work together for the common good. The people of New York State are far less concerned with the political squabbles in Albany, they're demanding real action now.

I, for one, remain hopeful that all senators can find common ground while working together in a constructive manner to address many of the issues and concerns the voters have entrusted us to tackle. While new issues present themselves on an almost daily basis, some long-standing problems have lingered for years without substantive action.

On various issues like the DREAM Act, the Women's Equality Act, and raising the minimum wage for hard working New Yorkers - the time is long overdue for positive legislative measures. Other issues, such as rent regulation laws, require immediate action and will be at the forefront this year. Additionally, tragic events have recently shined a bright light on the need to reform the criminal justice system in ways that will inspire confidence and ensure equal justice for all New Yorkers.

Perhaps this year's biggest battle in Albany will revolve around New York City's rent regulation laws, which are set to expire on June 15. I will join many of my progressive colleagues in fighting to pass pro-tenant legislation. We will fight to ensure that average, hard-working New Yorkers can remain in their homes and raise families in a city that isn't exclusively for the very wealthy.

Ensuring high quality housing for the working class is essential to New York maintaining a robust local economy. For too long, we have been moving in the wrong direction when it comes to affordable housing. Estimates suggest that roughly 400,000 affordable housing units in New York City have been lost over the last 12 years, which has only served to further squeeze the poor and middle class.

To help combat this alarming trend, I am proud to sponsor bill S1040, which will repeal the often-exploited "statutory vacancy bonus." Currently, landlords unfairly benefit from the statutory vacancy bonus by increasing the rent up to 20% in the event of a vacancy of an affordable unit. Each time a landlord is able to increase rents in this fashion, they get closer and closer to the decontrol threshold, until eventually the apartment is phased out of rent regulation and removed from affordability status. The negative result of this has been that many New Yorkers are forced to leave their homes in search of more affordable places to live. My bill, along with other pro-tenant reforms advanced by the Democratic Conference, would help change this and ensure that affordable housing remains affordable.

Recent, highly publicized cases, both nationally and locally involving police and civilian interactions have created a firestorm of debate both in the media and on our streets. This debate focuses on much needed reforms to our criminal justice system which are designed to inspire confidence in the system. Toward that end, my Democratic colleagues and I have recently announced the introduction of a legislative package implementing a permanent Office of Special Investigation to review any interaction between a police officer and an unarmed civilian that results in the death of that civilian. I wholeheartedly believe that the overwhelming majority of police officers work honorably, while showing great restraint and respect for the communities they serve. They risk their lives each and every day to ensure that we can live in safe communities and raise our families without fear of criminals. When there are questions about conduct, I feel it's important that an independent and transparent process be implemented to ensure that communities feel confident that justice has worked its course.

Our nation was built by generations of hard-working immigrants who came to America seeking new opportunities. The DREAM Act would honor this legacy by giving immigrant students access to higher education, and with that a chance at achieving the American Dream by providing undocumented students access to financial aid. Despite the Democratic Conference providing an overwhelming amount of votes in support of this legislation, we unfortunately were not able to make this DREAM a reality. The DREAM Act is not only the right thing to do, but a common sense way to ensure we have a well-educated workforce ready for the challenges of the future. As the immigrant population continues to grow throughout the state, it's my hope that we can work together to show our friends across the aisle that every student, regardless of documentation, deserves the opportunity to achieve their dreams.

Passage of the full 10 point Women's Equality Act is another major objective of the Democratic Conference. The Women's Equality Plan was proposed by Governor Cuomo in order to bridge the gender gap that (shockingly in this day and age) still remains in so many segments of society. This plan not only promotes fairness and equal opportunity for the women of New York, but it also bridges income disparities due to gender discrimination. The complete 10-point Women's Equality Plan is a commonsense approach to achieving equal pay, alleviating sexual harassment in the workplace, ending family status discrimination, and, so importantly, protecting a woman's freedom of choice. Numerous polls have shown that the majority of New Yorkers support the full 10-point plan and it is imperative that we put the State of New York at the forefront of women's rights.

Continuing the fight for fair wages and combating income inequality is another top priority for 2015. It is heartbreaking that over 1.1 million hardworking New Yorkers struggle to provide for their families, and live below the poverty line despite having full-time jobs. If we are able to increase the minimum wage, individuals will invest more in their local economies and help generate greater prosperity for communities throughout New York State. The cost of living in New York State is growing increasingly more expensive and wages are not climbing at a similar pace, and this is especially true in places like New York City. Our city has the highest cost of living in the entire state, making it harder for families to pay their rent and put healthy food on the table for their children. Therefore, we will also be fighting to allow New York City to set its own minimum wage.

Our work in Albany will not be limited to the issues highlighted above. Every member of the Democratic Conference will have their own personal priorities and legislation. As the Ranking Member on the Senate Committee on Cultural Affairs, Tourism, Parks & Recreation, I will continue to fight for more arts education in our classrooms while pushing for better compliance with regulations that mandate music and art be taught in all schools. I will advocate for preservation of and improvements to our beloved state parks, while working to further promote our cultural sector as the major economic engine that it is. Studies have shown that investments in our state parks yield a 5:1 return. Each year seems to be record-breaking for tourism in places like New York City - and we have our cultural institutions and organizations to thank for that.

Just as I have throughout my career, in 2015 I will continue the fight for improved ethics and transparency within New York State government. An updated ethics package will strengthen our campaign finance rules by increasing transparency and punishing those who abuse their position in government. One of my bills would establish a review process for member items (S.920) while helping to root out corruption and conflicts of interests in a process often veiled in secrecy. My legislation will ensure transparency and inspire confidence, while giving power back to those who know best the needs in their community - the local elected officials. This measure, combined with campaign finance reform and others, represent huge steps we must take towards restoring public confidence.

As the Chair of our Democratic Conference, it is an honor for me to work with such a dedicated and energetic group of individuals. I am proud of all we have accomplished, but I'm far more excited about the work that lies ahead. I have spent my nearly 14 years as an elected official, both in the New York City Council and the State Senate, working hard to build coalitions, bridge gaps and find common ground while fighting for issues that our communities demand action on. Whenever partisan politics are put aside, good things happen and our constituents are the greatest beneficiaries. I look forward to joining my colleagues in Albany in the coming months as we tackle the tough work before us.

***
State Senator Jose M. Serrano represents District 29, which includes parts of the Bronx and Manhattan. Senator Serrano is the Chair of the Senate Democratic Conference and serves as the Ranking Member of the Senate Committee on Cultural Affairs, Tourism, Parks and Recreation. Find him on Twitter at @SenatorSerrano.