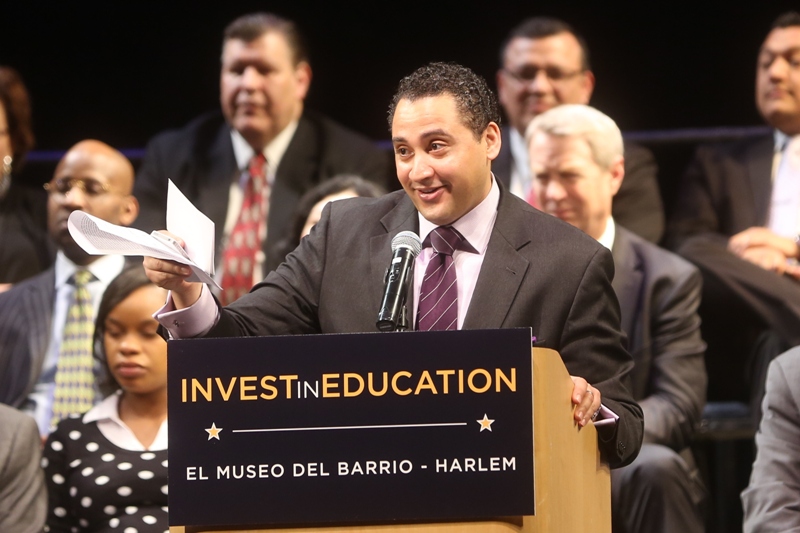 AM Rodriguez speaking at a community event (photo: @_rjayrodriguez)

As it currently stands, NYCHA's 2602 buildings spread across 334 developments, serving more than 615,000 people, are in need of $18 billion for major building repairs and upgrades. The area I represent in East Harlem has the highest concentration of public housing in the State. This state of disrepair is both a natural result of aging housing stock and a failure to properly invest in the regular maintenance of these buildings. The plan recently introduced by NYCHA to sell a 50% stake in six developments in exchange for an immediate cash infusion is an intriguing approach to this massive problem, but this deal requires closer scrutiny. Furthermore, it raises significant questions about the federal government's future role in providing housing subsidies.

There is no doubt that the massive needs of these buildings to meet even the most basic standards of living for NYCHA residents will require creative thinking. As a proponent of Public Private Partnerships, I can appreciate the role of the private sector in working with the government to provide better services and encourage it. The deal raises significant capital dollars for these buildings and others in the portfolio, where little or no money existed before. Based on the original financing structure, we are told it is not replicable across the portfolio. On the surface, raising money to fix the buildings makes sense, but there is more to any deal involving NYCHA. In fact, I struggle to see how this fits into the long-term affordable housing plan for New York City. Is this "pilot" part of a larger plan to diminish the City's stake in housing?

The recently revealed plans include private developers, paying $150 million for the initial sale in exchange for 50% interest in the six developments. NYCHA is also set to receive $100 million over the next two years and an additional $100 million in revenue over the next 15 years. Making this deal work for the developers is that the federal government would now be paying the developers the difference between the rents that are currently being collected and market rate rents. Also in the deal, the developers will be able to sell tax-exempt bonds and federal tax credits for the 30-year life of the deal. At the expiration of the contract, the developers may be given the option of buying the remaining 50% interest and turning all of the apartments into market rate units.

The biggest red flag in this deal are the details, or lack thereof, surrounding the developers' ability to take the units to market after 30 years. As we've seen with the Mitchell-Lama program across the state, a failure to ensure permanent affordability upfront has led to thousands of affordable units vanishing. With diminishing commitments from the federal and state governments, NYCHA will almost certainly be less empowered to keep their stake 30 years from now. I've asked NYCHA to consider a deed restriction, which would require the property be kept as affordable housing in perpetuity. It's not enough to "promise" not to sell after 30 years; a more permanent legal protection is required.

NYCHA's partner selection, particularly the absence of an MWBE business partner, is also troubling. With both the City and State applauding their improvement in engaging with minority and woman partners at the MWBE conference this past October, and the commitments of the de Blasio Administration to MWBEs, this strikes me as a perfect opportunity to expand these relationships. With two of the developments included in this deal, Milbank-Frawley and East 120th, located in East Harlem, we have no shortage of local minority-owned developers, contractors, property managers, or workforce providers that could have participated in this deal.

Another concerning aspect of this deal is the property management contract, which has been awarded to an affiliate of the developer as a bundled service. NYCHA maintains that in its ownership role it has the ability to fire the property manager if it finds the manager's performance to be negligent. It seems like we have the fox looking after the coop. How can NYCHA, which has historically failed to perform its duties as property managers, be the sole arbiter of negligent performance? Furthermore, the business partnership between NYCHA and the developer is inherently a relationship that would make any change in management company a challenge. If this is a model the City is looking to expand upon in the future, how are we able to protect our tenants from neglectful management?

It is our responsibility to approach this problem in a way that confronts the challenges of today, while ensuring that the New York of tomorrow provides equitable opportunities. Unlike the previous administration, which claimed that prior infill development or privatization attempts were exempt from the ULURP process, I ask that Mayor de Blasio allow closer scrutiny of this deal and add additional checks and balances to ensure we are meeting our responsibility to provide high quality public housing.

Most important, this is the sort of solution that results from the current model of federal HUD (Housing and Urban Development) funding. I think we should allow ourselves to think more broadly about how the federal government supports housing and ensure that a larger stake is invested in the community and the current residents themselves. This starts with ensuring that local and MWBE developers are given an opportunity, and this extends to property management, construction jobs, and the other areas of economic impact. I look forward to having this conversation with Mayor de Blasio, the City Council and, most critically, the community members themselves.

***
Robert J. Rodriguez is a State Assemblymember Representing East Harlem/El Barrio and the Upper East Side. He is the Chair of State's Mitchell Lama Subcommittee and a Member of the Housing Committee.