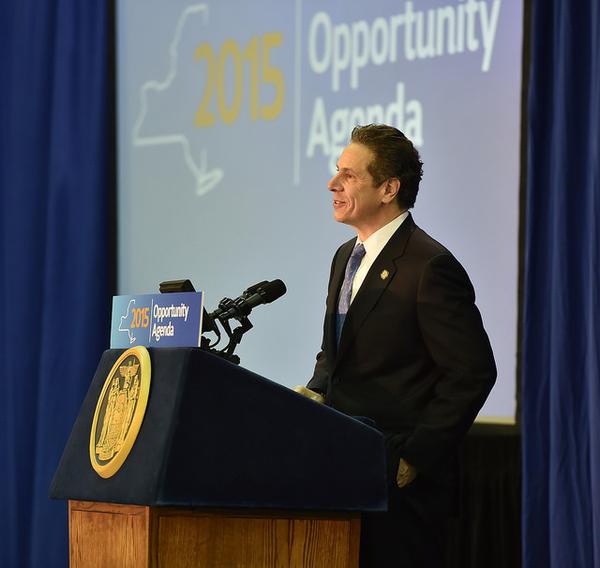 Just over 2.8 million New Yorkers hold nearly $74 billion in student loan debt. Governor Cuomo’s Get on Your Feet Loan Forgiveness Program wouldn’t even help one percent of them with their debt, even when fully phased in.

The proposal would apply to New York State residents who graduate from college in the state, continue to live here, and make less than $50,000 per year. It would allow those New Yorkers to pay nothing on their student loans for the first two years out of school. Instead, the State would make loan payments so long as debt holders are participating in a federal program - the Pay As You Earn (PAYE) income-based loan repayment program – an option that forgives the remainder of a federal loan after 20 years of consecutive monthly on-time payments or 10 years if you're enrolled in the Public Service Loan Forgiveness Program.

It’s great that Governor Cuomo is thinking about the student debt crisis by helping a few recent graduates get on their feet. However, without addressing the high and rising cost of going to college, which is the root cause of high and rising student debt levels, debt will continue to cripple an entire generation’s ability to fight ever-growing inequality. Some are referring to bleak employment prospects, unemployment rates, and low wages for young people as the “Lost Decade” effect.

This unprecedented student debt crisis continues to impact economic markets like housing. According to a report by Young Invincibles, the average single student debtor is likely ineligible for a typical home mortgage due to their debt-to-income ratio.

It’s important to note that this wasn’t always the case. Prior to the Great Recession, homeownership rates of those with a history of student debt were substantially higher than those without. This is because earning potential is higher for those with degrees. However, despite it being a buyer’s market, student loan debtors are still less likely than non-debtors to buy a home.

The biggest growth in student loans came in the past decade, as student debt rose an average of 14 percent per year from $364 billion in 2004 to over $1 trillion today, according to the New York Fed. To be fair, total student debt has ballooned in part because more people are going to college and therefore taking out student loans. It’s good that more people are earning college degrees. However, that’s not the only contributor to the ballooning of student debt. The cost of getting a bachelor’s degree is 12 times higher than it was 35 years ago, far outpacing medical care, housing, and all other commodities – and that’s accounting for inflation.

New York is no outlier. State tuition has increased by nearly 130 percent at New York’s public four-year colleges over the last two decades. Tuition at the City University of New York (CUNY), which was once free for all city residents, will increase nearly 60 percent from 2008 to 2016 alone. Meanwhile the state’s Tuition Assistance Program (TAP) remains grossly inadequate. This is why 60 percent of New Yorkers graduate owing student loan debt with an average amount of $26,381.

To seriously address the student debt crisis in New York, Governor Cuomo must:

The shared value in the above four policies that the state requires is simple: an increase in the capital that can be reinvested into the New York economy in other ways by reducing the monthly and overall amount of student debt that New Yorkers are paying.

It’s time for the governor and state policy-makers to start thinking differently about higher education and student debt. Most of the conversations happening around student debt policy don’t actually reduce payments or forgive debt. Instead they make loans cheaper or easier to repay - this type of thinking will only further fortify the crisis that is already having long-term negative effects on millions of people and the American economy.

But, implementing policies that reduce debt owed and forgive total debt will dig us out of this hole, and propel us into a brighter economic future.