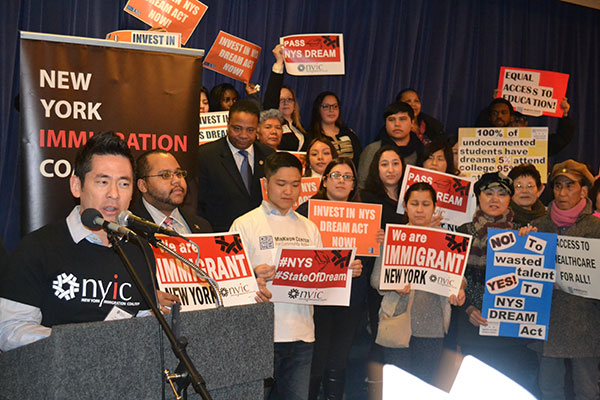 The author at a rally for the DREAM Act

Texas, a red state; California, a blue state; and New Mexico, a purple state; each has adopted its own version of the DREAM Act.

In New York, the DREAM Act enjoys the support of editorial boards as varied in their opinions, politics, and geographical concerns as Newsday, the New York Post, Rochester Democrat and Chronicle, the New York Times, the Albany Times Union, and the New York Daily News.

So why did the New York DREAM Act go down in defeat—narrowly—in the Legislature last year? Mostly because of fear and anger stirred up by opponents through the spread of misinformation.

If New York is to enact the DREAM Act this year and make the commonsense investment in its workforce and future that editorial boards, elected officials, and New Yorkers across the state are calling for, we need to separate the fact from the fiction.

Fiction: The DREAM Act will take money away from students who were born in this country and give it to those who were not.

Fact: New York's Tuition Assistance Program (TAP) is an entitlement program. Each and every student who meets the TAP income eligibility and other requirements is entitled to financial aid—no matter what. The additional cost of providing TAP dollars to Dreamers is estimated to range between $17 million and $27 million, about a .00018% increase in the state budget.

Fiction: The DREAM Act will reward people who broke the law.

Fact: Punishing young people for something their parents did is not the American way. And let's not lose sight of the fact that what the parents of Dreamers are guilty of is wanting a better life for their children, like generations before them and generations to come.

Fiction: The DREAM Act doles out tax dollars to people who themselves don't pay taxes.

Fact: According to a study by the Institute on Taxation and Economic Policy, undocumented immigrants contributed an estimated $744,276,000 New York State taxes in 2010. At the federal level, the Social Security Administration each year keeps $6 billion to $7 billion in social security contributions from W-2s that cannot be matched with a correct social security number. The vast majority of that money comes from undocumented immigrants who are forbidden by law to access many of the most basic government services which they help fund.

And the Fiscal Policy Institute has calculated that bachelor's degree holders pay an additional $3,900 in annual state taxes, meaning that TAP funding for the undocumented would more than pay for itself within six years.

In other words, making college more affordable for all is a smart investment in workforce development and our state's future. The more educated our workforce, the better it is for our economy - and Dreamers will most certainly be part of our workforce. They don't know any country other than the United States. Their futures are here.

Let's follow the bipartisan example of the five states that have already passed a DREAM Act. Let's come together in New York and make the DREAM Act a reality.