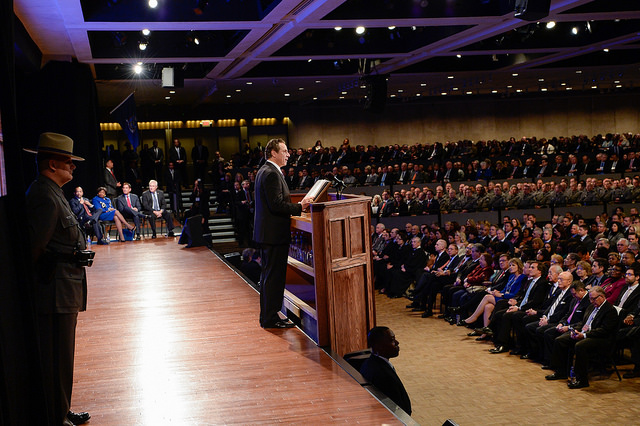 Gov. Cuomo (photo via The Governor's Office on Flickr)

Can legal restrictions halt corruption in the state Legislature? History suggests that they are necessary but limited.

A new ethics law, more of the same
Several state legislators have been charged with corrupt practices in recent years and the leaders of both houses of the Legislature found guilty of violating federal laws. Sheldon Silver and Dean Skelos are headed to prison unless their appeals succeed. The Legislature considered several basic remedies in the 2016 session. It passed a bill championed by Gov. Andrew Cuomo at the very end, introduced so late in the session that many leaders did not have time to read it and speeded through with the help of a "Message of Necessity" from the governor, which enabled the Legislature to dispense with requirements for deliberation that would at least have provided time for news media and other watchdogs to dissect it and legislators to read it.

After waiting as long as possible, the governor signed it in late August with no public ceremony and only a brief statement that “New York is taking aggressive action to restore the people’s faith in government and increase accountability and transparency in the electoral process.”

"They needed an ethics reform so people knew they could trust Albany and this is a great first step," he added. "If people don't trust the system, the system can't function." That was a tepid endorsement at best. This is the fourth state ethics bill that Cuomo has signed and this one has almost nothing to do with the practices of state lawmakers.

The new law places new restrictions on independent expenditure campaign contributions but does not close the so-called "LLC Loophole,"which allows firms that control several limited liability companies to multiply the means of giving to campaigns. It doesn't restrict legislators' outside incomes or create blockades against a pay-to-play culture of campaign contributions and government decision-making. One of the things that it does do is force issue-oriented lobbying groups to disclose more donor information. That may undermine some of the good-government groups that pressed for more sweeping ethics legislation.

Dick Dadey, executive director of Citizens Union, a government reform group, is among those who have said that the law is probably unconstitutional. Dadey said that "my organization's board was astonished by this piece of legislation."

"Common Cause/NY is deeply disappointed that Governor Andrew Cuomo has chosen to ignore the causes of systematic corruption in Albany, and instead wrongfully punish organizations' proper and lawful collaboration to more effectively advocate for their causes,” said its executive director, Susan Lerner.

Business, money and politics -- an old story in New York
As noted, Gov. Cuomo calls this new law a good first step. But is it really that?

In his annual message to the Legislature, the governor denounced "political contributions by business corporations" as "morally wrong....Its contributions are influenced by business and not by patriotism and, like other investments, are made in the hope and expectation of financial return or to avert threatened pecuniary injury." The governor recommended making political payments by corporations a criminal offense.

Higgins was reacting to the long history of scandals over corporate funds swaying political elections in New York,  allegations of large secret corporate campaign contributions in the 1904 presidential election and the 1905 mayoral election in New York City, and a recent legislative investigation that had revealed insurance companies spending to influence legislation affecting them.

The Legislature took up and quickly passed three pieces of legislation. One prohibited corporate campaign contributions. Another required candidates and political committees to make public a record of their campaign receipts and expenditures. A third redefined corrupt practices by defining what campaign expenditures were acceptable. They went into the statute books as chapters 239, 502, and 503 of the Laws of 1906.

Since then, the campaign ethics laws have been amended and updated, and impacted by court decisions. But the role of money in politics has continued. There have  been lots of legislative scandals, but they have usually led to meager ethics reform, as they did this year.

That sounds like the rationale for Andrew Cuomo's seeming casualness about ethics reform this year.  Actually, it was his father, Mario Cuomo, in 1987, explaining yet another stunted reform initiative.

What might help, beyond the law and the prosecutor?
Legal proscriptions, and vigorous prosecution of corruption, such as that carried out by U.S. Attorney Preet Bharara in recent years, are essential to good government. But history suggests that other factors are also important:

* The tone starts at the top. If the Speaker of the Assembly and the Majority Leader of the Senate are models of probity, they set the right tone and their example may cascade down through the two houses of the Legislature. One example is Oswald D. Heck, New York's longest-tenured Assembly Speaker (1937-1959): scrupulous, honest, personally modest, but a very effective leader. Assembly scandals were very rare in his 22-year tenure.

*Real competition in legislative elections. It keeps incumbents on their toes, discourages ethics lapses that their opponents might use, and forces them to really explain and defend their records at election time. Throughout much of New York's history, most State Assembly and Senate seats were contested. More recently, particularly because of redistricting and gerrymandering, many districts are overwhelmingly Democratic or Republican. That discourages opposition, advantages incumbents, and may help promote a feeling of complacency.

*Giving rank-and-file legislators more power in their respective houses. The prosecution and conviction of Assembly Speaker Silver revealed his power to designate committee chairs and control the flow of legislation. Members of the Assembly's Democratic majority felt inclined, or compelled, to "go along" rather than take principled, independent stands that might have earned them the speaker's enmity. Silver stamped out potential opposition, e.g., from Majority Leader Michael Bragman who lost his position after challenging Silver for the Speaker's post in 2000 and resigned the next year.

Speaking in Albany last February, Bharara decried the complacency of legislators, whom he called "enablers" in the "rancid culture" at the Capitol. The current Speaker of the Assembly and Majority Leader of the Senate have both indicated they are giving more leeway to individual legislators. But still more is needed.

*Aggressive news media. Over the course of our history, the Albany press corps has exposed more corruption than any U.S. Attorney. Journalists’ vigilance and oversight help legislators avoid temptation. The hometown press follows, or should follow, local legislators' committee assignments, bills introduced, position statements, speeches, and to the degree possible, campaign contributions. The advent of 24/7 news, online forums, and social media can shed even more light and promote transparency.

*Widespread public frustration with government. Work by the Pew Research Center shows the distrust and disappointment. Public officials are seen as needing more integrity, values-based judgment, and application of personal ethics in their service to the public. Those are not easy things to impose by ethics laws or threats of prosecution for unethical or illegal acts. They are more deep-seated, character-based. Perhaps we should require every legislator, or at least every new one, to read Clayton Christensen's 2012 book “How Will You Measure Your Life?” It's about achieving a fulfilling life through ethically-based service to others, a reminder that pursuing -- or spurning -- corrupt practices is, fundamentally, a personal choice.