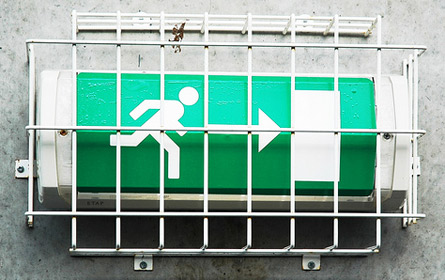 Every year, hundreds of inmates released from New York State prisons return to the streets of upper Manhattan. Many will not remain in the neighborhood for long. Instead, they will do something that puts them back behind bars again.

Despite the decline in crime over the past several years, upper Manhattan neighborhoods carry the heaviest burden when dealing with an aftermath of crime: reintegration of former offenders. Of all parolees returning to Manhattan, almost half go to upper Manhattan, according to the state Division of Parole. And in East Harlem between 119th Street and 126th Street, where more than 108,000 people live, 1 in 20 men have been incarcerated at some time, reported the Justice Mapping Center.

Spates of gun violence north of 96th and 110th Streets contribute to a murder rate quadruple that of the rest of Manhattan, the Upper Manhattan Reentry Task Force has found. Meanwhile, more than 45 percent of families in the 15th Congressional District, which includes Upper Manhattan, have a household income of less than $35,000.

For the average resident, the poverty and crime can add up to a tough situation. Parolees looking to start anew can face even greater hurdles as they try to avoid becoming become another recidivism statistic. Several programs, private and government-sponsored, have popped up uptown to address the needs of the formerly incarcerated. The goal: Keep them out of prison.

New York's jails and prisons offer various programs to inmates, including vocational and emotional, helping them adjust and prepare for life outside. Joseph Fargas tried that. Serving time for a gun charge, he joined classes on building maintenance, horticulture and anger management. But he got kicked out of each one for "acting crazy and starting fights," he said. Jail life seemed to foster more criminality.

"You put a person in a medium [and] the medium is a bunch of little kids running around acting stupid. I wasn't in that mind frame, but being in that medium, it makes you want to smack flames out of somebody," he said. 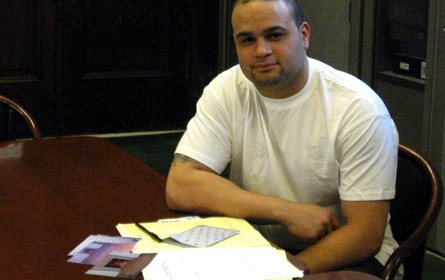 At Harlem Reentry Court, Braulio Rodriguez shows off photos of the floor covering skills he picked up in prison. Employment is one of his major obstacles in his transition to freedom.

Braulio Rodriguez, though, took advantage of classes in prison. He showed off the snapshots of his flooring work. In pictures, the retiled bathroom, faux fireplace and parquet floor look like they could be in any middle-class home. But, in reality, the floors were small spaces in upstate Cayuga prison set aside to teach inmates like Rodriguez how to install floors.

His opportunity to learn floor covering came, he said, after police caught him with cocaine. He said he was holding the drug for his brother, who was later deported to the Dominican Republic for his role in the crime. Rodriguez, from Washington Heights, spent 18 months in Rikers and 18 months in Cayuga.

"All my life I worked in the bread industry running routes," said Rodriguez, 28. "And when I went into jail they didn't have that," he said with a chuckle.

A dropout at 16, Rodriguez began academic classes in prison at only a fifth-grade level. He went on to get his GED in prison and also enrolled in a Cornell-sponsored course in international relations. His grade: B-.

Research by the Department of Correctional Services linked a decline in recidivism with college courses in prison. Despite that, the state does not budget funds to programs beyond high-school level. Of New York's 70 facilities, only 17 offer college programs. Only one program, in Wyoming prison, receives any kind of state support in the form of money. Federal grants, foundations, volunteers and private funding prop up the others.

With or without an education, released inmates return to no jobs or housing and to the same settings that led them to crime. This all makes it difficult to change. About 49 percent of those arrested in upper Manhattan had previous convictions, higher than the rate in the rest of the borough, reported the Upper Manhattan Reentry Task Force, a partnership of public, private and community-based groups.

Even with his job training and course work, Rodriguez cannot find a job. Paroled in November 2008 and armed with his new floor-covering skills, Rodriguez is advertising his work on MySpace. Through the site, Rodriguez, the father of two, got a job redoing a bathroom. He also recently completed work on a kitchen, he said. But he hasn't found a steady, long-term job in floor covering, or anything else. He thinks it has something to do with his record.

"That question, have you been convicted of a crime? There should be a follow-up, like what did you do in prison? How has your life changed? And what skills did you develop in prison?"

To foster job creation, the state has offered financial incentives to employers. The Work Opportunity Tax Credit allows employers to claim up to $2,400 in tax credits when they hire former felons.

A federal-state incentive, the Federal Bonding Program, offers free insurance for six months to employers who hire one-time inmates. Some employers may think former convicts pose a business risk, that, for example, a person arrested for burglary could rob the business. The insurance protects the employers and gives the former prisoner a chance to work.

An incentive program helped Fragas. After he left Rikers on parole, he quickly found work in maintenance at a Brooklyn grocery store that receives incentives for hiring ex-convicts. Employer-employee benefit programs could help other parolees in upper Manhattan, where, the reentry task force found, they are more likely to be unemployed than parolees in other parts of the borough.

The task force also plans to educate local businesses about reentry, said Kate Krontiris, the group's coordinator and manager at the Harlem Community Justice Center. This would familiarize the owners with parolees and possibly lead to new hires.

Employment and housing often go hand-in-hand. Six percent of parolees in upper Manhattan lived in homeless shelters last year, according to the Division of Parole. Finding a New York apartment is hard for all, but former convicts face even more obstacles. The New York City Housing Authority "has the right to deny persons with criminal records residency in order to provide a safe environment for all residents," its Website says.

Without housing, the chance of a former convict reverting to crime increases, according to some experts.

In Harlem, Exodus Transitional Community helps former offenders find jobs, which can lead to settling into a better living situation. The group began as a vision from inside a prison. Now it is a faith-based non-profit recognized by former President George W. Bush for its work in reentry.

Exodus offers practical services, such as food, Internet access and resume-building workshops. It also pushes the former convicts to set goals, involving fitness, spiritual concerns and relationships, said Alvin Valentine, a former inmate and an Exodus contract coach. Of Exodus' 263 participants in 2008, 123 found jobs, according to the group's data.

Before coming to Exodus, "I never had a job a day in my life and never had a desire to," Valentine said. "They gave me hope." 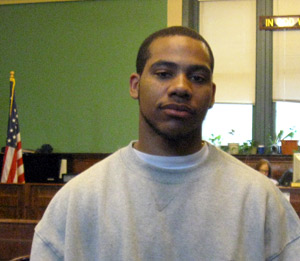 Joseph Fargas must regularly meet with his parole officer at the Harlem Reentry Court as he reintegrates. "Right now, my focus is staying out of jail," he said.

Other organizations offer housing. The Fortune Society's Fortune Academy in West Harlem provides beds and food to homeless reentrants. Further uptown, Assemblymember Adriano Espaillat, whose district covers such neighborhoods as Washington Heights and Inwood, said he is considering halfway houses as an option for reentrants.

To reduce recidivism the city uses 311 to reach out to ex-offenders. One call to the city's free line provides information on organizations that offer reentry services, including counseling, job training and housing.

The Lure of the Street

Jobs and housing do not exist in a vacuum. Some say the environments that lead to incarceration must be addressed, too. Upper Manhattan residents cite a slew of deep-seated issues, including gangs, drugs and poverty, that lead to crime in their neighborhoods. Others attribute high parolee rates to heavy police involvement in the mostly minority neighborhoods uptown.

Some former inmates tell tales of poor education and broken relationships, which led to bad choices and incarceration. Fargas used to run the streets of East Harlem toting handguns and hustling. "I was inspired by fast money, fast life," he said.

His first arrest was for assault -- at 13. Fargas' last arrest was for possession of a German Luger, he said. Now 21, Fargas said he didn't know his father growing up, so he sought comfort in the streets. He joined the Crips gang. He smoked pot. He was shot. He was stabbed. He almost died, he said. That was his life -- a dangerous one.

Fargas' tale resembles many: Children and teens, looking for a connection to someone, wind up on the streets getting their hands dirty.

Working with youth can play a big role in keeping kids from getting involved in crime. Espaillat's office participates in the city's summer job youth program and supports a myriad of after-school programs in his district.

In his district, where gang violence is emerging as a serious problem, Espaillat said he wants to get to kids before they get in the gangs. In collaboration with police, he said his office talks with families about how to recognize the signs that their children are getting involved in a violent gang.

At Exodus, volunteers mentor children of inmates to help them develop life skills and prevent their chances of repeating the criminal cycle and going to prison themselves. "There is a lot of data to suggest that the absence of one's parent increases risk for some -- not all -- kids of the incarcerated," wrote Krontiris.

Fargas said he's not interested in the gang life anymore. If he falters back into a life of crime and commits a felony, depending on the severity and circumstances, he's facing at least two years and at most life in prison. So, Fargas has a job, abides by the conditions of his parole and regularly appears in Harlem Reentry Court. Fargas says his mom is proud of his turnaround.

Some reentrants find the turnaround more difficult. Of offenders released in 2004, almost four in 10 returned to prison within three years. More than 28 percent of the recidivists were sent back because of a parole violation, according to the Division of Criminal Justice Services.

An upper Manhattan parole officer, who asked not to be identified, said she wouldn't violate a parolee for a minor incident, such as a traffic ticket or being approached by a police officer. Instead, she said, she sees her job as balancing the legal and social work aspects of managing her parolees. She said she recommends them to educational or substance abuse programs and advises them on how they can best succeed in their transition.

She also views her job as a way to protect the community. And when a parolee repeatedly misses curfew or moves without notifying her, she has to put her foot down.

"At the point where he refuses to listen, I know I care more about his freedom than he does," she said. The 11-year veteran added, "They're not all trying to be good. Some people are used to living their life the way they have. They don't see anything better."

Fargas said he's fine with abiding by the conditions of his parole, but one mandate does bother him. "How can you tell me I can't be around my co-defendant when he lives in the same building as me?" he said. "We grew up together."