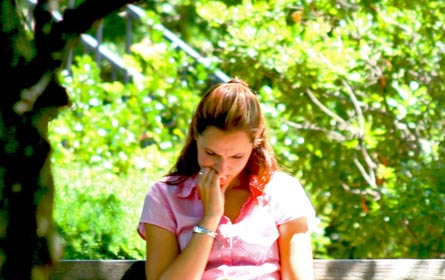 The purpose of the new law, which Paterson signed in July making it effective immediately, is to help protect domestic violence victims in hiring and employment practices. According to the governor, this will help give people "the ability to deal with the circumstances of their lives, and to achieve financial independence from their abuser and participate more fully in the economy."

The victim and perpetrator may be married, living together or dating; they may be in a traditional or non-tradition family; they may be gay or straight.

However, the law, an amendment to Executive Law Section 292, applies to employment only -- not, for example, housing or education.

Advocates say that many women remain in abusive relationships because they lack financial independence for themselves and their children. Becoming financially independent -- and able to leave the abuser -- often requires that the victim find and keep a job.

Being in an abusive relationship, they say, can make employment difficult. For example, a victim of domestic violence may need time away from work to confer with an attorney or domestic violence counselor, appear in court, seek medical attention, arrange for alternative housing or recuperate from injuries. Embarrassment or fear of losing the job may make the victim reluctant to inform her employer of the circumstances of her life. A victim may need time off or flexible hours as a protective measure. Employers may fear that a violent spouse or partner may show up at the workplace and cause disruption, fear and interfere with business.

By banning discrimination on the job against victims of domestic violence, this measure intends to help ensure the economic viability, as well as the physical safety, of victims.

"Assisting victims of domestic violence in keeping and maintaining employment provides a crucial pathway out of abusive situations. Protecting such victims against invidious discrimination in the workplace is an important step toward that goal," Paterson said.

The New York City Council had already amended the Administrative Code section 8-107.1 to make it unlawful for an employer in the city "to refuse to hire [or to] discharge from employment or discriminate against an individual in compensation or other employment practices because of such individual's actual or perceived status as victims of domestic violence." However, the city law does not apply to state agencies or to a city resident working or seeking work elsewhere in the state.

What the Law Will Address

There are few reported cases of victims of domestic violence losing their jobs for reason linked to their abuse. This could be because of confidentiality clauses in settlement agreements, because both the city and state statues are unfamiliar to the public, and of course, because of fear. Spokespeople and lawyers for major domestic violence organizations agreed, however, that the problem of discrimination exists.

They cited one example, wrapped in layers of confidentiality, that took place at a 2006 raucous Manhattan Christmas party given by a major corporation, a leader in its industry. A high-level employee quarreled with her boyfriend who soon left. She then told a staff member that the boyfriend sometimes was violent at home, although nothing of the kind had taken place at the party, which was held in a public place.

By the next work day, gossip and gross exaggerations had spread, and the woman was suspended and then fired. Prior to commencing a lawsuit under city law for unlawful termination as a victim of domestic violence, the woman and her lawyer worked out a settlement with the company. As part of an out-of-court settlement, the company agreed not to interfere with her future career, and she agreed to confidentiality as to the terms.

In Reynolds v NYC Department of Corrections, the city terminated a probationary worker after investigators went to her address to verify that she was out sick. She was not found at the address because she and her children were living in a homeless shelter due to domestic violence. In a 2004 decision, Justice Louis York concluded that she had been discriminated against under city law because of her status as a victim of violence in the home and was entitled to reinstatement and back pay.

Barbara Kryszko, director of Sanctuary for Families Brooklyn Family Justice Center Legal Project, represents domestic violence victims in their Family Court cases and sees the connection between her clients' home and work situations. She described one client who lost her job due to her partner's incessant calls to her office, harassing her and other employees. While she was given another reason for her dismissal, coworkers told her she was let go because of her partner's conduct.

Despite that, Kryszko said, the company may be able to document that she was unable to sperform her duties. "In all discrimination cases, the problem is proving that the firing was in fact illegal discrimination, rather than some other pretextual reason provided by the employer," Kryszko said. "You must consider how much of an accomodation an employer can reasonably be expected to to make. " Kryszko said that, despite protective legislation, proving discrimination "is an uphill battle for the victim."

Becoming Part of the Solution

Prior to her election in 2000, State Assemblymember Amy Paulin of Westchester, the bill's primary sponsor, was executive director of My Sisters' Place, a Westchester center for battered women. In her work, she found that the typical abuse victim might not be able to get or hold a job or become economically independent or free of her batterer. This may cause her to return to the violent situation she was trying to escape.

The problem of domestic violence, Paulin said, is "so serious, so prevalent, that we need to engage everyone or we are never going to solve it. Employers are such a significant part of our community that this is taking one small step toward eradicating it." Although the situation is "challenging for employers," Paulin said the business community took no position for or against the legislation.

She sees the legislation, which she had introduced three times before it was enacted, as sending "a message that employers should be more sensitive to victims of domestic violence and work with them and help them get out of a bad situation."

"Because a victim is unable to leave her abuser," Paulin said, "doesn't mean she won't have the strength to do other things to protect herself," if there are empowering tools available.