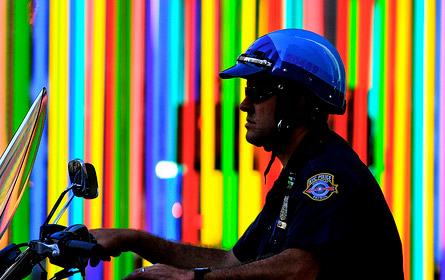 "Crime is down," is a phrase New Yorkers are getting used to hearing. The notorious peaks in crime during 1970s and '80s, when the city was thought of as dangerous and neglected, gave way in the late 1990s to a steady decrease that has given New York's politicians something to crow about. Mayor Michael Bloomberg certainly hasn't been shy about taking credit for the increased perception of safety on city streets.

"Under Mike, New York City's crime rate is at its lowest level in over 40 years," trumpets Bloomberg's campaign website. "Crime is down nearly 30 percent since he took office. New York is the safest big city in the nation and, under Mike Bloomberg, it will continue to be. Crime in New York continues to decline, including by 12 percent in the first six months of this year."

It's not that anyone disputes those crime statistics -- it's that some experts are not convinced that Bloomberg and his police department should get all the credit for the success. At the same time, civil rights groups say that while the city may be getting safer, the rights of many New Yorkers are being eroded.

How Low Can It Go?

"At the end of 2001 the consensus was that crime could not go any lower," said Deputy Police Commissioner Paul Browne, "but now we are down 35 percent lower than any of the Giuliani years, and the Giuliani administration built its reputation around crime fighting."

In fact, Browne said, if current trends continue, New York is on track this year to have the lowest homicide rate since 1962, when modern record keeping began.

It's not as if conditions seem exactly right for a steady decline in crime.

Bloomberg was elected following 9/11, when the new reality of terrorist threats diverted law enforcement funding, and the economy began to crater. Now, after several good economic years, the economy suffers from an even worse recession. Even the size of the police department has declined from a high of around 40,000 to around somewhere above 30,000 officers, but for the most part, major crime has continued to decline.

Preliminary FBI crime statistics show that New York remains the safest big city in the country, with the lowest crime rate per capita of the nation's 10 largest cities. Major felony crime has continued to drop from a five-year high of 136,491 in fiscal year 2005 to a low of 110,828 in fiscal year 2009.

How Did They Do It?

Andrew Karmen, a sociology professor at John Jay College of Criminal Justice in New York, said he has no explanation for how the crime rate remains low while job losses and poverty mount. The city's unemployment rate is the highest it has been in almost two decades. "No one knows for sure, but some entities like the confusion â€¦ because they can take credit for" the drop, said Karmen.

"The mayor has a very good relationship with his police commissioner," said Browne. "That may be obvious, but we speak the same language as far as technology and how it can advance police work."

The Real Time Crime Center collects tips from the public and information about crime in the city and combines it with computer mapping to give officers a better understanding of where crime is happening.

Karmen, however, wonders why New York doesn't do as some other cities do and make crime mapping data available to the public on its website. Karmen said there is a certain lack of "transparency" under the Bloomberg administration. According to Karmen, the police department also has stopped releasing a report that details the percentage of cases of major crime it solves each year.

A recent article in the New York Post stated that the department has about a 70 percent clearance rate for murder cases. In other words, 30 percent of all murders go unsolved. That number, as police officials point out, is above the national average of around 60 percent. But New York has historically performed better.

"They take credit for all these crimes they say they prevent," said Karmen, "but murder clearance has slipped from a high in 1998." At that time, Karmen said, the clearance rate was in the 80 percent range.

"The last report was issued in 2001," said Karmen. "Why did they stop putting it out? I know some information doesn't come out in a post-9/11 world, but why should information about basic crime be suppressed?"

Getting Rid of Guns

According to Browne, Bloomberg's crusade against illegal guns has made a major impact on crime in the city. With the help of his organization, Mayors Against Illegal Guns, the mayor has waged a full-out assault on the influx of guns into New York from out of state, and Browne said the impact can be felt on the street. "Stopping the flow of illegal guns into the city has been extremely important," said Browne.

"When there is pressure on the supply, you see the price go up. We now see a gun that you could purchase legally for around $155 and would normally sell on the street for around $230 is now selling for six to seven times that amount," he said.

Despite this, gun violence continues to be a problem in low-income areas. Experts like Karmen say that preventing gun violence in those neighborhoods cannot be achieved exclusively through police work. Instead, they say, social ills must be addressed through the education and economic opportunity to break the cycle of violence.

Civil rights watchdogs say that part of the police strategy under Bloomberg to reduce gun crime -- stop and frisk -- has not only violated the privacy of residents of poor neighborhoods but done irreparable damage to their futures.

Last year the police conducted 531,159 stop and frisks -- five times the number they conducted in 2002. And the majority (51 percent) of those people stopped were black. Thirty-two percent were Hispanic and 11 percent white.

Other large cities also use stop and frisks where people are asked for information and sometimes searched. The widespread stops began under the Giuliani administration as part of its effort to reduce crime by targeting nuisance offenses. The practice has steadily increased under Bloomberg.

"The mayor gives the police department carte blanche," said Donna Lieberman of the New York Civil Liberties Union, "and it results in the stop of hundreds of thousands of innocent New Yorkers each year."

Browne said the stops are "not disproportionate according to the descriptions given by victims."

The issue of stop and frisk has come up on the campaign trail this year with both Bloomberg and his challenger William Thompson describing the process as useful but in need of strong oversight.

Advocates say that stop and frisks negatively and unfairly affect minority communities. They say during stop and frisks officers will ask suspects to show anything they should not have. Then suspects who take marijuana out of their pockets so it is in public view suddenly can be charged with a misdemeanor for smoking and or displaying marijuana in public.

Karmen said that the police disproportionately stop and frisk minority suspects. "Studies show more white middle class kids smoke, but there is selective enforcement," said Karmen, adding, "Hispanics and blacks get records, preventing them from getting jobs and loans for college." The Civil Liberties Union released a target="new">report in 2008 showing what they say is a racially biased "marijuana arrest crusade."

Civil rights advocates say that the Bloomberg administration has slowly encroached on the privacy of city residents and expanded the role of the police. For example, they note that Bloomberg stationed5,000 school safety assistants and 200 uniformed police officers in city schools to combat school violence.

The city has hailed the program citing statistics that show violence in school has decreased 22 percent from 2002 to 2008. United Federation of Teachers President Randi Weingarten has celebrated the effort, telling the New York Post, "The work we've done together with the NYPD has, by and large, created safer schools. We've figured out how to defuse situations."

But the Civil Liberties Union says the city has put school discipline in the hands of the police department. There have been reports of children under the age 16 being arrested, handcuffed and dragged out of the classroom because of non-violent behavior. Lieberman said that the arrests "stigmatize and humiliate" children.

Beyond schools, the police have become involved in the lives of ordinary New Yorkers through the creation of the "Ring of Steel" or the Lower Manhattan Security Initiative as it is officially known. The initiative, launched in 2007, is a surveillance system made up of cameras designed to track vehicles, register license plates and keep tabs on suspicious behavior. The system is modeled after one used in London that lead to quick arrests following the subway bombings there.

This year, Bloomberg announced plans to expand the program to midtown from 30th to 60th streets, angering civil liberties activists.

"This is a massive infusion of surveillance program directed at us on the streets of Manhattan, and there are no privacy protections in place against abuse," said Lieberman. The Civil Liberties Union wants firm details about how much data will be collected on innocent people, how the city and federal governments plan to use the information collected, how long they can keep it, and how much federal money is being devoted to the project. The Civil Liberties Union has demanded that the City Council establish a review process to make the project more public.

"The City Council ought to be having hearings and the mayor ought to hear New Yorkers about it," said Lieberman. "New Yorkers are too sophisticated to just say yes."

"We cannot afford to be complacent," Bloomberg said announcing the expansion earlier this month. To reinforce that argument, Bloomberg and the police say that law enforcement has thwarted numerous terrorist plots against the city and note that the city has not been attacked since 9/11.

Police Commissioner Ray Kelly has said that surveillance systems are popular with the public. "Virtually every time it's polled, the public, over 80 percent approval rating on the part of the public for cameras in public places," said Kelly.

But Lieberman said police under Bloomberg have used the fight against terrorism to win support for questionable practices.

"Invoking the terrorist threat gives politicians a lot of leeway with the American people," she said, adding "We need more sunlight on the program itself. It seems like they are creating bigger haystacks to find needles."