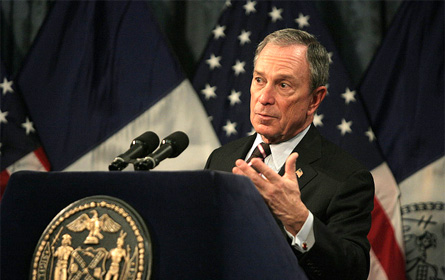 This time he means business.

Mayor Michael Bloomberg unveiled a $65.6 billion budget Thursday, the 10th of his tenure, which reduces spending by 0.4 percent and threatens for the third year in a row to lay off thousands of teachers. Bloomberg said the city was slammed by cuts from Albany and the federal government, leaving the administration with little choice but to cut back in classrooms. As a result, the administration proposed to reduce the teacher headcount by 6,166 -- 4,666 through layoffs.

"I don't see either Washington or Albany approaching fiscal realities the way we do in our city," said Bloomberg just before delivering his semi-annual budget presentation via PowerPoint. "Government's job is not to employ as many people as possible or spend as much of the taxpayers' money as possible."

With state and federal cuts, the city faces a $4.6 billion deficit. The mayor did say he sympathized with the state's dire fiscal straits, but asked for fairness from Albany.

The mayor's budget proposal does not offer many more spending slashes than the fiscal plan the mayor unveiled in November. Some of the more severe proposed cuts, including the closure of at least 100 senior centers, come from proposals in Gov. Andrew Cuomo's budget and from funding reductions in Washington, Bloomberg said. A federal cut could slash the number of day care slots for lower income families by more than 16,600, officials said, 16 percent of the total available.

According to the Office of Management and Budget, the mayor's preliminary proposal would reduce the city workforce by 8,300 positions -- more than 5,000 of them through layoffs.

The mayor has proposed massive layoffs before, but few have actually materialized -- none have occurred in the classroom. Advocates questioned what made this year any different.

“Given the city’s growing revenues, along with the governor's clear statement that the state budget should not require local layoffs, the mayor’s insistence on teacher layoffs becomes more and more bizarre," said Michael Mulgrew, the head of the teachers union, in an e-mailed statement.

As the mayor painted a gloomy fiscal portrait from City Hall's blue room, some on the sidelines, like Mulgrew, looked on with skepticism. After the mayor announced layoffs, he also said the city had received $2 billion in unexpected revenue, which would soften the blow from state and federal cuts.

"We are in a much stronger position than most," Bloomberg explained.

But officials in the Bloomberg administration and at the City Council, who will negotiate the fiscal year 2012 budget with the mayor over the next four months, said, whatever has happened in previous years, this time it is serious.

On top of that, the governor's budget proposal would affect $2.1 billion worth of city services.

The mayor's preliminary proposal assumes the city will be able to successfully negotiate in Albany for an additional $600 million. Some of that will come from an infusion of education and local aid funding, while part will come from rescinding part of uniformed workers' so-called "holiday bonuses." Reducing the $12,000 a year salary supplement would require the state legislature's approval.

Should the city fail to get this funding, Bloomberg said, the administration would have to go through another round of cuts. Since the recession, the administration has gone through nine rounds of slashes and cut a total of $5.2 billion in city services.

The administration, along with Council Speaker Christine Quinn, refuses to raise taxes.

All of this combined makes these cuts, particularly to teachers, more real this year, officials said.

"I think it's real based on the numbers," said Councilmember Robert Jackson, the chair of the council's Education Committee. "I don't blame him," he said of the mayor.

"He's right," said Citizens Budget Commission President Carol Kellermann. "The numbers are what they are. We've been using federal aid for education. We probably should have made some of these cuts sooner. Now we're kind of at a cliff."

Should the cuts to education occur, it's unclear how devastating they would be. The Bloomberg administration has been pushing Albany to repeal a state rule that requires the city to lay off teachers based on seniority. Getting rid of the restriction has been a key element of Bloomberg's agenda this year, and education officials say it is even more necessary since the city faces state education aid slashes.

"How it impacts the size of the classroom I don’t know for a fact," said Schools Chancellor Cathie Black at City Hall Thursday on the budget cut. "But it certainly has the possibility of raising class size."

Black said there are groups of teachers the administration would try to cut first, including teachers in a reserve pool who are awaiting a classroom assignment. Black said the education department would also look into laying off teachers who are deemed "unsatisfactory."

"I still think we will be dealing with teacher layoffs," Black said.

Cuts Beyond the Classroom

Outside of the schoolhouse wall, officials and advocates fear cuts that have reemerged from the mayor's fiscal plan in November.

Once again, the mayor has proposed to cut 20 fire companies. For the past two years, the City Council has come to the rescue of the Fire Department, restoring funds for companies the mayor plans to slash. This year, with so many teachers on the line, they may not be able to do that.

"It would impact our operations severely," said Fire Commissioner Salvatore Cassano of the proposed company closures. "Our response times would increase. I would be concerned if we had to do it."

In a prepared statement, Council Speaker Christine Quinn said she had "serious concerns" about teacher layoffs, the reduction of childcare slots and the fire company closures. The speaker also identified a $27 million state cut to senior centers as a council concern.

Department for the Aging Commissioner Lilliam Barrios-Paoli said that cut would close nearly half of the city's 256 senior centers.

"It's brutal," said the Barrios-Paoli. "To think [seniors] are going to walk 20 more blocks to go to another senior center, it's not going to happen. They are going to go hungry."

With state cuts, the city will also see a reduction in funding to its adult homeless shelters. The state also plans to eliminate rental support funding for former shelter residents.

The governor, mayor and the speaker of the City Council have said they would not raise taxes.

On Thursday some council members and advocates said the city should lobby Albany to extend the millionaire's tax, a personal income tax surcharge on the state's wealthiest, which is set to expire in December. Officials said that could bring in an additional $4 billion in Albany.

"At a minimum, we must continue the existing New York State [personal income tax] surcharge on high-income households," read a statement from the council's Progressive Caucus. "The surcharge is already in place, generating over $4 billion annually, with no evidence that it has driven wealthy New Yorkers to leave the state. In a time of crisis, it would be unconscionable to cut lifelines for our schools, our seniors, and our most vulnerable while waving bon voyage to billions of dollars in revenue that we are already collecting."

Earlier this year, Cuomo said he would let the tax surcharge die. Bloomberg has been extremely vocal against the millionaire's tax, contending it would result in affluent taxpayers fleeing the city.