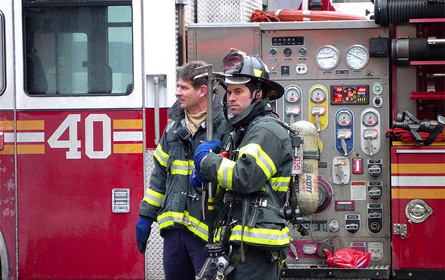 For the past three years, the Bloomberg administration has threatened to throw dozens of fire companies into the furnace. Faced with billion-dollar deficits, Mayor Michael Bloomberg has repeatedly attempted to hack away at the Fire Department's ranks for the sake of fiscal prudence and cost cutting.

Now that Bloomberg wants to reduce the number of companies for the seventh time in his tenure, insiders wonder whether his intention is to save cash or shrink the size of the department altogether.

"When [Bloomberg] first came in he said famously, 'Everyone had to do more with less well,'" said Martin Steadman, the research director for the Uniformed Fire Officers Association. "The Fire Department has had to do far more with far less."

Only six companies have actually closed since Bloomberg took the reins at City Hall in 2002. In his preliminary budget proposal released in February, Bloomberg threatened to add 20 more to that list. The mayor also recently reduced the number of firefighters from five to four on 60 of the city's nearly 200 engine companies -- otherwise known as the team of firefighters on one truck.

Union leaders are preparing to fight the closures and the staff reductions with all hands. But experts in the field think Bloomberg should take advantage of the city's fiscal woes. Bloomberg, they say, should examine the entire Fire Department, weed out waste and reorganize companies so firehouses are in neighborhoods where they are needed the most.

"Every time you have a problem, you talk about cutting a firehouse, it's not really good management," said Thomas Von Essen, the fire commissioner in the Giuliani administration. "I don’t think the Bloomberg administration has a clue of the inside workings of the Fire Department."

Representatives from fire officers and firefighters' unions will tell you they had their busiest year ever in 2010. The department responded to more than 507,430 incidents -- a record-breaker and a 7.3 percent increase over 2009.

When asked about staff reductions, union officials point to a five-alarm fire in Flatbush last month, which killed one person and injured dozens of firefighters. Just two weeks earlier, a staffing reduction on engines took effect (the mayor denies the fire had anything to do with the staff cuts).

"It's truly a game of Russian roulette," said Tom Butler, a spokesperson for the Uniformed Firefighters Association. "The purpose of government is to protect the citizenry. If it cant keep people safe, than what's the purpose of it?"

Unlike the Police Department, which has been held relatively harmless during the administration's nine rounds of budget cuts, the Fire Department has been repeatedly targeted.

Last year, Bloomberg threatened to shutter 20 companies at night. At the time, when asked if he thought the Fire Department was too large, the mayor said: "The way the Fire Department works is fundamentally if you want to cut back, you have to close companies. It's one of these things, you can never have too much, but I can tell you we can't afford much."

In an emailed statement, Marc LaVorgna, a Bloomberg spokesperson, denies the mayor's intention is to shrink the Fire Department.

"The reason for the proposed cuts at FDNY is because every agency in the city -- police, education, transportation and on down the list -- has to make reductions because we simply don’t have the resources, primarily because of the growth in costs like pensions, which are eating into the dollars we want to use to provide services to New Yorkers," LaVorgna said. "The Fire Department is no different and that is why reductions have been proposed."

Not since the 1970s has the department been under such heavy fire. Then the city shuttered 16 fire companies and lost approximately 2,000 firefighters.

So far the cuts in mass have never materialized. For the past three years in a row, the City Council has used its discretionary funding to stave off company closures.

That doesn't mean the same thing will happen this year. The city is facing closures at 105 senior centers and layoffs of thousands of teachers.

The fire commissioner, Salvatore Cassano, a lifelong firefighter who has held every position in the ranks, has expressed concern over the company closures.

"It would impact our operations severely," said Cassano last month of the proposed company closures. "Our response times would increase. I would be concerned if we had to do it."

The Fire Department is scheduled to testify at the City Council today on the mayor's latest budget proposal.

Incidents on the Rise

Even though the department had a record year in 2010, the type of calls it responds to has changed drastically over the years.

So while structural fires have decreased over the years, other emergency responses have gone up.

At the same time, the department has been able to shorten its response time. To all emergencies, except false alarms, the city's response time has fallen since Bloomberg took office. For structural fires, it is at a record low of 4 minutes and 1 second.

Given the changes in response, fire safety experts are encouraging the department to examine where its resources are needed most. Instead of shuttering fire companies, Glenn Corbett, an associate professor of fire science at John Jay School of Criminal Justice, has urged the city to look at response times neighborhood by neighborhood. Some neighborhoods, Corbett said, may not need a firehouse because the response time is low, while others might be in need of resources.

"Just starting off and saying we got to close 20, I don’t think anyone is ever going to argue it's going to have a positive impact," said Corbett. "You can't use the argument fire incidents are down and our response time is X. What kind of fires are we having? Perhaps the administration would like it to be simple, but it's not."

A department spokesperson said the FDNY monitors its resources constantly.

Bloomberg administration officials attribute increased cost in uniformed services to the rising cost of health care and pension benefits. Those services are taking a larger portion of the budget and forcing the city to reduce services.

At the same time, a discrimination lawsuit has prevented the city from hiring new firefighters. According to the department, they have lost about 500 positions.

Both the Uniformed Firefighters Association and the Uniformed Fire Officers Association are appealing the mayor's staff reductions to the city Board of Collective Bargaining -- an independent agency that oversees labor negotiations. The unions hope the board will grant them a hearing and eventually determine the staff reductions pose a safety hazard.

But budget slashing doesn't end there.

To stave off larger company closures, the city has proposed to charge motorists if they are involved in a vehicle accident and the Fire Department responds. The administration also wants to remove emergency call boxes from street corners. Advocates successfully challenged the call box move in court.

Officials at the City Council have spoken out against the politically unpopular measures.

"There is no area in the city of New York that wants to see their fire protection decrease -- not at a time when our Fire Department is responding to more emergencies than every before," said Councilmember Elizabeth Crowley, the chair of the council's Fire and Criminal Justice Committee, outside of City Hall Thursday.

Experts say the city has other options. In New Jersey, said Corbett, every business that hosts a certain population, like a hospital or day care, has to pay a hazard fee. Corbett said the program raised $20 million in New Jersey.

At the City Council, which has to approve a final budget, Crowley said they are not willing to sustain any cuts to the FDNY. She said the council will push the administration to weed out unnecessary overtime costs -- costs she said are double the $55 million the city would save closing companies.

When asked if the council could hold the Fire Department harmless, Crowley was confident it could.