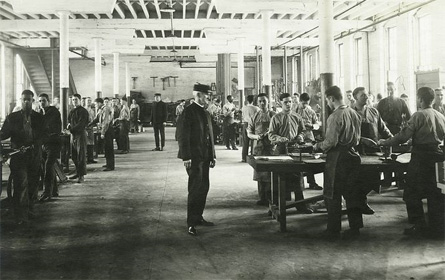 Every year New York City sends of its most troubled teens hundreds of miles away, Far from family, they are confined in institutions that by many accounts are brutal, ineffective -- and expensive. These institutions have been deemed so brutal and ineffective by the federal government that the Department of Justice threatened to take over the system if the state did not make drastic improvements to the quality of care.

Today, Assemblymember Karim Camara is expected to introduce a bill that would remove New York City kids from that system and give the city control over where it sends its juvenile offenders. The legislation, which was drafted in close concert with the office of Mayor Michael Bloomberg, would keep juvenile offenders from being sent to the upstate juvenile detention centers that have been the center of immense scrutiny because of their culture of violence and lack of proper mental health care.

The city's legislation has been hailed by advocates who work with juvenile offenders. They say the bill will keep offenders closer to home and would provide the young people with the specific type of treatment they need rather than using the state's "one type of detention fits all" system.

The bill also leaves questions -- does the city have enough service providers and alternative programs to take care of all its youthful offenders, and what will happen to the state's system if New York City is no longer part of it? The bill will face almost certain opposition from unions that represent staff at the upstate juvenile facilities who see their jobs as under siege.

As of January of this year the state's juvenile detention faculties held around 600 youthful offenders, 400 of them hailing from the five boroughs. Offenders aged 7 to 15 are housed in these detention centers -- 60 percent of them having committed minor offenses such as truancy or graffiti.

Reports have documented nightmarish scenarios within the detention centers where they are held -- cases of physical, mental and sexual abuse by staff. The prevalence of such abuse prompted the Justice Department's threat to take over the system.

Furthermore the facilities are hundreds of miles north of their homes in the city -- leaving the offenders far from the support of their families. And once released detainees seem ill prepared to reenter society.

In his state of the city speech in January, Bloomberg proposed allowing localities control over their youthful offenders and asked Gov. Andrew Cuomo to issue an executive order to make it so.

"The current system is not helping kids, it isn't helping taxpayers and is isn't helping public safety," Bloomberg said at the time. "The bottom line is, I think we all agree we need to stop sending kids miles away from their families and communities. And, instead, authorize the city to fully operate its own juvenile system here in the five boroughs."

Cuomo had other ideas. The governor and Gladys Carrion, commissioner of the Office of Children and Family Services", were already at work to reduce the size of the juvenile justice system around the state -- closing underutilized facilities, recommending that judges sentence low-risk offenders to alternative treatment and working to retrain staff to better care for offenders. The budget process, incorporating many of these changes had already begun.

In other words, Bloomberg's plan came at the wrong time. "I think people were already focused on the budget when this was introduced," said Marsha Weissman executive director of the Center for Community Alternatives who was also a member of Gov. David Paterson's Task Force on Transforming Juvenile Justice. "The work Gov. Cuomo and Commissioner Carrion are doing was good, and I think people thought, 'We've made so much positive progress,' that it was hard to deal with the next step."

Despite the early setback, Bloomberg's office continued working with legislators on the issue. "I don't think the governor has rejected the idea," said one Bloomberg administration figure early last week, "I just think he is busy." The administration remained "optimistic."

Camara's bill which is officially a "New York City Program Bill" will introduce Bloomberg's concept to the legislature.

The measure, titled the Juvenile Justice Realignment Act, would allow a placement agency"designated by the mayor of the city of New York to oversee the care, maintenance and supervision of adjudicated juvenile delinquents or juvenile offenders." It would operate and transfer youth to secure, medium security and non-secure facilities in the city. The agency would, "establish, operate and maintain treatment programs and other services for youth placed with or committed to the placement agency and programs for the care of conditionally released youth.”

The debate over the bill will start in the Democrat controlled Assembly. Calls to Assembly Speaker Sheldon Silver's office for comment were not returned.

Amy Paulin from Westchester, head of the Assembly committee on children and family, said she basically supports the legislation.

"If kids in trouble need treatment we should keep them home and near their family. We want to do this. The system is shrinking and it will continue to shrink but we need to make sure we have the right services in place," she said.

Paulin, however, is concerned that the city may not have enough services for all of its juvenile offenders. "There aren’t enough services in New York City right now," she said. "They use Westchester services because they are close, but there are a lot of things that need to be put in place before we pull the plug."

Camara said he is confident the city will be able to care for its population of troubled youth. "I believe we have enough existing services in New York City. We have some great nonprofits and alternative sentencing programs," he said.

Advocates say that the city already has a record of nurturing nationally recognized alternative-sentencing programs. These, they say, cost far less than paying for a youth to stay in a state run facility. According to Weissman, detaining a child in the state system costs over $200,000 a year while alternative programs cost $10,000 to $20,000 a year.

Weissman is perhaps most enthusiastic about how local control could aid in overseeing the quality of the programs. While the current situation places kids from the city hundreds of miles away from the community and people that care about their progress, the new system would keep kids near their families, under the watchful eye of local government. Weissman thinks this would make it much easier for parents to keep track of their children and hold local officials accountable.

Weissman sees a place for the state to monitor the quality of the city’s programs. Camara’s bill does not specifically call for that, but he said things could change as the legislation gains sponsors and makes its way through committees."I am open to it," said Camara. "We will be having lots of discussions about the bill going forward. I could see the state having a role overseeing the city system just as the federal government oversees the state's."

The Civil Service Employees Association"is already irate about the loss of jobs in upstate communities due to the shrinking of the juvenile justice system and planned prison closures. This Bloomberg administration's move will likely draw more outcry. Union heads have argued that communities could be put in danger by "non-secure" facilities in their neighborhoods. They say employees in the state facilities do dangerous work that keeps the state free from dangerous young offenders.

Whatever the merits of the union's arguments, the tide seems be turning aganst its members.

Cuomo made it clear in his budget speech earlier this year that he is concerned about the upstate economy but he will not keep people employed to watch empty prisons and detention centers. "If people need jobs, let’s get people jobs," he said. "Don’t put other people in prison to give some people jobs. Don’t put other people in juvenile justice facilities to give some people jobs. That’s not what this state is all about, and that has to end this session."

It is too early to judge what kind of support Camara's bill will receive. The office of Assembly Speaker Sheldon Silver, the office of Senate Majority Leader Dean Skelos and the governor's office did not respond to requests for comment. A spokesperson for the Office Of Child and Family Services said they would not comment until the bill has been introduced and they have had time to review it.

The fact that the bill only deals with New York City may drive off support from legislators who hail from outside the five boroughs.

Sen. Neil Breslin, who represents Albany, said that he supports the idea. "I would defer to the people from New York City," said Breslin. I think people from the city should be closer to their families." He added, "I don't think there will be a great outcry against it."

Weissman said she hopes there will be progress made this year. "I think the issue is still on the table for this year and if it doesn’t get passed this year I think we’ve done a good job laying the groundwork for future discussion."

Camara said that one thing is clear to him, "Regardless of the outcome of this bill we have to do something about those facilities. We have to change the juvenile justice system."