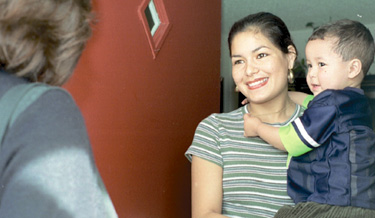 When Sheena Persaud became pregnant at 17, the Queens resident did not know much about taking care of a child. She did not have a high school diploma or many other resources.

Such difficult circumstances can often threaten the well being of both mother and child. But Persaud decided to try to improve her odds. She enrolled in the Nurse-Family Partnership, a free city program, and began getting weekly visits from visiting nurse Carol Coleman. Together, they discussed parenting techniques, healthy nutrition and communicating with infants.

"The program taught me what to expect when being a mom," Persaud said. "If I didn't join it I wouldn't know half of what I know when it comes to taking care of a baby."

Now a graduate of the program, Persaud has earned her GED high school equivalency certificate. She is working in a bakery and but hopes to train for a career in nursing. Her daughter Serena is two.

THE HIGH RISKS OF POVERTY

Children such as Serena face daunting challenges. More than half - 54 percent - of children of single mothers in New York City are poor. And, according to the Children's Defense Fund, poor children are more likely to die before their first birthday than more affluent children. Once they start school, they are twice as likely as to have to repeat a grade and three and half times as likely to drop out.

A lack of parenting skills can take a more immediate toll. New York City government recorded more than 65,000 reports of child abuse and neglect in 2006. In the first 11 months of that year, 40 of the children suspected of being abused died -- though not necessarily because of that abuse.

The Nurse Family Partnership takes a simple approach to such overwhelming problems. Under the program, a registered nurse visits a low-income, first time mother, starting during the woman's pregnancy and ending after the child turns 2. The goal is to help mothers have healthier pregnancies, to improve the child's health and development, and to assist the mothers in becoming more self-sufficient. During the visits, which take place every week or so, the mothers learn how to breastfeed, create a healthy environment for the child and plan their future pregnancies. The nurses also listen to the mothers' concerns.

The visitors "give young mothers the sort of cajoling and practical wisdom that in other times would have been delivered by grandmothers or elders," David Brooks wrote in a recent New York Times column.

"A first-time mom isn't sure of what's going to happen, you don't know what life is going to offer you and at least this is giving you a head start on it," visiting nurse Eulanda Greene, who works in Jamaica, Queens, said.

The program is the brainchild of psychologist David Olds. Working in a day-care center in Baltimore, Olds thought the care and he and his coworkers were providing there was "too little, too late" and that children would be better served if their parents received some assistance earlier. In 1977, Olds and some colleagues came up with the idea to have a registered nurse visit low-income, first-time mothers.

This concept, Katherine Boo wrote in a 2006 New Yorker article on the program, "is rooted in a pessimistic view of the future that awaits an American child born poor -- a sense that the schools, day-care centers, and other institutions available to him may do little to nurture his talents. Shrewder, then, to insulate him by an exercise of uncommon intrusion: building for him, inside his home, a better parent."

Pessimistic or not, it seems to work. A study conducted in Memphis, one of the first cities where the partnership was implemented, found children whose mothers were in the program spent 80 percent fewer days in the hospital for injuries or swallowing something hazardous than other similar children. Three studies of participants in the program found an array of other benefits. For example, both parent and child were far less likely to spend time in jail than they might have been had they not taken advantage of the program. The RAND Corporation has figured that every dollar invested in the program produces a return of $5.70, coming saving society about $34,148 per child.

"When it comes to improving the odds for poor mothers and infants, it's hard to beat the Nurse-Family Partnership," Mayor Michael Bloomberg said in this year's State of the city speech. "Through one-on-one nurturing and guidance, NFP helps first-time mothers build stronger futures for themselves and their children."

Over the years, the program has expanded and today serves about 20,000 families in 300 communities across the country. It was first introduced in New York City in 2003 with an office in Jamaica. A year later the Department of Health and Mental Hygiene expanded it expanded to Harlem. The program is aimed at the parts of the city with the highest infant mortality and teen pregnancy rates: South Bronx, East and Central Harlem, Central Brooklyn, and Jamaica East. It also tries to reach young mothers in foster care, homeless shelters and at Rikers Island.

Now, Bloomberg has pledged to expand the Nurse-Family Partnership by 50 percent in New York City by the end of the year. That would raise the budget to $3 million, enough to serve 1,300 families. Currently, the program can visit 845 families, but only 420 take advantage of this free resource. Many others simply do not know the program exists.

One other obstacle to the program's further expansion, according to a report in New York magazine, is the city's shortage of nurses.

Though the program costs about $5,500 per family a year, Lisa Landau, director of the Nurse-Family

Partnership for the health department, said it will reduces costs for New York City taxpayers in the long term. "There are savings in health care costs, child neglect costs, juvenile justice and there are also lower arrest rates for children and their parents," Landau said.

A 2004 report by the health department anticipated, based on previous evidence, that in New York City, the program would reduce child abuse and neglect among participants by 50 percent, and increase the amount of time that mothers in the program wait before having their second child, a change that cuts the risk of the premature births.

Having worked in the Jamaica, Queens office for almost four years, Greene said she has already seen the effects. The young mother, she said, make real progress.

"We teach them how to understand the baby's cues," Greene said. "They find out that it's normal for babies to cry and always put things in their mouth. I even have them observe other mothers on the streets and they realize so many of the mothers are not really paying attention to their children. A simple thing one client told me is that she saw a toddler walking with his mom and the mom was practically dragging the baby. She has to know he has short legs and he can't walk as fast as she can walk."

After graduating from the program, Persaud said she learned how to take care of her daughter, but she also learned something she wasn't expecting: how to take care of herself. "The nurse always motivated me to do something with myself," Persaud said. "She would push me to do things all the time. She even picked me up and took me to get a library card one day so I could study. Because of her I have everything. If it wasn't for her I wouldn't be so active, I would just stay at home and take care of the baby."