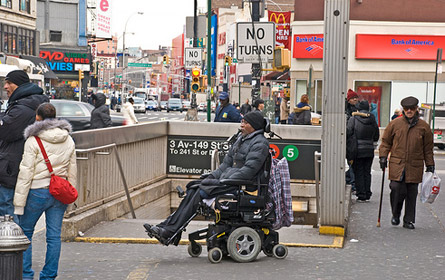 Photo (cc) PhillipC
Mayor Bloomberg has widened the criteria to define poverty in New York. Under the new calculations, the number of New Yorkers living in poverty increased from 18.9 to 23 percent over 2006.

Correction: This story, as it originally appeared, reported as fact poverty statistics that Bloomberg administration disputes. The story has been updated to reflect the debate.

U.S. Census data released in September revealed that more than 1.5 million New Yorkers lived in poverty in 2008, before the financial crisis hit its heights. The city reports that meant the number of its residents living below the poverty line had fallen by 168,454 since 2000. Some activists, using a different methodology, see the number of New Yorkers living in poverty as having increased by 126,458 between 2000 and 20008. In either case, that total is expected to rise sharply.

While social services were relatively low on Mayor Michael Bloomberg’s list of priorities during his first term, around the time of his 2005 re-election, he made it a point to reset that agenda. Bloomberg focused on two areas in particular: homelessness and an attempt to eradicate -- or at least reduce -- poverty in New York, a city that traditionally has offered a reasonably generous safety net in the face of emergency crisis.

Perhaps the most universally acclaimed element of Bloomberg’s effort has been the attention he has brought to the issue of poverty and his push to redefine who actually lives in poverty. The Center for Economic Opportunity, a special commission Bloomberg created with the singular purpose of fighting poverty, determined that the high cost of food and housing in the expensive city that is New York should be considered in calculating the threshold for being considered poor here. Using that new measure, the percent of New Yorkers living in poverty was recalculated and increased from 18.9 to 23 percent over 2006.

"Mayor Bloomberg proposed a more realistic measure of poverty that took some account of higher living costs in New York City. ... Bloomberg was right: The official poverty line in the United States is unreal. It does not take account of the actual costs of basic subsistence," wrote CUNY Graduate Professor Frances Fox Piven in an email. However, she added, "If we thought a new measure would mean more generous policies, we were wrong." Piven is an expert on social movements and welfare policy.

The mayor received so much recognition and acclaim for his efforts that at least 10 other U.S. cities are attempting to replicate his actions. The center also is working with the Obama administration to create a Federal Urban Innovation Fund, an "evidence-based" anti-poverty program modeled after the center itself.

The initiative featured about 40 different pilot programs. "Anything you do to make a difference is an important lesson," said Deputy Mayor Linda Gibbs, who lauded the mayor’s "willingness and bravery" to take on such a complex issue.

The specific projects include "conditional cash payments” called Opportunity NYC, which are contingent upon family members' actions. Other programs would provide a childcare tax credit -- which Gibbs described as "more budget secure" than city-funded childcare slots -- and job training. Together the efforts offer a "chance to re-examine [existing programs]. We know not all will be winners -- it's trial and error, but it also lays the groundwork," Gibbs said.

Gibbs strongly disagreed, pointing out city agencies are now working in tandem and every initiative is being tracked and evaluated closely.

For example, more New Yorkers now are eligible for -- and receive -- food stamps thanks to improvements in technology and office design, the Human Resources Administration reports. The office hours have been expanded and the application time has been reduced. People who receive federal Supplement Security Income now are automatically enrolled for food stamps. Applications, re-certifications and necessary documents can be submitted online or over the telephone in some cases.

In general, de Blasio said, he "never felt social services was one of the chief concerns" of the mayor and so Bloomberg never got as personally involved in poverty-related issues as in some other areas.

For example, de Blasio said, the mayor could have done something "tangible" to help the city's poor and working poor, by blocking the rent increases imposed by the Rent Guidelines Board, the body that decides rents for the city’s million stabilized apartments. He did not do that and in fact, has appointed the members who have raised those rents.

Andrew Brent, a spokesperson for the mayor’s office said in an email, "There is no question that any increase in rents is particularly difficult for people to handle right now. At the same time," he continued, "the costs to maintain and heat buildings have risen" and the board has "to find the right balance.”

Joel Berg, executive director of the NYC Coalition Against Hunger also criticized the initiative for its limited scope. "Only 3 percent of poor New Yorkers have been helped by the anti-poverty effort, and New York still leads the nation in income inequality," he said. The number aided by the mayor's effort is equal to about 42,000 people, according to Berg.

From July 2008 to July 2009, Berg said, 5,000 fewer people received public assistance while 276,000 more got food stamps. "The same offices that give food stamps turn people away from" welfare, he said. "This situations has "disproportionately affected minorites and defies logic. It just doesn't make sense."

"When it comes to poverty, when a mayor essentially says that we are only going to have small pilot projects that help less than [3 percent] of the target population, and, by the way, the overall poverty rate -- as well as the rate of homelessness and the rate of hunger -- will all be higher than when I started" and is then "hailed as an courageous innovator for even touching the problem, I don’t think such grandiose credit is deserved,” Berg said in 2008 testimony before the City Council.

Gibbs' office said Berg's 3 percent figure does not reflect the actual reach the Center for Economic Opportunity has had since it launched in 2006. More than 100,000 individuals participated in one of the center's initiatives in both fiscal years 2008 and 2009, according to the city. Some programs affect a larger number of people, Gibbs said, such as the new Office of Financial Empowerment, which educates poor people about "asset development [and saving] strategies."

A number of the initiatives already have proved successful, according to Gibbs. She cited the City University Accelerated Study in Associate Programs, which Gibbs said "structured more success in community college degree programs. ... We projected 50 percent [of participating students receiving degrees in less than three years] in three years, and 75 percent in four, and have already achieved 31 percent in two." That’s compared with 8 percent to 11 percent in a non-participating comparison group.

Then there’s the Teen Action plan, Gibbs noted, which funds a program for over 3,100 young people promoting "positive life skills, responsible citizenship ... with the goal of preventing teen pregnancy and school suspension." Only in New York, would people claim that helping 3,000 kids is insufficient, Gibbs observed.

The single biggest problem with the administration, said Berg, is its belief that a job -- any job -- is the answer, no matter what. "Bloomberg has been so-so on affordable housing but miserable on wages," he said. For Berg, this "work first" philosophy has discounted the severity of poverty and hunger in New York City.

Lower-skilled, lower-paid workers are simply following the career "trajectory of every worker," Gibbs explained. To think they can "jump over others is unrealistic."

Responded Berg, “They are not on a career ladder that will eventually lead to living wage jobs. If folks were truly on career ladders upward, of course they’d have to pay their original dues, like my grandparents did after coming to America. ... The reality that the [administration] never wants to admit is that lower income workers are on a treadmill that’s going backward. ... That is why the working poor are the fastest growing poverty population in NYC."

This is underscored by misleading information the city has disseminated about welfare-to-work recipients, Berg said.

The emphasis on jobs reflects what some see as Bloomberg's belief that the poor deserve some blame for their poverty. The administration's idea of paying people to improve their behavior -- by making sure their children go to school say, or go to the doctor -- reinforces that idea.

In Berg's view, the administration's efforts are based on the "incorrect belief that large government anti-poverty programs haven’t worked, far too based on the false assumption that poor personal behavior is the main cause of poverty, and far too detached from efforts to create jobs and raise wages."

CUNY’s Piven gives Bloomberg credit for not following "Guiliani in singling out the poor for gratuitously mean-spirited initiatives." But, she continued, "neither has it seriously revamped the policies that keep the poor poor. Moreover, it has presided over a real estate boom that has steadily encroached on the neighborhoods of poor and working class people, replacing affordable housing with glass towers of multi million-dollar condos."

Gibbs said the city is "developing new models." At the end of those efforts, she said, it hopes to have created a better safety net -- one that "lifts [people] out of that" to live independently.