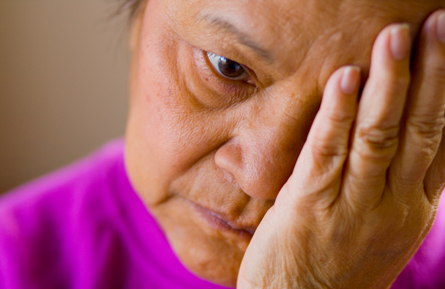 Nancy Smith, a 68-year-old Manhattan resident, was being abused emotionally and financially by her 23-year-old grandson, who she had raised.

In his teens, Andrew began drinking and using drugs, and stopped attending school. He would threaten his grandmother, saying, "I will break your heart open," and "I will destroy this house." He would vandalize her belongings and demand money to stop.

Jewish Association for Services for the Aged, received an order of protection. The Jewish Association for Services for the Aging also got her locks changed and secured a court order to have her grandson removed from the home. Staff helped Smith get involved in a support group. Today, she says she is at peace in her home and feels freer and safer than she has in years.

Nancy Smith is not alone.

According to the Jewish Association for Services for the Aged, its 715 elder abuse clients are just the tip of the iceberg. There are currently nine elder abuse programs in New York City that help approximately 1,200 persons each year. Initially funded under the Department for the Aging, these programs have been put on the chopping block for the last two budget cycles.

But in January and July of last year, the City Council restored $849,000 for all of the elder abuse programs in New York City. (The Jewish Association for Services for the Aged gets over $400,000 of that for its elder abuse programs serving Queens, Brooklyn and Manhattan.)

In his most recent budget proposal released in January, Mayor Michael Bloomberg proposed eliminating these programs entirely. The Council of Senior Centers and Services, which is leading the campaign against the cuts, and the Jewish Association for Services for the Aged are committed to not letting that happen.

A Portrait of Abuse

According to the National Center on Elder Abuse, between 1 million and 2 million Americans 65 or older have been mistreated. Only one in 14 cases of elder abuse in domestic settings is reported, and only one in 25 cases of financial exploitation is reported. Elder abuse victims tend to be female, socially isolated, dependent on a caregiver, physically frail, and experiencing other family stressors. The abuser is most frequently a family member, perhaps a spouse or an adult child. He or she also may be a neighbor, friend or paid caregiver. Abusers tend to be unemployed, suffering from mental illness and/or chemical addiction, middle aged, dependent on the older adult, socially isolated and experiencing their own financial and/or legal problems.

The current economic climate will cause deep and painful funding cuts to key publicly funded services across the board. However, in contrast to other New York City programs, elder abuse programs are slated for elimination -- not just a budget cut. Eliminating even the existing bare bones level of funding for these programs will have a catastrophic impact on elder abuse victims. No other programs assist New York City's older adults with this specific targeted service and with the necessary professional expertise they need.

Elder abuse, if not addressed, may threaten the victim's life. It can induce poverty and so deprive them of needed care. This can lead to an even greater strain on public resources whether the victim remains in the community or is institutionalized.

Eliminating elder abuse services will place a greater burden on other public services, such as the police, hospitals and senior social services. Although adult protective services are available, not all elder abuse clients meet the eligibility criteria -- which include mental and/or physical disability. In fact, perhaps only 20 percent of the our current elder abuse services caseload would be eligible for these services.

In 2006, the New York City Elder Abuse Network was established. The 50-member coalition creates links and addresses service gaps among police, prosecutors, providers of direct elder abuse services, providers of supportive services and government agencies, medical providers, advocates and academic institutions. If the elder abuse funds are eliminated, this network will be difficult -- if not impossible -- to maintain.

What will happen to the 80 percent who are not eligible? Who will they turn to? Where will they get help? Will they call the police? As the majority of elder abuse is perpetrated by family members, many older adults do not want to involve the criminal justice system. If there are no elder abuse programs, where would the police refer them?

In New York City, the over 65 population is projected to increase by 45 percent by 2030 -- more than three times the increase of younger New Yorkers. Elder abuse will grow, especially in bad fiscal times when people are out of work and financially stressed. These programs conduct extensive outreach. Since the onset of the economic crisis, there has been an increase of almost 30 percent in the number of incoming elder abuse cases.

Will New York City let thousands of elder abuse victims down? There is no excuse to cut elder abuse programs -- ever.

Bobbie Sackman is director of public policy for the Council of Senior Centers and Services. Mara Schecter is Queens district director and director of Elder Abuse Programs for the Jewish Association for Services for the Aged.