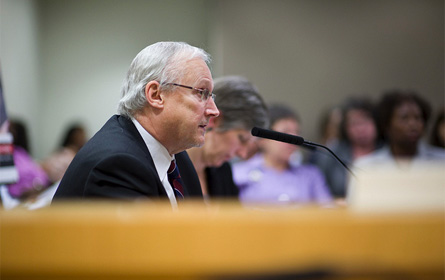 Photo by New York City Council
Administration for Children's Services Commissioner John Mattingly has defended cuts to the agency in the face of questions from skeptical City Council members.

Administration for Children's Services Commissioner John Mattingly pledges to keep children safe, even after his agency lost approximately $250 million in funding and must deal with a 30 percent increase in allegations of child abuse and neglect.

The City Council fears Mattingly may not be able to keep that promise.

Mayor Michael Bloomberg's latest budget proposal, released in November, plans to cut ACS by another $24.5 million in fiscal year 2011 and $36.9 million in fiscal year 2012, which begins in July. This budget slashing and accompanying staff cuts -- which could hit more than 550 employees -- represent a change in direction for the agency, which saw its budget grow after the 2006 death of 7-year-old Nixzmary Brown.

Council Speaker Christine Quinn has made restoring the ACS funds a top priority.

"We will simply not stand by and allow cuts to go through that could put children's lives at risk," she said.

As recently as July, the council restored funding to stave off layoffs at the agency.

Since 2008, when the agency's overall staff and budget hit a high water mark at 7,081 and $2.85 billion, respectively, the organization has faced steep budgetary slashes. The proposals for this coming fiscal year show nearly 1,000 fewer employees and a $2.6 billion budget. These decreases come in the face of an increase in reported cases of abuse and/or neglect each year -- up nearly 15,000 in fiscal year 2010 from fiscal year 2005 -- and growth in the number of children receiving contracted preventive services -- up roughly 1,000 in the same span. While the amount of children receiving overall care has risen, the number of youth in foster care has dropped every year since 2007.

"I think [ACS has] done a lot of work to improve their ability to do quality investigations and keep the children safe," said Stephanie Gendell, associate executive director of policy and public affairs for the Citizens' Committee for Children of New York, a child advocacy group. "The question is more about whether or not the cuts are going too deep and whether they hinder their ability to do the plans that they have."

ACS plans to meet the most recent budget cuts by raising revenue, saving money and restructuring its services. While council members have expressed concern over some of these strategies, it is the reorganization of the supervision structure and elimination of support staff that has attracted the most attention, with some council members arguing that these moves put ACS in danger of sliding back to 2006.

Under the current set up, ACS managers each oversee three units with two unit supervisors -- a level one and a level two -- and five caseworkers who handle eight to 10 cases each. After the cuts, every manager would oversee four units, and the level-one supervisors in the units would be eliminated.

This, Mattingly told the council, would keep the current caseload of eight to 10 cases per worker and would not touch front-line staff.

"We have found that efficiencies can be made among support staff that will help us to avoid impacting staff working directly with children and families," Mattingly said at the hearing, discussing the staff cuts, which in total will eliminate 118 administrative and support staff.

In 2006, ACS came under public scrutiny when details emerged regarding the murder of Nixzmary Brown by her stepfather. Despite reports of consistent abuse throughout her childhood and two formal complaints registered with ACS, the city never took action to remove Nixzmary from her home.

The death and ensuing trials, which put both Brown's stepfather and mother behind bars for manslaughter, were widely reported in the media. The girl's death sparked the approval of Nixzmary's Law, which enables authorities to charge a parent under suspicion of murdering his or her child with first-degree murder. It also led to changes within ACS. The agency hired more caseworkers, reduced caseloads, and increased supervision and training.

"ACS has made a lot of positive changes in terms of the training for their staff and the managers for their staff," Gendell said, echoing the sentiments of other experts.

Mattingly has denied that the current budget cuts would erase those gains. At the City Council hearing, he reported that the current per worker caseload stood between eight and 10, well below the goal of 12, and promised it would remain at that level.

Mattingly also pointed to "enhanced accountability in our child protective offices, increased supervision and support for staff in these offices," as positive changes since 2006.

ACS maintains the cuts will not affect that. "The structural changes put in place in 2006 have not been changed, including worker access to the 50 to 60 retired detectives hired as investigative consultants," Elysia Murphy, deputy communications director, wrote in an email.

But some argue that ACS is allowing workloads to increase while training, support and supervision decreases. Some council members and advocates question why the city targets ACS for cuts that are larger than other "first-responder" services, such as the police and fire departments. The Citizens Committee for Children maintains that ACS is the city's "first responder" for New York City's children.

"As an agency, they have been very reactive to public embarrassments and tragedies," Fidler said. "Then when memory fades and the [budget cuts] come, they try to make their target by retreating from some of the progress they've made. That's very unfortunate."

ACS is facing more proposed layoffs from January to March than any city department save cultural affairs. Seventy of those jobs are unionized.

Both the union representing workers at the agency, Social Service Employees Union Local 371, and the City Council have been pointed in their criticism of those cuts. The union charges ACS with favoring the elimination of front-line unionized employees instead of reducing its contracts with private service providers. City Council members take ACS to task for not seeking alternate means to save money, such as renegotiating contracts with those providers.

"Since 2007, every time the administration has asked the commissioner to make cuts, ACS goes directly to their front-line workers," said Faye Moore, the president of SSEU Local 371. "Other agencies have managed to make these cuts and meet the mayor's targets without laying off unionized staff. ACS has a different view of the world, and they find it more prudent for their vision to lay off workers than to do anything else."

Thirty-seven of the positions on the chopping block -- unionized child welfare specialists -- were funded for 12 months last spring by the City Council.

"How are you cutting positions of people that we are putting the money up for?" asked City Council Finance Committee Chairman Domenic Recchia at this month's budget hearing. Mattingly responded that the 37 workers were not front-line workers in child protective services.

"I don't see why you can't train these already hired individuals so they could be moved up to protective services and there would not be anyone laid off," Recchia responded.

With an ACS hiring freeze in effect, though, six trainers -- unionized as well -- will also be eliminated. Moore emphasized that this staff would be needed to provide necessary ongoing training even if there are fewer new employees.

In her email, the ACS spokesperson Murphy said the agency closely monitors workloads, including work for the Family Services Unit, and "is committed to ensuring that workloads for all child protective staff remain sufficiently low to ensure the safety of children."

ACS has said it must make the staff cuts because revenue increases and cost savings already put in place "were not enough to meet our budget targets for the November plan."

Fidler, for one, thinks other options exist. He believes a renegotiation of ACS's contracts with landlords at its daycare facilities could cover much of the budget cut. According to Fidler, ACS has rebuffed this idea by arguing that it would involve an inordinate amount of legal work. ACS did not offer any comment on the proposal.

Then there are all of its private contracts. Mattingly has publicly stated that he believes private nonprofits are better suited to provide certain child-care functions than a government agency. Moore sharply disagrees.

"There are certain things that the private sector cannot deliver," she said, adding that she has not seen evidence to support Mattingly's claim. On the other hand, she said, public employees "can access another agency to help a family."

Fidler thinks rather than cutting back on contracts, ACS would like to have more of them. "I don't think they want to be in this business," Fidler said. "I think frankly the political wheel of the [City] Council is the only thing that has stopped then from making progress in that regard."

In its emailed response, ACS said it has always contracted with non-profit agencies and that "there has been no change in that regard." Such efforts, it said, are designed not to save money but improve services. "We have eliminated unnecessary delays in decision making by delegating the day-to-day responsibilities to services providers working directly with children and families," Murphy wrote.

Soon ACS will meet with the union to discuss the layoffs and structure change, although no definite plans have been set. Meanwhile, the City Council will dig for any way to shift money around as it did in June, when the Council spared 82 of 109 anticipated layoffs for ACS.

"My colleagues and [Quinn] have always been very strong on this issue," Fidler said. "I think that if we get a pound of flesh out of this [budget] negotiation, I'm reasonably confident that at least a couple ounces of it will be going toward these ACS cuts."

Making the process more difficult, however, is the inability of the City Council to add money to the budget. This, along with the city's fiscal straits, will make the reductions difficult to fight.