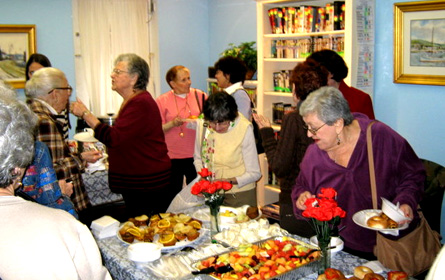 Jing Luo, 78, has been visiting the BRC Senior Center in Chinatown for 13 years. Originally she went to remain active while she was caring for her ailing husband. Now, despite having arthritis in her feet, she still braves the 30-minute walk from her home -- regardless of the weather.

Luo credits the center with helping improve her quality of life. "After I came here, I felt happier, not as depressed. My nutrition has improved, and I feel happier," she said.

Luo describes the center as "her second home," but soon she and thousands of others may have to find another senior center to go because of the state’s financial problem.

Earlier this month, the city released a list of 105 senior centers across the city, including the BRC Senior Center, it says it will have to close because of cuts in state funding. If implemented, the cuts will affect between 8,000 and 10,000 city residents.

The legislature appears to be trying to keep the centers open. The state Senate and Assembly have agreed to fully restore the so-called "Title XX" state funds the city uses to run the senior centers in their budget bills. They could be voted on as early as this week, according to Bobbie Sackman, director of public policy at the Council of Senior Centers and Services. The money would then be part of the budget negotiations between the legislature and Gov. Andrew Cuomo, the New York Statewide Senior Action Council has written. One possible sticking point: The Assembly reportedly calls for financing programs by extending a tax surcharge on the richest New Yorkers -- a tax Cuomo has repeatedly opposed.

The city, elderly New Yorkers and advocates for senior have been pressing for the funding for weeks.

The loss of state funding "would profoundly affect senior centers across New York City," said Christopher Miller, director of public affairs for the Department for the Aging. "We are working hard to have this action reversed, but unless the state dollars are restored, DFTA will be forced to close up to 105 of its 256 senior centers."

Without the Title XX funding, the budget for all centers in a given City Council district would be cut by 30 percent. In deciding which centers to put on the chopping block, Miller said the department looked at each community district with multiple senior centers and has proposed shutting the centers whose closure would have the least impact on seniors. BRC is on that list of centers.

A day before the list of closing senior centers came out, new projections estimated the state would have an additional $155 million to spend in the next fiscal year. Several public officials have urged Cuomo to direct some of that money to the senior centers.

"It's my hope that both the city and the state budget reflects increased revenue projections,” said Councilmember Stephen Levinof Brooklyn, who is among those trying to get a portion of an $155 million to go to senior centers

"That's money that could be used to help make up this difference. All I'm focused on is getting the money restored and not having to close any center anywhere," Lappin said. While her district will only lose one of its three senior centers that one -- the Lenox Hill Senior Center -- is the only senior center in the city that is open seven days a week.

In the long-term, Lappin and advocates say, funds spent on senior centers save the city money.

Ninety percent of those who visit senior centers around the city live below the poverty line, according to Lappin. "There is no question that if people are not able to access services to keep them in their own homes, it will cost the city more," she said.

For the people who use these centers, "it's a matter of life and death," Lappin said. "A society is judged by how we treat our seniors, and these are people who need our help the most."

Sackman, agrees. Cutting the centers, she said, is "not good budget policy." Without the centers, Sackman said, "you have enough people that go into the hospital and use more home aid. Since your priority is saving healthcare and Medicaid dollars, this is a 360-degree wrong direction to go in."

According to Sackman, the average annual senior center budget is $350,000 a year, while it costs an average of $123,000 a year for someone to stay in a nursing home.

"The important thing to realize is that senior centers are not social clubs. They are places that enable people to stay healthy in body and mind in their old age so they can remain independent, so they won't be a burden to others,” said Muzzy Rosenblatt, executive director of the Bowery Residents' Committee, which runs Luo's center.

That center sees over 120 people a day, mostly residents of Chinatown, and offers an array of programs including gardening, nutrition, English instruction and case management assistance. According to Rosenblatt, 95 percent of seniors who attend the Delancey Street BRC center live below poverty line, and a significant amount are on a fixed income.

"There's no cost benefit analysis that makes sense for closing these programs. The impact on their health and wellness will be immediate and the cost will be extraordinary," said Rosenblatt. "It's not just the seniors that are going to be affected by this. There are hundreds of jobs in these centers. When we talk about half of the senior centers closing in the city, that's hundreds that are out of work."

Ray Guo, 68, a retired activity aid who has attended the center for four years, worries about the employees. "Everyone is very sad, the workers help us a lot. If they close the center it will be a catastrophe," he said.

Seniors in other neighborhoods express similar devotion to their centers. At the Stein Senior Center in midtown Manhattan, executive director Jane Barry said "A lot of people consider this a second home. One member calls it the Stein Center for Humanity."

The Stein Center serves lunch for up to 120 people. Barry said some of the residents only eat half of the food at the center and take the rest home with them. The center also offers language and computer classes, and programs for people with early stage Alzheimer's disease.

"I think its a travesty that they're planning to close 100 senior centers during the recession. The people who come here are tax payers who are having their services being taken away," said Toni Matich, a retired HIV/AIDS administrator for the city health who now goes to the Stein Center.

In the past, the city administration has called for cuts to centers and other senior programs, only to see the City Council restore some of those reductions. That, though, may be harder to do this year, with the city facing its own budget deficit as well as sharp cuts in state funding. In Albany Cuomo has vowed to balance the budget without increasing taxes, sparking cuts to a number of popular programs, including education and senior services.

Many clients, though, say they will try to avert the cuts. Agathe Wulkan, a Stein Center attendee and retired administrative secretary, has begun lobbying her elected officials to reconsider the cuts. "I already wrote two letters, and I'm going to make several calls," said Wulkan. "It sounds horrible. I would be devastated if they close the center."

Peter Lambert, 74, isn’t too concerned about himself if the BRC center closes, but says that to some of his fellow seniors it would be "devastating.”" The government, he said, should "stop finding ways to take away care of people who help make this city what it is.”

Ralph Rizzuto, 64, a retired IBM employee rejected the notion that some program must be cut. "All social programs are important -- seniors, education, etc.," he said. "Instead of making all of these cuts, we should be moving money from the rich and taxing them,"

Cutting the centers, Sackman, said, "will say to seniors that you are not worth the investment to stay active in your community."

Luo put it this way as she envisions a life without her senior center, "Our lives will be short. We'll need more doctors, more medication, our health will be worse because we have no place to go."