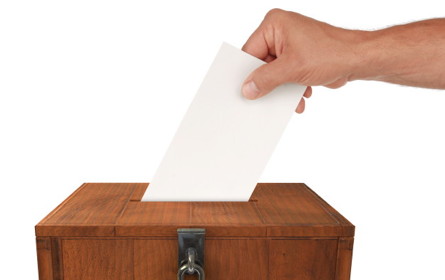 ALBANY, N.Y. â€“ State lawmakers are considering an overhaul of voter registration and a redesign of ballots to include only two languages other than English as officials look to modernize and streamline elections ahead of state and national races.

A number of the laws being proposed in the state Legislature could be long-shots with only two weeks left in the legislative session, while others may be days away from being passed.

Ballots are likely to be redesigned to contain only two languages other than English and feature bigger type, clearer presentation of candidate’s names and better distinction of where voters should notate their choice of candidate.

"Clearly the biggest complaint about the voting process since the introduction of optical scan ballots has been about the difficulty of reading the ballot,” said Neal Rosenstein of the New York Public Interest Research Group. “The problem is the font size, poor design, unwieldy instructions and unnecessary clutter. We hope this will address the font size. We think this is great news for what will be an extraordinarily complex and crammed ballot full of different offices and candidates.”

The legislation, which is expected to pass by the end of the session, is being negotiated by the Cuomo administration and both legislative majorities.

State Assemblyman Brian Kavanagh is sponsoring several measures that would massively remake voter registration in the state. Last week, Kavanagh and Sen. Mike Gianaris, both Democrats introduced The Voter Empowerment Act â€“ a bill full of changes to the voting registration process that is so comprehensive that it seems unlikely to move this session, if at all.

The Voter Empowerment Act would automatically register consenting adults, allow preregistration of teens aged 16 and 17, and update voter registration when people interact with certain government agencies and when they move. Currently, citizens most obtain forms and mail them in to register or register in person. The new legislation would allow online registration and make changes to addresses and party affiliation easier. Right now, voters who change their parties before an election are not officially registered in the party until the Tuesday following the election.

A recent George Mason University study found that New York ranks at the bottom of a list of states in voter turnout with only 35 percent choosing to cast ballots in the 2010 election. A recent report from the Center for American Progress showed that New York has over 500,000 eligible but unregistered Latino voters, and a million more who will be eligible when they naturalize.

Gianaris said the current system puts the burden on the citizen to register. “We have a 19th century system in 21st century world," he said.

Rosenstein agrees. He said a number of states including California, Arizona and Pennsylvania have online registration. “New York is clawing its way out of the industrial age on voter registration," he said. "Other states have shown that auto registration increases registration and makes the process more efficient.”

Rosenstein said most Western Democracies don’t have voter registration. They simply have checks to prevent fraud at the polls. “There is no reason in this day and age to preserve this archaic system,” he said.

Gianaris’ support of the bill has some Republican Senators opposed to it on principal, since Gianaris is the head of the Democratic Senate Campaign Committee.

Scott Reif, a spokesman for the Senate Majority, declined to comment on the bill except to say it wasn’t “a priority.”

But Gianaris does not see the issue as partisan.

“Really the problem is incumbents vs. challengers. The battle lines are not partisan when it comes to reform," he said. "I think you will find a number of incumbent Democrats who are against changing the way people are elected. In a progressive state like New York we should not be third from the bottom in voter participation.”

Kavanagh said incumbents "have issues with this because they were elected under the current rules."

"Incumbents hear from voters all the time about how hard it is to register, to stay on the roles and to vote," he continued. But he said he planned to make sure the issue was nonpartisan.

“We are going to reach across the aisle. It's not like we are forcing everyone to register. There would be a box to check to opt out. But I think most officials think that if everyone was registered that their party would win because their ideas are better," he said.

Another bill being sponsored by Kavanagh would change how votes are tallied and reported on election night before the vote is certified. Currently, the process involves time-consuming hand counts of votes by election district.

The New York City Council passed a resolution yesterday in support of the bill, which would have a major impact on elections in the city of 8 million people.

"The procedure for reporting unofficial election night results, with all its delay and inaccuracy, is undermining everyone's confidence in our ability to run fair, efficient elections," Kavanagh said in a statement read to the Council’s committee on governmental operations, which considered the resolution earlier this week.

Art Chang, chair of the New York City Campaign Finance Board's voter assistance advisory committee, explained that all the old steps are unnecessary with the use of electronic voting machines.

The bill would allow the city Board of Elections to report results more quickly, with a portable memory device holding ballot scanner data replacing cut-and-pasted paper tapes. This practice has already been applied successfully in some New York counties, including Nassau County, according to Kavanagh. However, the Board of Elections in the City of New York has yet to give their support for this resolution.

Gale Brewer, chair of the Committee on Governmental Operations, said she expected a response from them by Tuesday.

Adrienne Kivelson, who represented the League of Women Voters as a witness at the hearing, explained that her organization also could not directly support Kavanagh's bill.

"As much as we recognize the urgency to address this issueâ€¦ we find nothing in the bill that's going to speed up the process for poll workers who've already put in a 15-hour day," she said.

Kivelson emphasized the bill's flexibility as a weak point, saying that her organization wanted a more forceful change in canvassing methodology.

"The bill is very permissive and 'may' is used very often in the bill," Kivelson said. "That doesn't give us great confidence in the procedure changing."

She added: "We view 'may' rather than 'shall' in the language of the bill as unacceptable."

However, the consensus among all who spoke was that some sort of change should happen as soon as possible, considering upcoming local and national elections in the city.

Brewer said she had personal experience with the complexity of the process. "There's no question that we're all trying to achieve the same goal, which is to have a streamlined but always accurate, always secure process," she said.

With the state Legislature’s session coming to a close on June 21 and legislators focused on their own election battles, much of Kavanagh’s legislation could be left undone.

Both Gianaris and Kavanagh acknowledged that a result was not imminent, but that they wanted to start a conversation.

And then, of course, in true Albany fashion, both legislators say they expect to be called back to session â€“ perhaps after the November elections to address outstanding issues and legislative deals.

“It is too late in the year to make changes for this election season,” Gianaris said of the voter registration reform legislation. "I expect we will back and we plan to talk about this legislation next year but we have taken the first big step.”