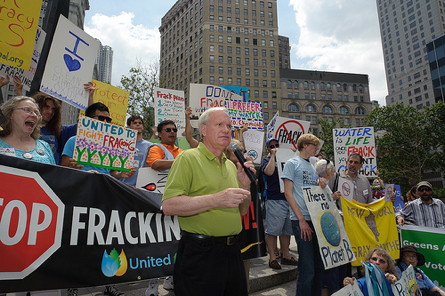 State. Sen. Tony Avella at an anti-fracking rally in June 2011. Photo by Adrian Kinloch, used under a Creative Commons license.

NEW YORK â€“ State Sen. Tony Avella has called on Gov. Andrew Cuomo to meet with legislators, public health researchers and the director of the Oscar-nominated documentary “Gasland” to discuss the negative impacts of hydraulic fracturing.

"The gas and oil industry has already been readily engaged in the process of review and information sharing," he said in a letter sent to the governor yesterday. "It is now time to expand that review â€¦ to include numerous medical professionals, scientists and environmentalist[s] who have repeatedly stated their willingness to engage."

At a forum on Wednesday, Avella said he thought the governor and the state’s environmental regulatory agency are "moving rather quickly” on a decision to allow the controversial form of natural gas drilling - also known as fracking â€“ in New York.

Avella’s challenge to Cuomo came during Wednesday’s hearing held by Democrats on the state’s environmental conservation committee in Manhattan, where dozens of opponents of fracking gathered to voice their concerns. They heard testimony from public health researchers, economists and natural gas experts.

The plan proposed by Cuomo and detailed in a Department of Environmental Conservation environmental impact statement would allow natural gas companies to drill within five southwest counties in upstate New York at the deepest core of the Marcellus shale rock formations.

In hydraulic fracturing sand, chemicals and water are injected to extract natural gas. The process has raised concerns over contamination of groundwater and the city’s watershed.

At the forum yesterday, Elaine Hill, a doctoral student from Cornell University studying the effects of unconventional natural gas development in Pennsylvania, Colorado and Texas claimed newborn babies within a close proximity to fracking wells could be subject to a significant decrease in birthweight.

Many anti-fracking environmental advocates and public health researchers present at the forum called for the DEC to accept an independent health and seismological assessment of the drilling process, saying the studies should be both peer-reviewed and separate from the natural gas company-funded studies.

Pepacton Institute economist Jannette M. Barth noted the ad-valorem tax, which measures gas value over time, may not start until 5 years of drilling â€“ while surrounding communities incur immediate costs of production without any source of revenue.

She said this will be “a boom and bust cycle” of short-term, out of state workers.

“They may work for two weeks at a time, while sending wages to home states helping those economies, but jobs are gone once the rig moves to another state,” Barth said

Attorney Elisabeth Radow noted that Nationwide Mutual Insurance Co., will not renew insurance on homes leased to fracking. She said with contamination of water and air quality “mortgages and home values would plummet.”

Chris Northrop, an oil and gas investor in Texas and New Mexico for 30 years, testified against the DEC being able to issue permits to natural gas companies and manage environmental requirements.

“There should be an autonomous environmental oversight,” he said.

In the forum Avella said this is a “conflict of interest” after Senate Democrats accused the DEC of sharing information with drilling companies months before the public got to see the process.

In a NY1 report, the governor was asked to comment on the issue at a public event in upstate Utica.

In January, Avella along with two other state senators, introduced legislation to regulate fracking. One measure called for banning fracking in New York, while another called for treating contaminated water under hazardous waste regulations if fracking were to be permitted.

She said wells had already been successfully fractured. The governor’s plan would allow workers to “drill laterally into tight porous shale formations” that were previously “not accessible for the past ten or twelve years,” she said.

She defended the natural gas industry as being “established for 60 years” in the U.S. and having an “absolute stellar record” with “no dangerous groundwater contamination.”

Messore also said the technology practiced is proven and safe. Commenting on lateral hydraulic drilling, she said: “In other parts of the U.S., this is a standard practice.”

James Smith, another spokesman for the IOGANY, said Wednesday’s forum was “more of a rally than an educational session.” He did not attend.

Josh Fox, the director of “Gasland,” presented an emergency short film “The Sky is Pink” during the forum. He said that “over a thirty-year period half of all gas wells will fail” due to cement well case leakages, according to a study titled “Why Gas Wells Leak?” done by Schlumberger, the world’s largest oil services company.

But Smith said cement case leaks “happens naturally” and are not caused by drilling. He said that, in New York, seven layers of cement and steel well casings are made to protect fluid in the well pipes.

But he acknowledged that “the process isn’t foolproof” but added that there was a payoff for landowners who agree to drilling. He said they “will have wealth they never had before to keep their farms going.”