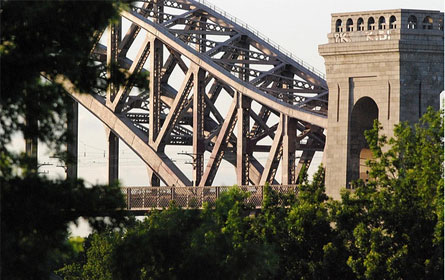 Photo by Actor212
The two candidates seeking to represent Astoria in the State Assembly disagree over what the district needs and who can better serve it.

UPDATE: More than a week after this story was posted, John Ciafone was knocked off the Democratic primary ballot, leaving Arvella Simotas unopposed. Ciafone told Queens newspapers he was still considering running against Simotas as a Republican in the general election

After 10 years, Michael Gianaris is leaving the State Assembly to make a bid for the State Senate. Only two candidates, though, have decided to seek the job -- despite the rarity of open Assembly seats in New York.

At first the race to represent the 36th Assembly District, which is anchored in Astoria, had the potential to be highly contentious. There were three candidates, no incumbent and the threat of low voter turnout, which could slim the victory margin.

Then last month, after the filing deadline to get on the ballot, one of the leading contenders, child advocacy lawyer Jeremiah Frei-Pearson, dropped out, telling supporters he did not want to run a negative campaign against fellow Democrat Aravella Simotas.

"It was becoming very clear that it wasn't going to be a three-way race. In order for [Frei-Pearson] to win, he would have to go all-out negative" against Simotas, spokesman Mike Murphy said. (Simotas' spokesman also is named Mike Murphy.)

Because Frei-Pearson and Simotas have similar stands on the issues, Frei-Pearson did not want to take votes from her that might allow for the third and more conservative candidate, John Ciafone, to win, Murphy said.

Michael Reich, the executive secretary for the Queens Democratic Party, said although the group endorsed Simotas, they were impressed with Frei-Pearson's campaign.

"We have been talking to him all along. He wanted to demonstrate to us his ability to put together a campaign," Reich said. "We look forward to working with him in the future."

Reich added no deal was made with Frei-Pearson in exchange for his withdrawal.

Now, with Frei-Pearson out of contention, Simotas is off to fight round one, of what will likely be two, with Ciafone.

Although both remaining candidates agree that corruption in Albany is stifling efforts to resolve issues facing the 36th Assembly District, each has a different idea of what the district's pressing problems are.

Simotas, a 31-year-old litigator, has been living in Astoria since her family emigrated from Greece when she was six months old. She said she grew up working in her parents' deli, attended local public schools and continued to live in Astoria while earning her bachelor's and law degrees at Fordham University.

Simotas said because of her personal history and many years in Astoria, she knows what the community needs. And, she added, it needs hospitals.

With three hospital closures in Queens in recent years, the area is having a "health care crisis," Simotas said. "Ensuring that we have expanded access to health care services is something I really want to fight for."

In addition, she said, citing her parents' difficulty in getting coverage when they ran their deli, she would look into providing health insurance options for small business owners.

Also an attorney, Ciafone runs his own general practice in Astoria. He was born and raised in Queens and attended New York University and St. John's School of Law. Ciafone said from his real estate cases and speaking to neighbors, what local residents are most frustrated with is the rising cost of living.

Astoria in particular and Queens in general, have been attracting new residents over the years, specifically young professionals and immigrants, because of its relatively low housing costs.

But Ciafone said increasing rents and the shutting down of the W train earlier this summer could reverse that trend.

Additionally, Ciafone often points out that a major difference between him and Simotas are their positions on same-sex marriage, which she supports and he opposes. 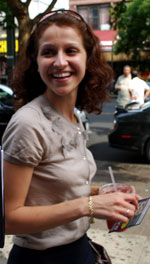 Aravella Simotas is a lifelong Astoria resident who has been endorsed by the Queens Democratic Party.

Gays and lesbians "have a right to civil union and civil rights," he said. "I'm a Catholic, and my position is based on Catholicism and it's based on essentially every religious group -- like Muslim or Hindu -- that don’t recognize same-sex marriage."

Ciafone is not worried about being the more conservative candidate, he views it as an asset. "Even with the diversity of this neighborhood," he said, Astoria "is a moderately conservative area."

Preparing for the Job

Simotas, who serves on Queens Community Board 1, said she is the more qualified candidate because she has experience working alongside lawmakers. Specifically, as a board member with the United Community Civic Association, Simotas helped organize community meetings, rallies and news conferences in a campaign with Gianaris to curb construction of highly polluting power plants in Astoria. Gianaris has endorsed her.

Ciafone said he is in an uphill battle against Simotas, who, he said, "was groomed for the position."

Unlike Simotas, "I have a record of serving the community via elected office. [She] was appointed to everything [she] had," said the 40-year-old. He was elected to Community School Board 30 and served as treasurer and then president. 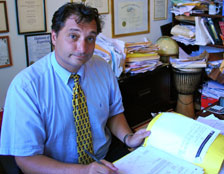 Assembly candidate John Ciafone is a candidate in the Democratic primary but he says if he loses that contest he wil run again as a Republicanin November.

Ciafone ran against Peter Vallone Jr. for City Council in 2002 in both the primary and general elections.

"Back then we did pretty good, even though we were outspent and out organized. We didn't have the support of the machine," Ciafone said. He finished second behind Vallone, who won both elections.

Just as in 2002, Ciafone intends to pursue his quest for office in November if he loses the Democratic primary to Simotas. In 2002, he challenged Vallone on the Libertarian ticket. This time, he will run on the Republican, Independence and Conservative party lines.

Ciafone said it's an odd arrangement, but necessary because he is working against the "Democratic machine."

However, his campaign faces other hurdles. He claims residency at three addresses, but only one -- his mother’s home -- is within the 36th district. Furthermore, his voter registration is in the 30th Assembly District, where he lives with his wife and children.

Simotas, meanwhile, has held a few fundraising events and been going door-to-door to voters, According to what her campaign filed, Simotas has $119,247 in her campaign coffers.

She said she has been enjoying this part of the campaign and attributes it to her upbringing in the community, which encouraged her to be civically involved.

"We always had that benefit in Astoria, the legacy of community engagement," she said.