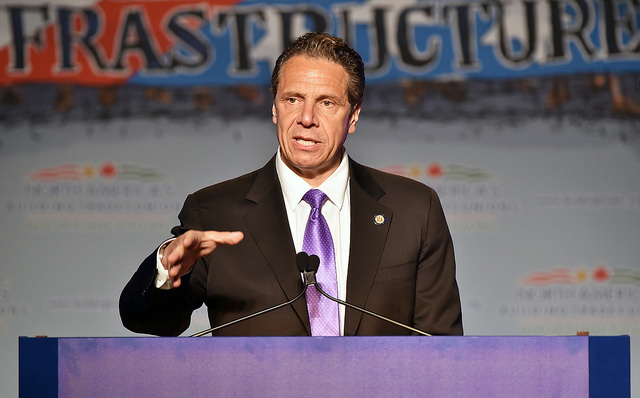 In trying to stifle the blaze that has become U.S. Attorney Preet Bharara’s investigation into the Buffalo Billion economic development program, Governor Andrew Cuomo has repeatedly invoked the name of Bart Schwartz, a former federal prosecutor the administration has retained (or is in the process of retaining) to carry out an “independent” review of the project.

In acknowledging that people close to him were being investigated in relation to the Buffalo Billion, Cuomo announced Schwartz’s hire on April 29.

When the Public Authorities Control Board met this week and approved without debate another $485 million for a key Buffalo Billion project, the administration quickly reminded reporters that Schwartz would now provide another layer of oversight by considering approval of disbursement of the funds.

The day before, Cuomo told reporters he had yet to finalize Schwartz’s contract. The governor also appeared unsure whether Schwartz would make his findings public. Administration officials later clarified Schwartz would release his findings as long as doing so wouldn’t interfere with Bharara’s investigation, which appears to be focused on bid-rigging and a web of relationships among private and public entities.

Even as Schwartz’s presence is held up as a measure of confidence in the Cuomo administration and the state’s vast economic development apparatus, several questions about Schwartz’s role and power remain. These include whether Schwartz has already started his work; when his contract will be available to the public; if his efforts are duplicative of the U.S. attorney’s office’s; and what authority Schwartz will invoke to audit the nonprofits that oversee the Buffalo Billion, which are said to be independent from the Governor’s Office.

Both the Cuomo administration and Schwartz’s recently-hired public relations firm failed to respond to Gotham Gazette’s questions about Schwartz’s role.

“In the real world someone doesn’t start work before they have a contract,” said Blair Horner of The New York Public Interest Research Group.

In conjunction with Cuomo's office, Schwartz issued a statement April 29 detailing some of his plans and saying he would begin immediately.

“The state has reason to believe that in certain programs and regulatory approvals they may have been defrauded by improper bidding and failures to disclose potential conflicts of interest by lobbyists and former state employees,” Schwartz wrote, in apparent reference to Cuomo associates Joseph Percoco and Todd Howe.

It remains unclear exactly what Schwartz will be reviewing and how he will conduct his work. Part of the uncertainty and unease around Schwartz’s role held by some stems from Cuomo’s messaging around the investigation and various long-standing concerns about the Buffalo Billion.

There are three major questions about the Buffalo Billion raised by watchdogs and, it seems, Bharara’s office: Was the contracting process designed to benefit Cuomo campaign donors? Did Cuomo loyalists use their connections to play both sides of the contracting process? Are SUNY Polytechnic, the college that oversees the distribution of Buffalo Billion funds, and its associated nonprofits doing enough to make sure corporations like SolarCIty make good on their jobs promises and other deliverables. SolarCity recently appeared to revise the number of jobs it expects to host in its Buffalo Billion-funded factory and pushed back the factory’s open date.

Cuomo himself appears to have introduced a fourth question, which goes something like: Did someone steal money? It's a question watchdogs see as misdirection given that many of them doubt any money was actually secretly taken by lobbyists or contractors - they are more concerned about contracts being awarded improperly.

While Cuomo is calling it a measure to ensure integrity, Schwartz’s appointment is seen as a smokescreen by many legislators and watchdogs who are concerned about the Buffalo Billion. The governor has continued to tell the press that the investigations by Bharara and Schwartz will examine the possible wrongdoing of “one or two” individuals while analysts say Bharara’s subpoenas indicate an investigation into systemic corruption.

“This is a major effort the state is running that is working extraordinarily well and is vitally important to upstate New York,” Cuomo told reporters in Syracuse on Wednesday of the Buffalo Billion. “There is no reason to stop investing in upstate New York, to hurt the upstate economy, because a couple of people may or may not have done something wrong.” He went on to say: “You have questions raised about the conduct of several individuals. That’s now being investigated by the U.S. attorney. We also started our own internal investigation by a former prosecutor.”

Cuomo has also said he will “throw the book” at anyone found to have violated the public trust, and that he holds every Buffalo Billion dollar as “sacred.”

Without seeing Schwartz’s contract it won’t be possible to ascertain what Cuomo has actually tasked him with investigating. It also won’t be clear what the public is actually paying him to investigate a project that watchdogs say should have already been monitored by the state Comptroller.

“It’s ironic that [Cuomo] has gone out and hired someone who apparently will have access to contracts and information that the Comptroller of New York, who is independent, doesn’t have access to,” said E.J. McMahon, president of the Empire Center for Public Policy. McMahon did note that Schwartz isn’t “political” or “one of the governor’s people,” though.

When Schwartz’s role was first announced on April 29, Cuomo Counsel Alphonso David said of the Buffalo Billion, “Any grants made by this program will be thoroughly scrutinized – past, current or future.” David’s statement accompanied Schwartz’s in the same release to the media.

Schwartz may indeed be performing duties that once belonged to the Comptroller, Thomas DiNapoli, who was formerly allowed to review SUNY and CUNY contracts. That ability was stripped by Cuomo and the Legislature in 2011. SUNY Polytechnic has created two nonprofits to distribute state cash to various economic development projects across New York.

John Kaehny of Reinvent Albany, a group that has been closely tracking the Buffalo Billion, said that it is unclear to him what problems the governor has asked Schwartz to examine, especially because Schwartz’s contract has yet to be made public. “Where is his contract? Exactly what does it say?” Kaehny asked, wondering whether Schwartz is focused on everyday expenditures or aspects of possible pay-to-play and conflict of interest in the awarding of contracts.

After news broke this month that Bharara had subpoenaed Cuomo’s office, DiNapoli unveiled a series of reform proposals that watchdogs say would upend how the Buffalo Billion is administered and overseen by the state. His plan would ban lump sum appropriations, create a council to plan capital spending, and require economic development program proposals to be scored and ranked in a public database.

“Public authorities are not subject to the same checks and balances that apply to state agencies, resulting in hundreds of millions of dollars being spent annually with limited oversight,” reads a release from DiNapoli’s office detailing the reforms. “DiNapoli’s proposal would require state-funded public authority projects to be scored and ranked using measurable and objective criteria. His proposal also requires more disclosure of public authorities’ spending and financing activities.”

DiNapoli also recently indicated that he may investigate parts of the Buffalo Billion.

“Why, other than Cuomo saying so and Schwartz saying so, is there any reason to think that Schwartz is completely independent of the governor's office?” asked Kaehny. “Schwartz is not a court appointed monitor, nor is he reporting to a board of directors. He is effectively reporting to a CEO with no board whose top associates are under federal investigation.”

Dick Dadey, executive director of government reform group Citizens Union, said it is critical for the integrity of Schwartz’s work to make the terms of his employment clear. “If this investigation is about transparency it should start by making this contract public to reassure people that there will not be a repeat of the Moreland Commission where the governor promised independence but abruptly shuttered it.”

Cuomo told reporters on Tuesday “We're doing a contract that's being finalized now. When it's finalized we’ll give it to you.” He added negotiations were about “the dollars.”

The use of nonprofits to disburse government funds has led many to question the application of state procurement rules requiring an open request for proposals process. The RFPs for two major Buffalo Billion projects appeared tailored for the two firms that won them, both of which donated generously to Cuomo.

Kaehny, in a press release, asked members of the Public Authorities Control Board, a five-member group appointed by the governor, four of whom are recommended by heads of the Legislature’s majority and minority conferences, that is tasked with approving funding for state economic development projects, to pose that very question in their meeting on Wednesday. It was not asked.

However, the Assembly Democrats' representative on the board said she was voting for disbursing the funds with several conditions of more transparency and oversight.

SUNY Poly has previously insisted that the nonprofits do abide by those rules.

State Attorney General Eric Schneiderman’s office declined to comment on whether the office believes the law actually applies to the nonprofits.

However, as Cuomo distances himself from SUNY Poly and its decisions in contracting, his appointment of Schwartz brings into question just how much control the governor does have over the SUNY nonprofits. It appears, in a sense, by hiring Schwartz Cuomo is saying he has direct authority over all the entities involved despite legal and rhetorical framework painting them as independent.

Kaehny said he doesn’t believe Cuomo has “the legal authority” to direct the Empire State Development Corporation or SUNY’s nonprofits to allow Schwartz to review their contracts or approve them. “ESDC is a public authority with a legally independent board and the nonprofits also have legally independent boards,” said Kaehny. “If they want to vote to subject themselves to control by Schwartz, they could do that, but that would be abdicating their fiduciary duty to a consultant to the governor, which raises questions of separation of powers. Are these entities independent of the governor or not? If they are not, then why are they exempt from state contracting and conflict of interest rules?”

On Tuesday Cuomo was asked about the scrutiny of his use of nonprofits and whether he would consider changing the process. “What's interesting is that all predated me, right?” Cuomo said to reporters. “That went back to Governor Pataki, who was a saint. That was all in place and we used the existing mechanism; we did not design that mechanism.”

Watchdogs say this is another misdirection by Cuomo as the particular system he has used to expedite Buffalo Billion was pioneered by SUNY Poly head Alain Kaloyeros during Cuomo’s time in office.

“The governor said the structure was here when he got here,” said McMahon of the Empire Center. “That isn’t true. It was set up by a very ambitious college president [Kaloyeros] who wanted to expedite the construction of his empire. The governor has used it because he can get done what he wants to get done faster. It avoids the niceties that usually go into spending public money.”

Dadey said there should be no mistake that Schwartz’s full task is to examine systemic issues in the Buffalo Billion and not just look for possible wrongdoing. “The SUNY cartel is hard to follow and that is a problem. Bart Schwartz's task is not just to find out if someone did something wrong, but to examine this opaque system and suggest ways to improve it, so voters can have faith in it.”