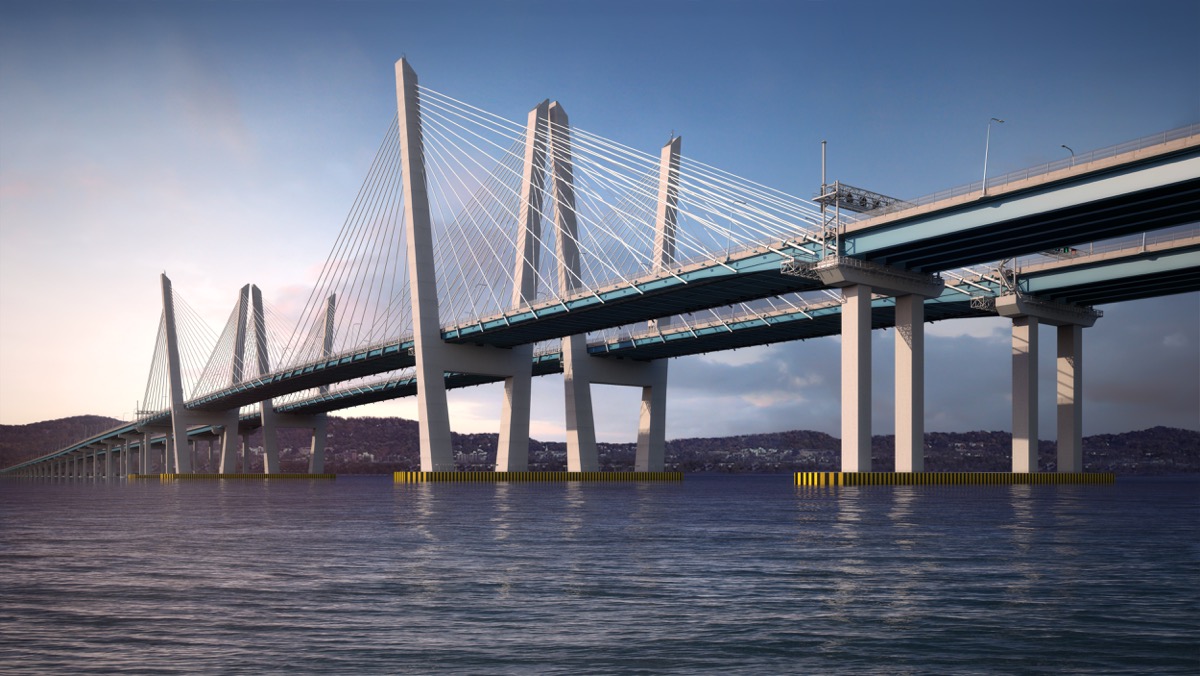 a rendering of the New NY Bridge, via The Governor's Office

It is bipartisan legislation that steadily built momentum since its introduction a year ago, gaining support from state legislators, New York City Hall, labor unions, good government groups, and the private sector along the way. But despite proponents’ expectations, the New York City Public Works Investment Act—which would have extended the authority to use “design-build” contracts to some New York City agencies—was not passed by the end of Albany’s legislative session.

The bill, introduced last June, would have allowed five city agencies, including the Department of Transportation and the Department of Environmental Protection, to use the project delivery method known as “design-build” in which a single contractor is responsible for both a project’s design and construction. Both DOT and DEP, as well as a Mayoral spokesperson, have said that design-build would save millions of dollars more annually over traditional “design-bid-build” methods that mandate agencies hire separate entities for design and construction, thereby almost always assuming additional costs.

Initially seen as contentious due to early objections from labor unions, the bill was tweaked to guarantee project labor agreements and was eventually backed by labor and trades groups including the New York Building Congress, Partnership for New York City, the Real Estate Board, the Building and Construction Trades Council of Greater New York, the NYC Central Labor Council, DC 37, and the General Contractors Association.

Design-build also has support from several think tanks and good government groups like Citizens Budget Commission, the Center for an Urban Future, the New York University Rudin Center for Transportation Policy and Management, and the Bipartisan Policy Center.

State Assembly Member Michael Benedetto, a Bronx Democrat who sponsored the Assembly version of the bill, had collected memos from the above groups and delivered them to members of the Assembly Cities Committee, which Benedetto chairs. Earlier this month, with weeks remaining in the legislative session, Benedetto told Gotham Gazette that he was confident the bill would pass the committee and “hoping against hope” it would reach Cuomo’s desk. Instead, the end-of-session deadline came and went, and the bill remains in the Cities Committee and Rules Committee in the Assembly and Senate, respectively.

“It was, admittedly, a little bit depressing,” Benedetto said on Monday, the first business day after the session ended in the wee hours of Friday night into Saturday morning. “I thought everyone could have been satisfied from this and the city could have saved some money, but it wasn’t to be.”

The bill ultimately died when members of the Assembly and Senate, negotiating possible amendments to the bill, were unable to reach a consensus. The Senate Cities Committee voted unanimously to pass the bill in its current state, but according to Benedetto, some Assembly members took issue with the bill’s provisions, or lack thereof, for minority and women-owned businesses.

Under the bill’s current language, city agencies would be allowed to consider consultants’ record of compliance with laws “concerning minority and women-owned business enterprise participation” and would have to follow “objectives and goals” for hiring such businesses outlined in the city’s administrative code. But some Assembly members saw these measures as insufficient for ensuring design-build contracts would involve minority and women-owned businesses, according to Benedetto.

State Senator Andrew Lanza, a Staten Island Republican who sponsored the Senate version of the bill, did not respond to a request for comment.

Proponents of design-build expressed surprise and frustration that the bill was not passed. In a statement to Gotham Gazette, a spokesperson for Mayor Bill de Blasio said design-build would be “the single most effective step” to update aging infrastructure and build new schools and public housing.

“The City looks forward to continuing work with the incredible coalition who supported the legislation—including industry, labor and advocates—to get it passed during the next Albany session,” the spokesperson said. Legislators will return to the capital in January after this fall’s elections for all 150 Assembly and 63 Senate seats.

Design-Build Institute of America Executive Director and CEO Lisa Washington said the institute was “incredibly disappointed” in a statement to Gotham Gazette, and pointed to a DBIA report published in April that reflects steadily increasing use of design-build by state agencies. Gov. Andrew Cuomo has regularly praised use of design-build by the state.

“We have no reason to believe the bill failed on the merits,” Washington said. “We are confident that similar bipartisan legislation can pass the New York Legislature next session, and we will be working hard to make sure that happens.”

Citizens Budget Commission Vice President Maria Doulis told Gotham Gazette she was disappointed with the outcome, and said that the state is “moving very slowly in the area of updating and modernizing its procurement.” She added that, in her opinion, a dispute over language accounting for women and minority-owned businesses could have been easily solved.

“Honoring that consideration has not impeded this from going forward in other places,” Doulis said. “You can do it by maintaining flexibility but also including some requirements for subcontractors.”

Although it will remain off-limits for city agencies for now, certain state agencies are authorized to use design-build thanks to a law that was passed in 2011 and renewed in 2015. Ironically, the latest state agency to exercise this power will do so in Manhattan—Governor Andrew Cuomo announced on Monday that the state’s billion-dollar expansion of the Jacob J Javits Center will use a design-build contract.