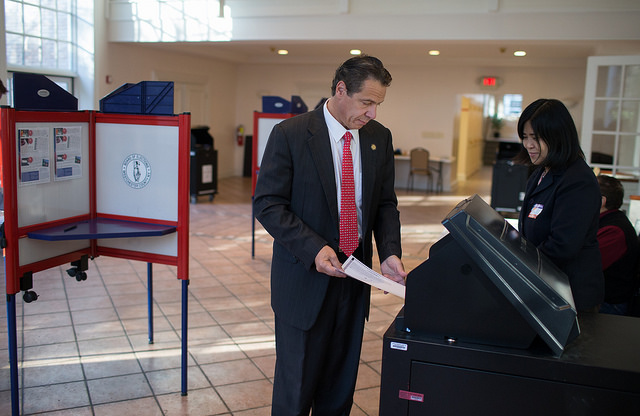 In April, Hillary Clinton and Donald Trump won the Democratic and Republican New York presidential primaries, respectively. New York has a well-publicized and worsening voter turnout problem, and approximately one in four registered New York voters could have no say in the presidential primary outcomes even if they wanted to - other than by changing their party affiliation more than a year prior.

According to the New York State Board of Elections, as of April 1 there are 11,726,842 registered voters in New York (this figure includes both active and inactive voters). Of those voters, 2,485,475 are unaffiliated with a party, and 717,182 are registered with parties outside the two major political parties (Conservative, Green, Libertarian, Working Families, Independence, etc. - people regularly register with the Independence Party incorrectly thinking they are registering as “independent,” or unaffiliated). There are almost as many unaffiliated registered voters in New York as there are registered Republicans (2.7 million). There are 5.8 million registered Democrats across the state.

Despite not being allowed to vote in party primary elections, unaffiliated voters, along with registered Democrats and Republicans and “third party” voters, foot the bill for the administration of those elections. In New York, the cost of a primary election in 2016 is $25 million, which amounts to the fourth most expensive primary election in the country, and this cost to taxpayers is not limited to presidential primaries; New York Congressional primaries and local and state legislative primaries cost $25 million each. In 2016, New York is holding three different primary days (presidential in April, congressional in June, and state/local in September).

New York’s closed primary system and the costs associated with it - both monetary and democratic - have resulted in calls for change.

New York State Assemblymember Michael Cusick, a Democrat who represents part of Staten Island, introduced legislation earlier this year that would consolidate all non-presidential primaries to a single election day (Assembly bill A09108). Currently, U.S. Congressional primaries and state and local primaries are held on two separate days, costing the state $50 million, about half of which could be saved by consolidating. In February, the Democrat-controlled Assembly passed the bill, which would move all non-presidential primaries to the fourth Tuesday in June, the current date of congressional primaries. In the Republican-led state Senate, however, the bill was not taken up.

Some state senators are hesitant to support legislation that would require them to prepare for an election while they are still working in the capital - the state legislative session runs from January to mid-June. Currently, senators and Assembly members have the summer of election years to prepare for their September primaries as needed (state legislators serve two-year terms).

A bill almost identical to Assemblymember Cusick’s was introduced to the state Senate by Republican Sen. Fred Ashkar, who represents the Binghamton area (Senate bill S6604). But, Ashkar’s bill would assign the third Tuesday in August as the singular election day for all non-presidential New York primary elections rather than the fourth Tuesday in June. The bill, introduced in January and passed by the Senate in March, would still save taxpayers money by consolidating election days but because it calls for an August election day, it would allow state legislators to avoid the conflict between working and campaigning. Yet, Ashkar’s bill has no chance in the Assembly because Democrats see it as an effort to suppress the vote, given the late August date, when people are even less likely than usual to be paying attention to politics or in town to vote.

While either consolidation of the congressional and state/local primaries would save taxpayers money, without opening up the primaries voters registered as unaffiliated would remain unable to vote until the November general elections.

Assemblymember Fred Thiele of Long Island is unaffiliated with a political party. Thiele introduced legislation (Assembly bill A9661) in March that would allow unaffiliated voters to vote in primary elections. Many voters were hoping that the bill would be passed in time for this year’s presidential primary; however, election day came and went as the bill sat in committee.

This year’s presidential primaries were notably frustrating for many New York voters. While unaffiliated New York voters are ordinarily unable to vote in their state’s closed party primaries, thousands of voters found themselves unable to vote despite having registered in one of the two major parties. With one day remaining before the April 19 primaries, voter advocacy group Election Justice USA filed a lawsuit in New York federal court on behalf of thousands of voters.

According to Election Justice USA, the lawsuit represented both voters whose party affiliation had been inexplicably changed to unaffiliated and voters who had been left off of voter rolls.The group’s goal was to secure an emergency declaratory judgement, which would open New York’s Democratic primary to voters registered as unaffiliated and Republican. The judgement was deferred and the primary remained closed.

“Most of the talk this year had to do with the presidential primary, and it was sort of an exception in that a lot of young people who were unaffiliated were vehemently for [Bernie] Sanders, but I think in general, [open primaries] would probably help more moderate candidates and less partisan Democrats,” Skurnik said in a phone interview with Gotham Gazette.

While less strict partisanship might be one potential benefit of opening primary elections, Skurnik also points out that there is a question of fairness that should be considered when discussing open primaries.

“[A closed primary] allows people who are supporters of the Democratic or Republican party to pick the candidates. It doesn’t allow people who really aren’t loyal or committed Democrats or Republicans to have a say in who’s going to be the party nominee. There’s an argument -- why should someone who votes for Democrats for office 25 percent of the time have any say in picking a Democratic candidate?”

This question of fairness is not limited to the role of unaffiliated voters in the Democratic and Republican primaries. While much smaller than the Democratic and Republican parties, third parties have active registered voters, and opening presidential primaries to allow any voter to vote in any primary regardless of party affiliation could be detrimental to these minor parties.

Minor parties, according are Skurnik, “are really ideological parties.”

While they tend to be actively engaged in politics, voters registered with minor parties don’t make up a large portion of the electorate in New York. For example, there are 50,000 voters registered with the Working Families Party across New York according to Skurnik, and while unaffiliated New York voters are more numerous than “third party” voters, their political tendencies are more difficult to determine. However, there is one observable pattern shared among unaffiliated voters.

Across the country, 43 percent of all registered voters are registered as unaffiliated. According to Open Primaries, an advocacy group that advocates for the establishment of open primaries in all 50 states, there are approximately 26 million registered voters closed out of voting in major party primary elections across the country. Currently, there are 14 states in which both major parties run open presidential primaries.

The total cost of running elections in all closed primary states is $300 million. This figure only includes closed primaries run by the state -- caucuses, while also exclusionary to unaffiliated voters, do not cost taxpayers anything in the states in which they are held. This is because caucuses are paid for by the parties themselves. Some question why states pay for and implement closed primary elections at all given that they are controlled by the parties. (For the recent presidential primaries in New York, Democratic voters voted not just for a nominee, but also for delegates to the party convention; Republicans voted only for a nominee, their New York delegates to the RNC are chosen at a party meeting.)

One alternative to the closed primary system is the system employed by California for its presidential primary elections, which is something of a hybrid. In California, parties can choose between running a closed primary or a modified closed primary in which the party can choose to allow “no party preference” (NPP) voters, otherwise known as independent or unaffiliated voters, to vote in their primaries. In this year’s California presidential primary held on June 7, the Republican Party chose to run a closed primary, excluding NPP voters and allowing only registered Republicans to vote. The Democratic Party chose to run a modified closed primary, allowing both registered Democrats and NPP voters to vote in the Democratic primary.

California not only runs a modified closed presidential primary, but it also joins Washington and Nebraska in running a “top two” open primary system for all non-presidential primary elections. In the “top two” system, all qualified candidates are listed on the ballot; all voters, irrespective of party affiliation, can vote for whichever candidate they prefer; and the top two vote-getters, irrespective of party affiliation, move on to the general election. This system often results in two candidates of the same party opposing each other in the general election.

“We need a national movement to adopt the “top-two” primary (also known as an open primary), in which all voters, regardless of party registration, can vote and the top two vote-getters, regardless of party, then enter a runoff,” Schumer wrote. “This would prevent a hard-right or hard-left candidate from gaining office with the support of just a sliver of the voters of the vastly diminished primary electorate; to finish in the top two, candidates from either party would have to reach out to the broad middle.”