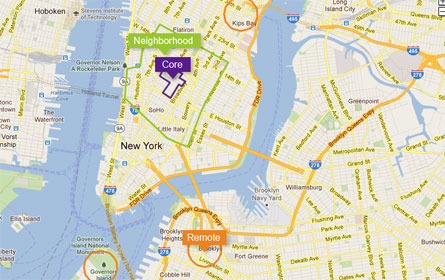 New York University took back its place in the center of New York’s university expansion controversies by submitting its NYU 2031 expansion proposal to the city last month.

The ambitious plan adds 6 million new square feet of academic and residential space. 2.5 million will be in Greenwich Village, NYU’s historic home, spread across four buildings near Washington Square Park. The rest of the expansions will take place along the health corridor on 1st avenue, Downtown Brooklyn (for NYU-owned Polytech Institute) and Governor’s Island.

The university says that it needs this space to grow and compete and that its plans are community-friendly. John Beckman, Vice President of NYU said that by “incorporating spaces that no one would meaningfully count as open spaces now -- like roadways, parking areas, and fenced in areas -- into our renovation of the open space, we actually add open space on the two blocks even with the footprint of a new building.”

It will also create jobs, including 2,400 construction jobs over the next 20 years, generating an extra $490 million for New York’s economy, according to the Greenwich Village-Chelsea Chamber of Commerce. Some laborers and construction workers supported the plan and urged officials to sign off on it.

But opponents of the plan which include local residents, tenant associations, community boards and even some NYU faculty, say that by removing what little space the community has left and flooding it with thousands of new students would ruin the village as a neighborhood and that 20 years of construction would fill their lives with noise and pollution. NYU requires multiple zoning waivers for the plan to go forward.

New York City already has the most college students of any city in the nation, including Boston, and their population keeps rising. Many universities across the city are aggressively expanding their campuses and student bodies.

Columbia University is already building in northern Manhattan, while Cornell University will soon build a satellite campus on Roosevelt Island. NYU-owned Polytech is spreading throughout Metrotech Plaza in downtown Brooklyn, having recently acquired several floors of space from a Bruce Rattner owned building, with more on the way. Fordham University expanded its Lincoln Center campus and CUNY is growing as well, with new buildings at John Jay and City College, with a new community college on the way.

“Universities benefit greatly from being in the city,” said Sharon Haar, an architecture professor at the Univ. of Illinois at Chicago who wrote the book “City as a Campus.” She said that despite some conflicts over space, universities feed cities with high tech industry and skilled service jobs and in turn, benefit from being in the city by tapping into its culture, infrastructure and body of potential students.

The NYU expansion is the largest single development plan the village has ever seen. In size and expense, it’s comparable with Columbia’s expansion, which also added 6 million square feet of space which cost about $6.3 billion.

But the challenges differ. Columbia’s expansion ran into opposition from several firmly-rooted private businesses which challenged the Empire State Development Corporation’s eminent domain in court. The court ruled against the businesses in 2010 and ruled again, recently, that the corporation may be given power to evict the tenants, if the sides fail to reach an agreement. NYU’s plan won’t involve eminent domain but public land, which earned it more enemies from Greenwich Village and beyond.

“It’s clear that the overwhelming sentiment from Lower Manhattan residents, as well as from NYU’s own faculty, workers, students and tenants, is against the scheme,” said Andrew Berman, executive director of the Greenwich Village Society for Historic Preservation.

NYU’s Beckman countered with a university-commissioned poll of 600 NYC voters held in 2011, which found that 70 percent of respondents favored the expansion. The poll also found that the Greenwich Village project which accounts for 2.5 million square feet out of the total, was the most popular among respondents. The plan was phrased as “the creation of a new public school in the Village and new open spaces and parks.”

Beckman also said that no upzoning would take place and that the ratio of the buildings floors to lot size would not be altered. However, the buildings do require zoning changes and the demapping or elimination of certain streets, squares and gardens. In response to suggestions that NYU build elsewhere, like the financial district, Beckman said that more than half of the planned expansion was already happening outside the village. But this is not enough for many.

Residents say that parks and other open spaces are getting destroyed rather than created and point to the fact that current zoning regulations. Furthermore, the influx of 10,000 to 12,000 students and staff can overwhelm local supermarkets and basic services, said Kelly Magee, a spokeswoman for Councilwoman Margaret Chin who represents the district.

“Tearing down gardens and houses and building a huge tower on top of that, that’s not expansion, that’s desecration of a neighborhood,” a community resident said at a city hall rally against the proposal.

Residents also worry about the debris, pollution and noise that will accompany the construction for the next 19 years. After similar concerns were raised in upper manhattan, Columbia pledged to make its construction site as environmentally friendly as possible by using special construction equipment to minimize dust and soot. It’s unclear whether NYU would attempt the same thing in Greenwich Village but the residents don’t look forward to any prolonged construction on such a scale.

They are also worried about the area belonging increasingly to NYU, which is the source of local gripes. “The shared open spaces that NYU currently stewards have broken fences, dirty walls, poor lighting, collapsed concrete and derelict play spaces,” said resident Ellen Moran. “They have given Greenwich Village broken fences, broken promises and broken contracts. Let’s not add broken government to the list.”

Suspicion towards the university is uncomfortable for some faculty members who live in the neighborhood and oppose the plan. Some turned out to rallies to oppose the expansion but many didn’t want to reveal their names for fear of going against the will of the university.

“It’s not really NYU â€“ it’s the administration and the board of trustees that hatched this plan,” said an associate humanities professor, who declined to identify himself because he was concerned about backlash from the university leadership for himself and his department. “We’re completely devastated.”

He added that the expansion is detrimental because it will be funded with basic tuition which will put NYU students even deeper in debt. NYU students are $659 million in debt, the highest in the country for a non-profit university, exceeding the GDP of several nation states.

Beckman said that the expansion will be funded through a combination of philanthropy, financing, and the use of working capital. “We always take account of tuition in all our financial decision-making; if we don't think a project is affordable, we don't do it -- it's that simple,” he said.

The plan is currently under review with Manhattan borough president Scott Stringer, who has two more weeks to go over it. Stringer is known as an ally of university expansions in Manhattan, helping broker agreements for the expansions of Columbia and Fordham. But he remained elusive on what he would do about NYU. Stringer makes no binding decisions on zoning but his advice can carry weight among lawmakers.

“To address some of the issues they care about, I have to look at what small business thinks about this project, what larger city economic issues, how we educate our kids, so there’s a lot that goes into the system,” he said.

Councilwoman Chin took a slightly stronger tone. “I have serious concerns about the University’s expansion plan. NYU has asked for a lot, and I am not sure they need it all,” she said. Magee said that Chin is currently reviewing the plan and talking with all parties to try to come up with the best possible solution.

After Stringer, the plan will go to City Planning for 60 days, after which it will go to the City Council for final review and a vote. This gives the different sides several months to try to convince elected officials.

“History shows that anything that NYU wants, NYU will get,” said Berman. “The only way to stop it is to prevent them from doing it.”