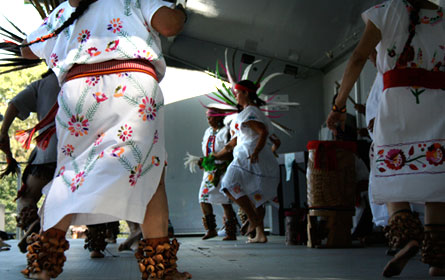 A massive blue truck rolled down West 197th Street in the Bronx, honking as it passed a Labor Day weekend block party brought to them courtesy of Councilmember Maria Baez.

The councilmember's image was splashed along the truck's side above her slogan, "Strong Values, Proven Leadership."

Moments later, Baez made what her opponents would call an unusual appearance in the neighborhood. She shook hands, sampled the street fair's products and presented a City Council proclamation to the sponsoring organization.

"This is the first time I've seen her in the community for a long time," said Yudelka Tapia, a City Council candidate for the 14th district who also attended the event.

It is this presence, or lack thereof by some accounts, that could cost Baez her council seat next week. A Bronx mainstay, Baez has represented the 14th district, which includes Fordham, Kingsbridge, Morris Heights, and the West Bronx, since 2001. Even though Baez says she has lived in the district for 40 years, residents and community activists complain that they never see her. She has the worst attendance record of any City Councilmember, prompting her opponents to argue she doesn't show up at City Hall either.

These complaints have spurred the toughest challenge for the councilmember yet. She faces two primary opponents: Tapia, a city auditor, and the Rev. Fernando Cabrera, who has snagged the support of the Bronx Democratic Party.

Despite this tough fight, Baez brushes critics off. She says she is confident she'll be re-elected.

"I am the one that has been here for 40 years," Baez said as a ballad from a local teenager blasted down the street. "No one knows who the other two candidates are."

An Incumbent Who Lost the Party 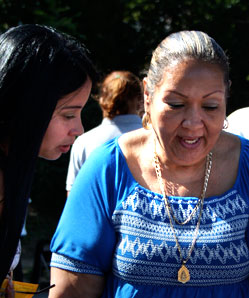 As an ally of the former head of the Bronx Democratic Party, who was pushed out in late 2008, Baez has become the bull's eye for the Bronx's new political machinery.

One Bronx leader told Gotham Gazette earlier this year the new leadership's goal this election season would be to see Baez kicked off of the council.

Baez ignores the competition. She has refused to show up to the two scheduled debates so far, arguing, dismissively, "There was no one to debate." She has said that the withdrawal of support from the Bronx Democratic Party gives her an opportunity to run a "grassroots" campaign.

"Everywhere I go I am well-received," said Baez, dressed in jeans and a blue top. "Everything I've done, I've done with the partnership of my community."

Even though the Bronx Democratic Party abandoned her, Baez is not running completely solo. She has gleaned the support of Council Speaker Christine Quinn, former Bronx Borough President Fernando Ferrer and the former head of the party, Assemblymember Jose Rivera.

As her accomplishments she points to getting six bills approved since 2001 (which pales in comparison to many other council members). She says she has secured funding to refurbish all of the playgrounds in her district, and was able to get funding for the district's first family justice center, which she said would open during the next term. So far she has raised $67,425 for her bid and has received $70,170 in matching funds.

Baez wants another four years, she says, because she needs to see the projects she started through.

"There are a lot of issues I want to be able to address," she says, pointing to senior and youth services as her top priorities.

On stage at the Bronxnet studio, the county's public access channel, one chair was empty. It was saved for the absent Baez. 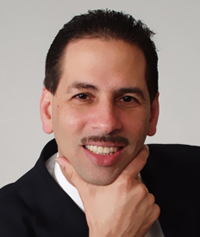 The other two candidates, Tapia and Cabrera, were ready to go over the district's issues, each claiming they have been the ones to travel the community. Not Baez.

But Cabrera's connection to the district, and party affiliation, has also been questioned. Up until July 2008, Cabrera lived in Westchester County for nine years. He was born in the Bronx, and has lived there for a total of 14 years, he says. But also while in Westchester, Cabrera was a registered Republican. He changed his party affiliation last year.

"I have been living in the Bronx more than any other place," said Cabrera, a professor at Mercy College. "My fruits are Democratic fruits."

As for the issues, Cabrera said his first priority as a City Council member will be to propose legislation to require living wages. Pointing to the area's unemployment rate -- the Bronx has the highest in the city at 12.5 percent -- Cabrera also wants to help residents access city services by consolidating the application for government assistance, like food stamps and Medicaid, into one application. Cabrera is not far behind Baez in the money race with $52,082 in private funds and $81,670 in matching.

Tapia argues her ties to the community run deep, having had four sons at local public schools. She points to her record of community service in the district, first as an advocate for the area's livery drivers, then as a president of a local parent teacher association. 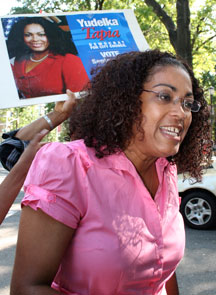 The crux of her campaign, she says, is to improve the area's schools and lobby for more seats and space. She leads in the money race with $66,492 in private contributions and $72,721 in matching funds. Her public funding was initially delayed because she failed to submit the required documentation.

But Tapia, too, hasn't been immune from controversy. Tapia fired her chief of staff, Onix Sosa, after she found out he had managed buildings in the Bronx that had a multitude of outstanding housing code violations. He had also worked for Sen. Pedro Espada Jr. and had headed up the Upper Manhattan Council Assisting Neighbors, which was the subject of an investigation during the council slush fund scandal.

In the midst of this politicking, the city is yet again planning to redevelop a long vacant historic building in the district: the Kingsbridge Armory.

The Giuliani administration attempted to unsuccessfully turn the armory into a sports and retail complex more than a decade ago. Now the city's Economic Development Corp. and developer Related Companies are proposing to turn it into a large shopping complex, movie theater and community space.

But the plan is controversial. Earlier this month, Bronx Borough President Ruben Diaz Jr. voted to reject the project. Because a borough president's vote is nonbinding, the plan is still projected to go before the City Council before the end of the year.

At issue is a community benefits agreement, which would guarantee those living in the community jobs at a living wage and school space outside of the complex.

Baez has campaigned against the proposal's anchor store, saying she wants to make sure small businesses remain viable. She is also pushing for a youth recreational facility as part of the plan, she said.

Tapia has said she would not support the project unless the city and Related Companies signed the community benefits agreement. She would like to see at least 3,700 square feet of community space in the facility.

Cabrera has signed onto the borough president's plan. He said he wants to see living wages implemented at the site and the construction of four schools as part of the agreement.

As Tapia circulated the crowd at the Labor Day street fair, Baez looked on from a bench at the top of a hill. Minutes later, she climbed the stage to offer recognition for the fair's host, the Kingsbridge Heights Neighborhood Improvement Association.

Following Baez's accolades, the event's organizer took to the microphone: "Let's hear it for Maria Baez," she yelled.

A subdued applause followed. After another call, the crowd's volume grew. When asked moments later, how she was different from the other candidates, Baez said: "The difference is for the last 30 years, I've been working with this community."

She continued: "They know who Maria Baez is."