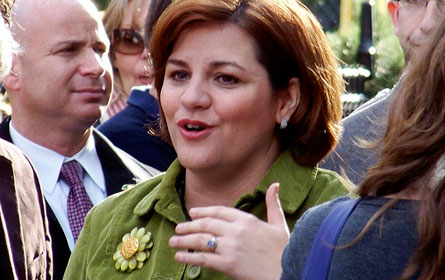 A week after besting an unsuspecting comptroller by a narrow 50,000 votes, according to preliminary results, Mayor Michael Bloomberg may now have bigger things to worry about.

Come January, the so-called wounded mayor could face a drastically different City Council -- one that members say will be not only be more progressive, but also more aggressive.

With 13 new members, the 2010 City Council class, armed with Tuesday's general election results and fueled by anti-term limit extension rhetoric that dominated many of their campaigns, could bring more bite than Bloomberg bargained for. Members old and new are promising to turn the council from what critics say is a rubber stamp into the check that it's meant to be.

"It was certainly not a mandate, and hopefully this will empower and embolden a new City Council and the leadership that reflects that," said Councilmember Letitia James of Brooklyn of last week's results.

The question remains whether Council Speaker Christine Quinn, a longtime Bloomberg ally, can survive the council's overhaul and if the issues and positions that dominate 2010 will reflect some council members more combative approach.

For some of the past four years, the City Council has been marred with claims of complacency and controversy. Quinn shepherded through an unpopular approval of congestion pricing and spearheaded the divisive extension of term limits -- both votes, critics say, were done at Bloomberg's behest. In the past, members have accused the speaker of bottling up legislation, despite having dozens of sponsors at the council.

Quinn was weakened by the now-notorious slush fund scandal and, more recently, angered members by delaying a late and tepid endorsement of Democratic mayoral candidate Bill Thompson. All the while, Quinn's relationship with Bloomberg has been seen as extremely amicable.

Tuesday's results were not only a message to the administration, say new and incumbent members of the City Council, but also a directive to the City Council to trade in its roses for thorns.

"The results were very clear on Tuesday that there is a great level of dissatisfaction with the status quo," said Councilmember Melissa Mark-Viverito, who ran unopposed last week for a second term and was a Thompson supporter. "I think that’s a mandate for us to be more vocal on the issues that people want to be vocal on," she added.

Some members question (for the most part behind the scenes) whether Quinn is the right person to lead that team.

"I am going to be supportive of whoever is interested in really being that countermeasure," said Mark-Viverito.

Quinn argues she is. Saying she is "extraordinarily confident she will be re-elected speaker with little to no opposition," Quinn cites successfully standing up against the mayor's proposal to close firehouses earlier this year as an example of her independence. But as other Democratic members of the City Council say last week's margin of victory represents a call to arms against the administration, the speaker attributes the results to voter dissatisfaction with the economy.

When asked by Gotham Gazette if she would stand up to the administration more in a third term, Quinn said, "Fighting for the sake of fighting, that's not going to get anyone a job."

"When we can't agree, " she added, "we are going to hold firm to our principles just like we did in the first term."

If you take a look at the legislative record, the council and the mayor have only sporadically disagreed in the last four years. Under Quinn, the council overrode nine mayoral vetoes -- averaging about two a year. Her predecessor, who was also a candidate for mayor while speaker, jumped at the chance to oppose Bloomberg, leading the council in overriding the mayor at least 40 times.

There is no question, said Baruch College's School of Public Affairs Dean David Birdsell, that Quinn's tact has been more conciliatory than her predecessor's, Gifford Miller. Given Tuesday's results, that approach might pose a challenge for her now.

Birdsell said he would be "really surprised" if Quinn did not see a challenge to her leadership now.

On the other hand, some of Quinn's veteran colleagues argue the council will be stronger in a new term with Quinn holding the reins.

"Any leader is always feeling the pulse of the members," said Councilmember Robert Jackson, who said he supports a second stint as speaker for Quinn. "No one," he added, "wants a coup."

Some of the council's new members, however, are not ready to commit to another term with Quinn.

"You're definitely going to see a much more independent council and much more progressive council, fighting for the issues that have not been brought to the table before," said Dromm. Issues like requiring businesses to provide paid sick leave, he added.

"I have not made a 100 percent commitment to her," Dromm said of Quinn. But, "my response to a lot of that is who is the other candidate?"

Newly minted Councilmember-elect Ydanis Rodriguez of Washington Heights also declined to say whether he supported Quinn's candidacy for a second term as speaker.

Many of these new members, which include several activists and public school teachers, are expected to push the council more to the left and put forward an agenda that is likely to challenge the mayor more than the one seen under Quinn. Some of the council's new members are already committing to getting paid sick leave approved and are requiring more say at the Department of Education. For instance, Dromm, a public school teacher, said he wants to see less of a focus on testing at the Department of Education and more accountability to parents.

Adopting lines from the Thompson campaign, some incumbents, including Councilmember Leroy Comrie, the deputy majority leader, say the council is ready to take on more aggressive policies to curb the city's cost of living and bail out the middle class.

Stepping Up to the Plate

Despite the call for a more anti-Bloomberg council, most agree that Quinn will likely end up winning another term as speaker. Some say it's because members value her leadership style, while others say it's, in part, because no one with widespread support is willing to challenge her. Although Councilmember Charles Barron announced last week he would step up to the plate, it is unlikely (given his often divisive stance) he could garner a majority.

Among the names some have floated is Inez Dickens, a popular councilmember from Harlem. According to a staff member, Dickens is not running for speaker.

Some political observers say what's important to them is not who is in charge on the east side of City Hall, but what issues they bring up. For some of Thompson's most vigilant supporters, they are hoping the council adopts their candidate's platform, and some are happy to see Quinn be the one to do it.

"Is she willing to challenge the mayor to achieve it?" asked Arthur Cheliotes, president of the CWA Local 1180, of Quinn's candidacy for speaker. "I'll give her the benefit of the doubt, I think she can."