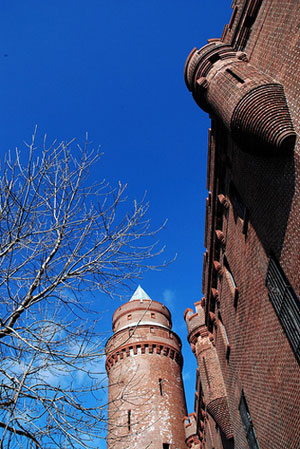 Shoving the debate over paying living wages into the spotlight, the City Council rejected a proposal from the Bloomberg administration and developer Related Companies yesterday that would have turned an empty, gargantuan armory in the Bronx into a shopping mall.

The move was a rare one by the 51-member body, which up until now has not rejected a major land use proposal put forward by the Bloomberg administration. The project, known as the Kingsbridge Armory, was estimated to cost about $300 million and would have provided a community in the northwestern section of the city's poorest borough with about 2,200 jobs.

The redevelopment project was rejected by a vote of 45 to 1, with Councilmember Helen Sears as the lone vote to move the project forward. Councilmember Melinda Katz, the chair of the council's land use committee, abstained due to a potential conflict of interest.

At the center of the rejection of the redevelopment, which had been years in the making, was a community proposal to force the project's potential business owners and its developer to pay "living wages." Community leaders defined a living wage as more than $10 an hour.

Opponents cited city, state and federal tax breaks for the developer -- $18 million from the city and state alone -- as one impetus for the living wages requirement, according to the Drum Major Institute. Some officials, including Bronx Borough President Ruben Diaz Jr., and community groups argued the public deserved well-paying jobs in exchange for taxpayer subsidies.

"We see how the interest of the people has prevailed over corporate America," said Diaz, the foremost public opponent of the project, following the council vote. "We here maintain that the notion that any job is better than no job no longer applies.

On the other hand, the developer argued the project would not be viable if it included a mandatory requirement for mall shops -- think Cinnabon -- to pay living wages.

In a statement, Joanna Rose, spokesperson for Related Companies said, "While we have always offered various additional community benefits, the conversation never moved beyond a singular agenda -- seeking to mandate wages on all future retail tenants, an issue that was always outside of the control of Related as a landlord."

She continued: "This was never about the money involved, but about outside groups imposing artificial wage demands that do not exist anywhere else in New York City or New York State that were then adopted by the Bronx borough president and Bronx council delegation without any independent critical analysis. These demands simply made the project unviable."

Other labor and business groups criticized the council yesterday for voting down the project, citing a floundering economy and a 10.3 percent unemployment rate. Mayor Michael Bloomberg, who was at the United Nations climate change conference in Copenhagen, said in a prepared statement that the council's vote signaled that the "Bronx was not open for business." Further, he said, regulating living wages is "not the role of the public sector."

"As a result of today’s vote, we can say one thing for sure: There will be no wages paid at all at the Kingsbridge Armory for the foreseeable future," Bloomberg said.

At City Hall yesterday, council leaders said other factors contributed to the Kingsbridge Armory rejection, including traffic and environmental issues. Councilmember Joel Rivera of the Bronx said a traffic study conducted by the Kingsbridge Armory Redevelopment Alliance, a community group opposed to the project, found the redevelopment would have brought an additional 1,500 cars to the area during peak hours. The area is already congested and plagued by high asthma rates, which can be attributed in part to high diesel fumes, Rivera said.

Officials at the council said they want to see development at the Kingsbridge Armory, which has stood vacant for more than 10 years. But, as a caveat, it has to be development that suits the community and its needs.

The mayor has five days to veto the council's vote on Kingsbridge, which the council could then override. Council Speaker Christine Quinn, who said the Related project was "simply not the right proposal" for the armory, confirmed that there were enough votes to override the mayor's veto, which could happen as early as next week.

Those that opposed the project, including Councilmember Annabel Palma, who heads the body's Bronx delegation, and Diaz, hope this project will set a precedent for other publicly subsidized proposals that go before the council. Palma and Bronx Councilmember Oliver Koppell have introduced legislation (Intro 1105) that would require businesses or corporations to pay a living wage if they receive public subsidies for economic development or community assistance.

Yesterday city and community officials said they hope the Kingsbridge vote would start a broader conversation on this type of requirement.

"When Mayor Bloomberg makes his way back from Copenhagen, he may think that this fight is over," said Stuart Appelbaum, the president of the Retail, Wholesale and Department Store Union. "Well, he's mistaken: As far as we're concerned the battle for middle-class jobs for New Yorkers has only just begun."

More than 140 cities nationwide have adopted a living wage ordinance.