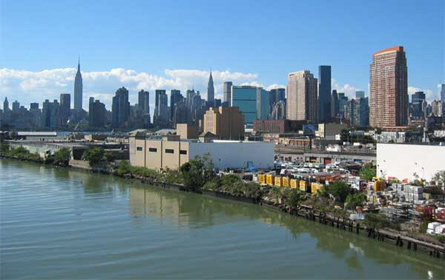 Queens West, like many of the large new developments in the city, will provide thousand of parking spaces when it is completed.

In its effort to achieve a "greener and greater New York" while accommodating one million new residents, Mayor Michael Bloomberg's PlaNYC2030 embraced transit-oriented development" -- the concentration of new housing in neighborhoods with good access to the city's subways and buses. The plan contends that such development will encourage these new New Yorkers to use mass transit rather than cars, helping to improve air quality and transportation efficiency.

In last year’s PlaNYC progress update, the mayor's office claimed "21 transit oriented rezonings" of neighborhoods such as the 125th St. Corridor in Harlem, Dutch Kills in Long Island City, St. George in Staten Island, and Coney Island as a major step towards sustainability.

The third anniversary of PlaNYC o Earth Day provides an opportunity to look beyond the rhetoric and examine the details of these supposedly sustainable rezonings. The unfortunate truth is that many of New York City’s "transit oriented" rezonings instead encourage automobile use by requiring off-street parking. They destroy the mixed-use, walk-to-work character of communities like Long Island City in favor of high-end residential redevelopment. At the same time, the city has missed huge opportunities to cluster new development around transit stations in outer borough neighborhoods like Bay Ridge and Corona, instead reducing development potential to preserve the car-oriented, suburban-like environment.

The term "transit oriented development" was introduced by Peter Calthorpe, a California planner and architect, in the late 1980s. Calthorpe defined it as a method to create dense, mixed-use, pedestrian-friendly, socio-economically diverse neighborhoods centered on transit stations. He believed that combining a rich local pedestrian environment with access to regional centers by transit would reduce dependence on the automobile and promote more environmentally friendly and sociable lifestyles.

With origins in the environmental, anti-suburban sprawl movement, transit oriented development was intended to be a more sustainable growth model for booming Sunbelt cities. Social equity was also a critical component, as this kind of development would provide a greater variety of housing types at a range of costs and allow access to jobs without the expense of owning and maintaining a car.

In the past decade, however, Calthorpe's term has increasingly been co-opted by the real estate industry to market any kind of moderately dense, urban infill development. If the concept of transit oriented development is diluted to simply mean density and proximity to transit without discouraging car use -- or encouraging socio-economic diversity -- then we miss Calthorpe's message entirely. And in New York City, where transit is just about everywhere, simply branding development "transit-oriented" can render the term meaningless.

Perhaps the greatest contradiction comes in the city's attitude toward parking. In striking contrast to the stated objective of PlaNYC2030 to reduce the number of cars on the road, the Department of City Planning continues to require most new developments to provide off-street parking - usually garages -- for residents.. In the past two years, studies by the Furman Center and Transportation Alternatives have called attention to the impact this has had on development patterns in the city.

While new development in Manhattan below 96th Street generally is exempt from stringent parking requirements, new projects in Harlem and in the outer boroughs must provide off-street parking in ratios ranging from 0.4 to 2 spaces per unit. Developers can apply to the Department of City Planning for waivers for small or irregular lots but not for large sites like those on the East River waterfront where much of the growth is taking place.

New York City neighborhoods built before the advent of the car, like Park Slope and the West Village, have an average of less than 0.1 off-street parking spaces per home. The increased number of spaces in rezoned neighborhoods like Long Island City, Harlem, and Greenpoint-Williamsburg -- close to the Manhattan core and touted by the city as transit-oriented -- will likely add tens of thousands of new cars to the city.

The convenience provided by abundant and free off-street parking is a major incentive for people to use cars rather than transit. Transportation Alternatives' study estimates that residents of new development are 40 percent to 50 percent more likely to own cars than typical New Yorkers.

As a case in point, the recent rezoning of Dutch Kills -- specifically cited as a sustainable transit-oriented rezoning in 2009's PlaNYC update -- incorporates minimum parking requirements of half to two thirds of a parking space per apartment. To the west of Dutch Kills on the Long Island City waterfront, the Queens West and Hunters Point South mega-developments, also lauded in PlaNYC, will add more than 6,000 new parking spaces when completed.

The city's parking requirements essentially exclude the possibility of developing traditional, walkable urban environments, the kind of neighborhoods that Calthorpe envisioned in his concept of transit oriented development.

With thousands of new cars and drivers entering the city thanks to all this new parking, the impact of these supposedly transit-oriented, sustainable rezonings will be just the opposite of PlaNYC's goals -- a larger carbon footprint, increased dependence on fossil fuels, lower air quality, and increased congestion.

In addition to supporting new automobile use, the city has done nothing to increase the capacity of the transit lines serving these neighborhoods, leading to serious overcrowding at stations like the Bedford Avenue L subway stop in Williamsburg. The Metropolitan Transportation Authority's current budget will actually cut service to PlaNYC's "transit-oriented" growth zones. The G train, a crucial link in the transit system for Brooklyn and Queens, will now terminate in Long Island City instead of running to Forest Hills, and numerous bus routes in the area are also facing major service cuts.

PlaNYC originally proposed to use the proceeds from congestion pricing to fund mass transit improvements, but when the charge to drive in Manhattan did not pass the state legislature, the Bloomberg administration had no back-up plan. There is a desperate need to expand transit service in Long Island City and North Brooklyn to accommodate the growing population. In order to avoid a dangerous increase in congestion and pollution, the city must aggressively engage with the MTA and state officials to establish a reliable funding stream for transit.

The city administration also has done little to encourage New Yorkers in neighborhoods farther from Manhattan in the outer boroughs to reduce car use in favor of transit. A study on the impact of Bloombergs rezonings released by the Furman Center last month finds that 59 percent of the lots that have been downzoned by the city are within a half a mile of a transit stop. Rather than encourage mixed-use, car-free density around transit stops in neighborhoods served by transit, like Bay Ridge, Dyker Heights, and Corona, the city has bowed to exclusionary local politics by downzoning (zoning for less density) and thus protecting the car-oriented suburban-like environment.

Social and economic diversity are critical aspects of true transit-oriented development. Ironically, though, the dense residential development that PlaNYC has encouraged in Long Island City and Greenpoint-Williamsburg through rezonings and "green" mega-developments like Hunters Point South threatens to undermine economic and social diversity in these mixed-use neighborhoods instead of encouraging it.

The Greenpoint-Williamsburg and more recent Dutch Kills rezonings removed longstanding protections for industrial businesses, allowing residential development as-of-right (without planning approval) throughout the neighborhood. Although the rezoning is technically "mixed-use" because light industry can legally remain, even a thriving industrial business cannot afford to pay the high rents that residential and retail can. Industry is being gradually pushed out to make way for condominiums paired with parking, high-end retail and restaurants -- a more profitable mix for developers but a less sustainable and equitable mix for New York.

As Adam Friedman, former director of the New York Industrial Retention Network has said, "If the city is serious about its commitments to reducing its carbon footprint â€¦ then the city needs local manufacturers to create green products. â€¦ If the city is to cut the income disparity â€¦ it needs to create well-paying manufacturing jobs and offer affordable space for industrial entrepreneurs."

True transit-oriented rezonings for Long Island City and Greenpoint-Williamsburg would have helped to keep housing and jobs in the neighborhoods by protecting the industrial and artisan businesses that in the mid-1990s were providing over 60,000 well-paying middle class jobs, according to the Department of City Planning’s 1993 Citywide Industry Survey.

PlaNYC's "transit oriented" rezonings also have failed to adequately protect affordable housing. The affordable units created by the city's inclusionary zoning program (commonly known as the "80-20" because developers receive a subsidy for allocating 20 percent of units to affordable housing) are outweighed by the loss of previously existing affordable units as market rents rise and rent-regulated tenants are pushed out by aggressive new landlords.

While transit oriented development is supposed to encourage socially and economically diverse neighborhoods, the evidence from PlaNYC's rezonings suggests that they are actually achieving the opposite -- displacing industry, local retail, and low and middle-income tenants from neighborhoods with good access to transit.

Suburbs in the City

PlaNYC 2030 has lead to numerous laudable sustainability initiatives in energy efficiency, bicycle infrastructure and bus rapid transit among other areas. But a survey of the city's zoning practices show that the "transit oriented rezonings," proposed in PlaNYC2030 and repeatedly portrayed as a major step toward sustainability, have not accomplished what they purported to do.

Instead of discouraging car use and promoting a diversity of housing and job opportunities as well as pedestrian and transit access, the city's rezonings are destroying existing mixed-use neighborhoods in favor of dense, high-end residential development paired with parking and retail. Further out in the boroughs, car-dependent suburban neighborhoods are being downzoned and preserved rather than retrofitted for sustainable transit-oriented urbanism.

The rezonings are increasing New Yorkers' reliance on the automobile and displacing good jobs and affordable housing from neighborhoods with access to transit, The mayor’s office and Department of City Planning should answer for that record.