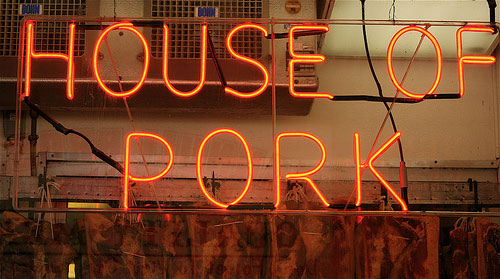 When it comes to bringing home the bacon, some City Council members do a lot better than others.

According to an analysis by Gotham Gazette, Councilmember and Finance Committee chair Domenic Recchia sponsored more individual member items than any other council member in this year's budget (more on its approval here). Recchia raked in nearly $1.3 million for nonprofits of his choice.

Recchia was one of four members -- Lewis Fidler, Leroy Comrie and James Oddo are the others -- who topped the million-dollar mark in member items, often referred to as council pork.

At the other end of the spectrum, Elizabeth Crowley garnered the least amount of money with $358,321, falling behind recently indicted Larry Seabrook, who had $362,276. Vincent Gentile, Gale Brewer, Margaret Chin and Helen Foster also got less than $400,000

These figures only include each councilmember's individual youth, aging and discretionary funding. All council members receive the same amount for youth programs and for senior programs. The difference comes in the so-called discretionary funding, which can go to a wide array of nonprofits.

The figures below do not include funding doled out by the speaker's office in consultation with the rest of the council (known as the speaker's pot or list). That pot was nearly $18 million this year, and its programs are often sponsored by one or more members.

When asked yesterday how discretionary money is doled out, Council Speaker Christine Quinn said more experienced members know how to navigate the discretionary funding system more than newer members. So, it's not surprising those that top the list are members of the council's leadership.

If a member wants to fund a program,"you got to ask," Quinn said.

Recchia said his position as finance chair means some member items that benefit the whole city have his name attached.

"A lot of these things are for the city of New York, not for my district," Recchia said. "These are all good programs."

The programs Recchia funded this year include $75,000 for the Brooklyn Arts Council and $15,000 for the Kings Highway Beautification Association to clean graffiti.

The numbers below are about 19 percent of the council's total discretionary funding, which is valued at about $165 million in fiscal year 2011. The vast majority of that, about $115 million, goes to citywide initiatives, such as combating domestic violence or adult literacy programs, among many others. This does not include another $231.6 million the council used to restore programs cut by the mayor.