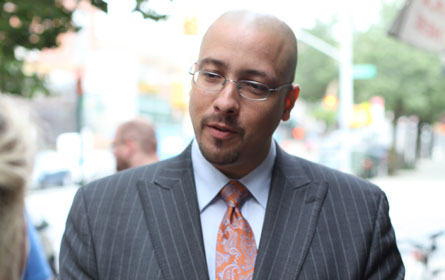 Photo by Jon Reznick
Gustavo Rivera hopes anger at State Sen Pedro Espada, along with his owns endorsements and connections can help propel him to victory in the September primary.

"My name is Gustavo Rivera. I am running for State Senate," the well-dressed man says as he pushes his flyer toward a sweat-drenched man wearing shorts and a white t-shirt hurrying across the intersection of West 231st Street and Broadway in the Bronx. The hurried man puts up his shoulder, blocking the literature.

"I'm running against Pedro Espada," Rivera continues. The man pauses, stops and turns in the middle of the street. "Oh, you've heard that name before?" Rivera asks. The man smiles and tells Rivera that he lives in Espada's neighborhood.

"So you live in Mamaroneck," Rivera retorts, again smiling as he brings up one of the many controversies that swirl around incumbent State Sen. Espada, the architect of the Senate coup that threw the state into months of chaos last year, the man currently under investigation by Attorney General Andrew Cuomo and the federal government.

This is how it goes as Rivera, his campaign manager, treasurer and five young volunteers catch the rush hour crowd to hand out literature as they pound down the subway steps in the deep summer heat. The only relief is the filthy water that splashes down from the tracks above. Rivera is excited; he has just received an e-mail on his Blackberry informing him that he has won another union endorsement. A few minutes later he learns that the Albany Project has rated him the top challenger to watch this election season.

Emerging from the Pack

In the past few weeks Rivera has become the favorite among the three men challenging Espada to represent the 33rd State Senate district. The one-time assumed front runner, Desiree Pilgrim-Hunter, dropped out of the race, citing a lack of money. That event was quickly followed by a New York Times article announcing that the Working Families Party was endorsing Rivera and will lend its considerable muscle to help him beat Espada. The race has gone from snoozer to the hot list.

Rivera, born in Puerto Rico has lived in the Bronx near the Kingsbridge Armory for 10 years. He is a former director of outreach for Sen. Kirsten Gillibrand and served as chief of staff to State Sen. Andrea Stewart Cousins. Rivera came to New York City in 1998 from Puerto Rico to pursue his doctorate degree in political science from the CUNY Graduate Center and has taught political science as an adjunct professor at Pace University. He headed field operations for the Obama campaign in 2008.

The New Roosevelt Initiative, a political action committee that plans to dump big bucks behind the candidate, and the Working Families Party both back Rivera. He also has endorsements from Communications Workers of America, AFL-CIO, Local 1180, the 504 Democratic Club, Educational Justice PAC and the Tenants PAC. There is no question that Rivera is well connected.

His fellow challengers, Daniel Padernacht -- a life-long Bronx resident, lawyer and member of Community Board 8 -- and Fernando Tirado -- the district manager for Community Board 7 -- are nowhere near as tied in, but some say they have more first hand knowledge of the problems that face the community thanks to their work on the boards. Tirado moved to the Bronx from Queens in 2006.

All three men answered a series of questions about the issues" for the Bronx News Network. The candidates generally agree on most issues. Espada declined to participate. His office did not return multiple calls seeking an interview or comment for this article.

Espada is by no means an easy target for Rivera. Besides having a sizable war chest, name recognition and incumbency to help him he also has his Soundview Health Clinic which many residents say have provided them with decent health care for years. During the senate coup while many mainstream papers tore Espada apart,local publications hailed Espada as a hero for Latinos. There is still the sentiment in the community that Espada is a Robin Hood figure being persecuted for sticking up for himself and the community he represents. Espada insists that he is being persecuted because of his race. 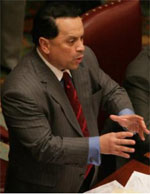 Despite his legal problems, incumbent State Sen. Pedro Espada has a sizable campaign war chest and is regarded as a hero by some in his community.

But a number of community members say the tide is changing. Cuomo's investigation and Espada's absence from the public eye as of late has a number of residents casting a more critical eye on the incumbent. Members of Espada's own party have tried to challenge his status as a Democrat.

Rivera hopes to take advantage of this.

Rivera's pitch is simple and direct. "What are you gonna do better than what he does?" asks a man who has already announced that he is "disgusted" with Espada."

"First of all, it's not going to be hard to do better than this guy," Rivera begins, tapping into the distrust of Espada that many people who stop him express. And then he moves into the catch line. "I am not magic. I am a human being. But I can promise to do what the incumbent does not. I will remember who put me here. I won't disappear into the other universe that is Albany. I will make sure that when I'm in Albany I will remember it is the people of the Bronx who put me there. And I want you to come and remind me who I work for."

In other words, Rivera says his door will be open to the people. Espada didn't open a district office for the first year he was in office and lately he has held town meetings by invitation only. Earlier this year he held a town hall meeting from the floor of the Senate chamber via the internet, taking questions by submission by phone and e-mail. Espada has said that he is very much a part of the community through his Soundview Health Clinic.

Unseating Espada is a crusade for many Democrats this year. They fear that having Espada on the Democratic ticket in November would be like a giant bull's eye on Democrats' backs, offering Republicans an opportunity to drag them over the coals for being corrupt. "If we don't beat Pedro Espada here, the Republicans will attack us with it throughout the entire state," said City Councilmember Oliver Koppell, who has endorsed Rivera.

Both parties, though have close ties to Espada. While Republican senators plotted with Espada and voted to make him the Senate president during the coup last year, rank and file Senate Democrats did nothing when their leadership wooed Espada back, making him majority leader — a title most Democrats will tell you is no more than that; it comes with absolutely no power.

Back on 238th street a woman named Holly stops to volunteer. She tells Rivera's staff she lives a few blocks up the street. "I read literature about the candidates and like that he supported Obama and Gillibrand," she says.

Rivera is definitely the hot shot at the moment. Today in the Bronx he is preparing to accept yet another endorsement, this one from the Benjamin Franklin Reform Democratic Club. He refuses to say the endorsement is a done deal, but his jubilation is a dead give-away.

As he makes his way up the hill from the subway stop to the Democratic club, Rivera jokes with one of his volunteers about his taste for PBR beer and promises to show him what a real beer tastes like after the meeting.

The meeting itself is a bit tense. Bill Samuels and his staffers hover around the crowded storefront as the members enter. The room is packed. Espada is a no-show. It is noted that he was invited by phone call and two certified letters.

Earlier in the year, Assemblyman Jeffrey Dinowitz" suggested the club put off endorsing a candidate so that challengers to Espada would have time to raise money and establish themselves. Now, the candidates are invited to speak on their own behalf. 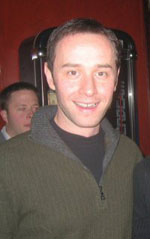 Community board member and lifelong Bronx resident Daniel Padernacht said some Democrats have tried to encourage him to drop out of the race.

Padernacht tells the crowd how he was recently encouraged by party members to drop out of the race. He mentions being warned that he will be a spoiler. He says he spent all night at the Board of Elections before the deadline for filing to get on the ballot, wavering about whether to run or not. He seems under siege, shaken. (The Daily News reported before the meeting that Diowitz organized a meeting with State Democratic leader Charlie King; Kevin Finnegan, political director at 1199 SEIU, and Public Advocate Bill DeBlasio to try to convince Padernacht to drop out of the race, saying he could split the vote like Ralph Nader.)

He notes that he has been endorsed by his mother.

Tirado gives a similarly wounded speech, noting that he was pressured to drop out by Democratic officials but plans to persevere.

They both say they feel like they know the community and are ready to run real grass roots campaigns.

The members of the club are then given a chance to speak. A few members voice their concern that Rivera has not lived in the community as long as Padernacht.

Koppell, who has already endorsed Rivera, tells the crowd, "If it wasn't for Nader, Gore would have won, and maybe we wouldn't have lost all those lives in Iraq."

The candidates take questions. Rivera is asked if any of his prominent former employers-- Gillibrand or Andrea Stewart Cousins — might endorse him. He notes they are both busy and that he already enjoys a slew of other major endorsements.

The vote is finally taken: Espada 0 votes, Tirado 0 votes, Padernacht 2 votes, and Rivera 43. Rivera thanks the crowd, telling them, "Now the real work begins." Samuels then strides up to the microphone to assure the members they made the right choice.

Padernacht leaves quickly, Tirado lingers outside. He has responded to multiple interview requests by insisting I e-mail him my questions. Tonight he insists again that he is very busy and that I should e-mail the questions. He looks disappointed, a bit lost.

While some Democrats credit Fernando Tirado with knowing about the district, he has struggled to gain support.

Off the record, some members of the Benjamin Franklin Club say that Tirado and Padernacht mean well; they just don't have the connections and political muscle Rivera enjoys.

Outside the club, in the dark, Samuels is asked how Rivera will be able to deliver for the district, which faces some of the highest unemployment in the city and such major issues as a lack of affordable housing. Rivera will be a freshman, after all, and Espada is now the majority leader.

"He will have the tools he needs once he gets there. He will be able to deliver for the district," Samuels says. I ask him to elaborate. "He has the power of persuasion. Look at Daniel Squadron; he is a freshman but he puts up bills and people pay attention. Not to slight Daniel, but Gustavo has more of this energy. He is a star, and people all over the state are watching this race. He has connections."

Rivera, however is not nearly as bold. "We can't relax for one second to beat this guy," Rivera says of Espada, "We can't count him out for one second. All I can promise if I win is that I will be accountable to the people who put me there."