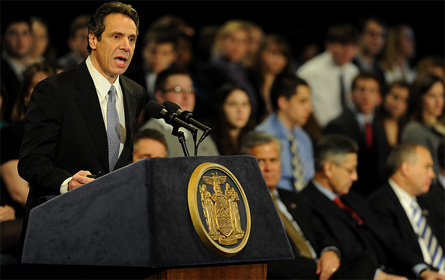 Gov. Andrew Cuomo delivered his State of the State address resembling the CEO of a floundering company as much as a proud new governor. Using three screens to deliver a PowerPoint presentation, Cuomo outlined his plan to help bring businesses back to the state, reduce taxes on individuals, revamp the juvenile justice system, reform campaign finance, fight political corruption and restore New Yorkers' trust in their government. The screens often displayed newspaper headlines announcing scandal and corruption in the legislature.

"What is the state of the state?" he asked the 200 politicians and 1,800 New Yorkers gathered at a convention center near the capitol building. "This is a time of crisis for our state, a time when we must transform our government to once again become the progressive capital of the nation and the seize the moment of opportunity," he said.

Just about anyone in the room would admit that Cuomo has a tough job ahead of him. Ask anyone off the record and they will tell you accomplishing his goals may very well be impossible, but daunting as the task may be, they want him to succeed.

Like a company chairman at a board meeting, before he delivered his speech Cuomo allowed the leaders of the State Senate and State Assembly majorities to address the crowd. They shared similar themes -- increasing jobs, reducing spending. Assembly Speaker Sheldon Silver, who is expected to be Cuomo's main opponent on trimming services and cutting spending, made it a point to say that some important programs -- notably rent stabilization, which expires this year -- must be saved.

Every year legislative leaders express support for governors and their declarations of the need for financial sacrifice and unpopular decisions -- only to stymie the governor at each turn. And the chaos that defined the senate last year has not exactly gone away; it's mostly just confined to the minority party.

Shortly before the speech, sour Democratic senators announced that they would not conference with the rest of the Democrats because they are disgusted with the way the party carried itself during its two years in the majority. The four are Jeffrey Klein, Diane Savino, David Valesky and David Carlucci. Their departure will likely further weaken the Senate Democrats, who mostly represent New York City, and yet may strengthen Cuomo's hand, because it is expected that those senators may lean more toward Cuomo's fiscally conservative policies than the Senate Democratic leadership.

While he still must fill in many details, Cuomo made it clear -- as he did in his inauguration speech Saturday -- that he would not be content with half measures. This was evident in his proposal for ethics reform.

Cuomo’s ethics reform plan went beyond anything proposed by his predecessors and even by some good government groups. Ethics reform, he said, would include ending pay to play, independent monitoring, full disclosure -- which Silver, for one, has resisted in the past -- and some public financing of campaigns.

"Maybe, just maybe, the stars have aligned,” said Blair Horner of the New York Public Interest Research Group. "This could be the year that reform finally comes to Albany. The governor's State of the State address not only offered a road map for the comprehensive overhaul of the structure of state government, but also added a sweeping prescription to cure the ethical ills plaguing Albany."

Cuomo also said that taxes are simply too high for all New Yorkers.

The Mayor on the Governor

A good portion of Cuomo's speech did not directly deal with the city. Consolidating local government, a property-tax cap and plans to stimulate financial growth upstate were main themes, but not relevant to the city. But at a press conference following the speech Mayor Michael Bloomberg was in a chipper mood. He said he felt very positive about Cuomo's speech. He saw a lot of himself in Cuomo, in that Cuomo is operating as a "CEO" and willing to put his reputation at stake to make changes the state needs.

"It's time to roll up our sleeves and help the governor as he makes the tough and necessary choices," said Bloomberg. Bloomberg liked Cuomo's centrist message, which downplayed partisanship and focused on fiscal responsibility.

Noting that other governors have laid out ambitious programs and failed, one reporter asked what Bloomberg saw that gave him hope that Cuomo will succeed. "The people are at his back," the mayor answered. "The time is right."

Bloomberg said, "Cuomo didn't come up and say we are going to kick the can down the road. He said this is the time, and he put his reputation on the line and said 'I'm going to do it,' and that's the kind of accountability you need. Everything the governor does won't work, everything he wants to do won't get done, but I would rather have someone do 12 of the next 10 things we need, rather than the next eight."

Others were far less enthusiastic. A number of anti-poverty groups responded after the speech, focusing on taxes for the rich. They want Cuomo to extend a millionaires tax to help close the state's $9 billion dollar budget gap and to insure that the poor continue to receive services in the depressed economy. Mark Dunlea of Hunger Action Network said, "The poor were missing from Cuomo's vision."

The aspects of the speech that will affect the city -- a team that will "redesign" how Medicaid is distributed, performance based financial rewards for schools, reforming the juvenile justice system and possibly closing some upstate prisons where many city residents are incarcerated -- were all very relevant and fresh on Bloomberg's mind.

Bloomberg, who was accompanied by new schools chancellor Cathleen Black, was exuberant about Cuomo's plan to set aside a portion of the state's education aid funds to award to schools that increase their performance. "I was just thrilled the governor said he thought aid should be given out by performance, and if the state did that, New York City would get a great percentage of state educational support," Bloomberg said. He said most schools in the city are improving on some level regardless of how they currently perform.

The question, Bloomberg said, is, “Where are they gonna get the amount of money we depend on to carry us forward?”

Cuomo was blunt in his assessment of programs for young people under the supervision of institutions other than the school system. He proposed a consolidation of the state's juvenile justice system, saying: "You have juvenile justice facilities today where we have young people who are incarcerated in these state programs who are receiving help, assistance, program treatment that has already been proven to be ineffective. Recidivism rate in the 90th percentile. The cost to the taxpayer is exorbitant. For one child over $200,000 per year. The reason we continue to keep these children in these programs that aren't serving them but are bilking the taxpayers is that we don't want to lose the state jobs that we would lose if we closed the facilities."

While Bloomberg supports closing underutilized facilities and prisons, he wants the state to give localities control of where they send youthful offenders so that New York City youth won't be shipped upstate.

Cuomo also proposed consolidating upstate prisons, which are increasingly underpopulated. To upstate legislators who steadfastly oppose closing prisons in their rural districts Cuomo said, "An incarceration program is not an employment program. ... You don’t put people in prison just to give people jobs."

On Medicaid, Cuomo said he learned during his time as attorney general how wasteful the health program for low-income people can be. In his speech, he announced the creation of a team to look at revamping the reimbursement process. "The Medicaid program needs a desperate overhaul," Cuomo said. "It is dysfunctional on many levels, so this process has to be done anyway."

The Medicaid Redesign Team will begin work on Jan. 7 and report to Cuomo on April 1.

Bloomberg said the city can't bear large cuts in Medicaid reimbursement. "We have to, by charter, treat anyone who shows up at our front door," said Bloomberg of the city's public hospitals. "If Medicaid would stop paying, that would be a burden we plain and simply can't afford."

Cuomo, with the use of his PowerPoint presentation, did inject moments of levity into the speech. He described the budget process as "ships passing at midnight." The image of three military ships floated by each other on the screen. "Wait," he said, and in a mock-startled tone informed the audience that he thought he saw someone he recognized. On one ship was Senate Majority Leader Dean Skelos, on the other Silver. And on the large destroyer was Cuomo. Suddenly out of the sky swooped "special interests: in a jet that dropped bombs on S.S. Cuomo. Cuomo pointed out that he was the only one targeted by the special interest bombs.

Cuomo has said he will wage a year-round campaign against labor unions and special interests to fight back against whatever negative press he receives for his proposed cuts. He did not drop some of the bigger bombs on the unions--like changes to the pension system during his speech.

In other words, the tough work still lies ahead.

Outside the convention center a large group of union members shouted and chanted. "How’s the new suit?" one state trooper patrolling the area asked another. "He's a pretty loose, nice guy the other answered, "But he's got a big job in front of him."