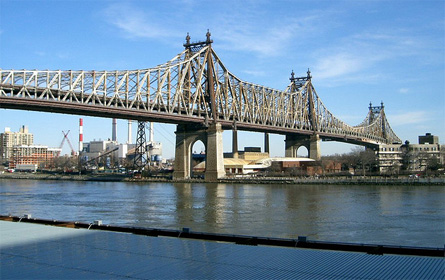 With some claiming it stripped the borough of its namesake and others citing the former mayor's lifelong record of service to the city, the City Council approved renaming the Queensboro Bridge the Ed Koch Queensboro Bridge on Wednesday.

The renaming was hotly debated on the council floor and throughout the city's largest borough. Just last week, a Quinnipiac poll found 70 percent of Queens residents opposed the renaming of the bridge, which spans from 59th Street in Manhattan to Long Island City.

The council approved the renaming by a vote of 38 to 12. Four members of the council's Queens delegation voted against it. Several other council members cited what they saw as Koch's mixed record on race relations during his tenure from 1978 to 1989 as the impetus for the opposition.

"I rise in defense of the Queensboro Bridge," said Councilmember Peter Vallone Jr., who led the opposition to the renaming. With petitions in hand, the councilmember said: "This is not about Ed Koch. It's all about pride, pride for our borough, pride for our bridge."

Detractors, including Vallone, argued the city would never attempt to rename the Brooklyn Bridge. Going after the Queensboro, they said, was borough discrimination. Vallone even suggested renaming the Queens municipal building after the former mayor instead.

The renaming was originally proposed by Mayor Michael Bloomberg in December. Yesterday, in a prepared statement, he praised the council's action.

“Ed Koch is responsible for so much of the progress we enjoy and the renaming is a perfect tribute to one of our city’s greatest mayors," Bloomberg said. "He literally saved this bridge and began the process of reinvesting in then crumbling bridges across the city."

Council Speaker Christine Quinn, one of the mayor's closest allies who was also born in Queens, immediately pledged her support when the renaming was proposed. Quinn, a presumptive candidate for mayor in 2013, has also received political support from Koch.

When describing her support for the renaming Wednesday, the speaker said Koch was the "bridge to a better day" after the city's fiscal crisis in the 1970s.

"Ed Koch was the bridge that brought New York City back from the brink of bankruptcy to financial solvency. And many New Yorkers feel very close to him for that reason," said Quinn. "The City Council is proud to pay tribute to Mayor Koch and his decades of public service with this timeless honor."

Koch, who was born in the Bronx, served in the City Council and Congress before his stint as the 105th mayor.

When he took the reins at City Hall, it was possibly the bleakest time for the Big Apple. The boroughs, which barely avoided bankruptcy a few years earlier, were plagued by crime, unrest and a flailing economy. To his credit, said council members yesterday, the city pulled out of it.

"I think Ed Koch has a claim at being one of the greatest mayors of this city," said Councilmember Jimmy Oddo of Staten Island.

At the same time, Koch's record in office was not without controversy. One of only four mayors to successfully win a third term, Koch's final years in office are often associated with the third term blues or voter fatigue. His administration was mired in scandal. Koch became embroiled in a dispute with then presidential candidate Jesse Jackson, leading some leaders at the time to question his racial sensitivity. After overwhelmingly snagging a third term with more than 75 percent of the vote, he lost a fourth term to former Mayor David Dinkins.

At the Emigrant Savings Bank yesterday, the council's temporary home, some minority council members cited this record as the reason why they voted against the renaming. Councilmember Al Vann of Brooklyn said no to the Ed Koch Queensboro Bridge, citing the former mayor's negative comments on racial quotas and redistricting in 1980.

"It was Ed Koch that divided this city," said Councilmember Charles Barron, a former Black Panther. "If you want to name something after Koch name Rikers Islandâ€¦ he was a nemesis to the black community."

Since his mayoralty, Koch has remained in the limelight. He appears regularly on NY1 and recently led a campaign in Albany to get legislators to pledge to independent redistricting reform. His office did not return a call for comment for this story.

The two level, cantilever bridge was constructed between 1903 and 1909. It was the third East River crossing to be completed. Council officials said the city would not pay to change the expanse's signage. It would all be done through donations.