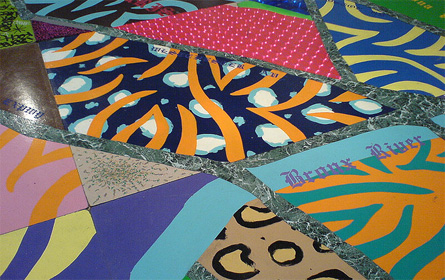 Photo by Barry Hoggard
Disco Pop Concrete Jungle Hip Hop by Matt Trumino, with references to the Bronx, was shown at the Longwood Art Gallery in 2006.

Artist and educator Hatuey Ramos Ferminmoved to the Bronx in 2007 to jump-start his career in New York after completing his studies in the Netherlands. An enticing mix of affordable housing and teaching opportunities lured Fermin to the South Bronx. Four years later, he has yet to leave.

Since Fermin's arrival, he has become a fixture in the local arts community working as a teaching artist at the Bronx Museum of Art, and most recently, launching Hubs Spokes Conversation, a podcast project that initiates discussions on issues such as art, communities, culture and urban spaces.

Building upon a long history of community involvement, the Bronx arts scene has grown significantly over the years offering more services, resources and opportunity for artists in spite of economic crisis, geographic obstacles and escalating rents in popular artist neighborhoods.

"There are not many of us, but we all really try to get to know each other and when someone is new, we all want to know who they are. It is a very tight community," explains Bronx-based artist, Melissa A. Calderon.

The scene has remained largely under the radar even as developers and media outlets have sought to generate buzz with pithy acronyms like "SoBro" and to rechristen Mott Haven the next Williamsburg or DUMBO. These efforts to create comparisons to other trendy artist hubs throughout the city overlook the unique features, challenges and traditions that have shaped the identity of the arts in the Bronx.

"The cultural movement has always been here, but has been fragmented and unfortunately a little overshadowed by all the other problems in the Bronx," says Juanita Lanzo, director of http://www.bronxarts.org/lag.asp Longwood Art Gallery.

Trying to pinpoint the exact location of the Bronx arts community is a challenge. The major cultural institutions are sprinkled throughout the borough from Bronx Art Space in Mott Haven and Longwood Art Gallery at the southern tip, and the Bronx Museum of the Arts in Concourse and the Lehman Center in Jerome Park farther north.

"The difficulty with the Bronx is the geography. Once you're in the Bronx, it is very difficulty to go from A to B. I think it is also the saving grace because development is a little bit slower," says Antonio Sergio Bessa, director of programs at the Bronx Museum of the Arts.

This geographic sprawl might limit the ease and accessibility to various cultural activity happening throughout the borough, but on the flip side, it has kept hungry developers from over-building and has provided a large cross section of Bronx residents with the opportunity to experience and engage in art exhibits, open studios and live performances.

An Art Community Plants its Seeds

Mott Haven's position between the Willis and Third Avenue bridges and only one subway stop from Manhattan, has made it a prime location for artists.

Over the last decade, Mott Haven has emerged as the nucleus of the art scene. The rezoning of the area -- formally known as Piano Town -- in 1997 and again in 2005, allowed developers to renovate old factories into loft space including C. Riegler’s Sons Factory and the Clock Tower.

From the beginning, artists in Mott Haven and around the South Bronx have spearheaded a number community-based initiatives including open studio tours, exhibitions and art collectives such as the Bronx Blue Bedroom Project, Rebel Diaz Arts Collective and the Mott Haven Art School. In 2004,Calderon, along with Mitsu Hadeishi, launched CONVERSIONs, a series of art events held in lofts and spaces throughout the area.

"It is sort of this badge of honor that everyone wears on their sleeve. You're in Mott Haven and it is a little harder to be here and as new people come in, they become part of that community immediately," explains Calderon. "Even when people leave for Queens or Brooklyn, they still come back. It is like this alum thing and it really is this way. They are honorary Mott Havenites forever even though they’re not there anymore, even me. I still stay in touch because I really love it down there and I try my best to help the community any time I can."

Calderon now lives in Norwood behind the botanic gardens near a group of fellow artists including Ray Felix, Vidal Centeno, Ben Stock, and Barbara Korman.

Many galleries struggle to survive in Mott Haven, but the Bronx Art Space has developed a large following both locally and around New York. A current exhibition on abstraction put on by the Bronx River Art Center in West Farms at the Bronx Art Space drew a crowd from all over the city. (It closes on April 29.) 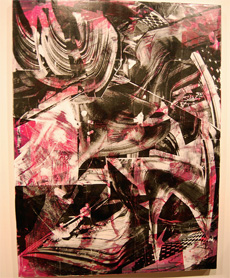 Photo by Andrew Russeth
Kris Chatterson's untitled 2011 painting is included o in a show on abstraction on display at the Bronx River Arts Center through April 29.

While a large group of artists have clustered in the Mott Haven area, many have been priced out by rising rents in recent years and have migrated to different parts of the borough including Longwood, Norwood and Concourse.

"A lot of [property owners] really see dollar signs when they see that there is this gentrification happening. I for one was priced out. I wanted to renew my lease and the landlord wanted to raise the rent $1,000. I had to go and that ends up being the story for a lot of people," explains Calderon.

Artists in the area also have an awareness of their own role in the cycle of gentrification.

"I am all for evolution and development and I think the arts community brings quite a lot to that. We always have to be mindful that when the process is too radical and begins to uproot a community that has been settled there for sometime, it is problematic," explains Bessa.

Many are eager to dub the Bronx art scene as "new" or "emerging" when it has a number of established art institutions and a rich cultural past producing artists like Fred Wilson, Vito Acconci, Margaret Bourke-White and DJ Kook Herc.

In recent years, though, the arts community has become more cohesive. Cultural institutions have expanded their programming to Bronx residents, while also providing better services and resources to artists.

Latinos and Hispanics represent 53 percent of the population in the Bronx, according to the 2010 U.S. census. As this community has grown in the borough, small art organizations and larger cultural institutions have launched new programs that focus on Latino art and traditions and provide resources to support local Latino artists.

At the impetus of director Eva Bornstein, the Lehman Center for the Performing Arts, has more than doubled its box office income in the past six years from $700,000 to $1.5 million. When Bornstein arrived at Lehman Center, she noticed that the programming catered more to the "Riverdale crowd." The lineup now includes a greater variety of performers from El Gran Combo and Johnny Mathis to Swan Lake. "We've expanded the programming to include the diverse audiences of the Bronx," says Bornstein. 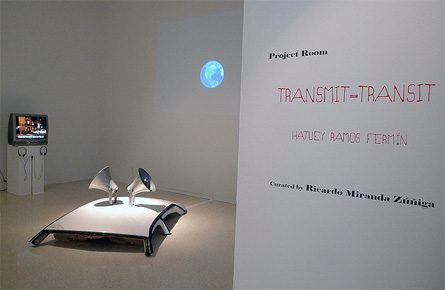 "Because of our roots in community activism, I think working closely with emerging artists is very close to our mission, so the museum has a lot of programs," explains Bessa. "We have a very tiny budget, but compared to other institutions, we actually commission much more work. We are very strong in providing educational programs to the community, especially teens."

On June 26, the museum will hold its first AIM Biennial showcasing the work of 72 artists from the AIM program both at the museum and Wave Hill. In addition, the museum has collaborated with the Randall’s Island Sports Foundation to commission site specific works by 10 emerging artists over the course of the summers of 2011 and 2012.

Many local artists also have utilized the resources of the Bronx Council on the Arts. The Longwood Arts Project (the contemporary art center for the Bronx Council on the Arts), serves as a critical space for emerging artists from the Bronx and greater New York. In 1991, the organization opened the Project Room to exhibit the work of Bronx-based artists. The city and state have played an important role in providing support for the Bronx arts community. Both Longwood Arts Project and Lehman Center for the Performing Arts receive funding through New York City Department of Cultural Affairs, National Endowment for the Arts and New York State Council on the Arts, Bronx Borough President Ruben Diaz Jr. and the Bronx delegation of the City Council of New York.

"The Bronx Council on the Arts is doing the best they can in helping, promoting and fostering artists in all disciplines here. There are also organizations and places like The Point CDC, Bronx Academy of Arts and Dance, Pregones Theater, the Bronx River Art Center, Bronx Art Space, Bruckner Bar, Lehman College Art Gallery, Longwood Arts Project, Bronx Museum of the Arts, just to mention a few that historically have helped foster the arts here,' wrote Fermin in an email. "Nevertheless, there could be more venues for showing or discussing your art, but with those limitations creativity comes into place and people start creating their own projects and venues."

Nicole Anderson is a freelance writer based in Brooklyn. Her website is here.