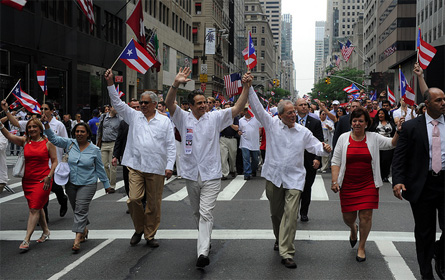 To a number of advocates and lawmakers, the end of legislative session this week not only represents a chance to see several important issues resolved but provides them with their first chance to gauge the trust, the investment they have put into Gov. Andrew Cuomo and to reflect on the leadership he has offered in return. With major deals in Albany still pending, some remain unclear exactly how they feel, but black and Latino lawmakers from New York City increasingly believe that Cuomo misled them -- or at least they didn't get what they were expecting. Although no one would go on the record to voice their concerns--behind the scenes their frustration is boiling over.

Today legislators are expected to vote on "the big ugly," the end-of-the-year deal that contains a property tax cap, a bill changing tuition rules for the city and state universities and a rent law deal that has been slammed by tenant advocates. And even now all the details are not clear.

With major cuts to education, health care spending and other social safety net programs across the state, as well as funding to New York City in the budget, minority legislators as a whole wanted Cuomo to make it up to them, to deliver on a promise that he is a Democratic leader who cares about issues important to downstaters, working class, the poor and black and Latinos. Most think he hasn’t done that.

Cuomo has had problems with the minority community, going back to his 2002 gubernatorial primary challenge to the state's first major black political candidate, Carl McCall. Cuomo dropped out of the primary, and McCall went on to lose to Gov. George Pataki. When he ran for governor eight years later, Cuomo was criticized for not picking a lieutenant governor of color or from the city. After his election, Latino politicians criticized him for not placing any Latinos in major cabinet positions.

Many of these legislators and some advocates then pinned hopes for having their faith in Cuomo restored on the last week of session. They even warned Cuomo that their support hinged on what he delivered on rent laws. It was a lot to wish for, perhaps, and almost impossible to achieve.

When Cuomo withdrew from the Secure Communities program, a move lauded by Latinos in the state, a number of city lawmakers said privately that they felt that the move was only the "tip of the iceberg," something Cuomo had to do to show that he was paying attention to their community. Rent laws would provide the real test, not only of Cuomo’s relationship with blacks and Latinos but also of how progressive he would be.

When McKee got wind of the agreement Cuomo had reached with the Assembly and Senate Republicans, it was clear he felt Cuomo had failed. He said Cuomo "sold us out," and that the bill was an "unmitigated disaster for tenants."

Sen. Adriano Espaillat visited the Assembly to glean details from members just after they had been briefed by their leadership. He told reporters quickly afterward that he wasn't sure what Cuomo had given up "to the other side," was worth what Democrats got in the rent deal.

What McKee and a number of Democratic legislators from the city wanted was a clearer effort to repeal vacancy decontrol so that apartments are not taken out of rent stabilization when they are vacated and the rent is $2,000 a month or above. One Senate staffer described the effort to do away with vacancy decontrol as "like Republicans pushing to ban abortion. It isn't going to happen, but we have to push for it."

Tenant advocates also hoped to change the process by which landlords can take apartments out of rent control by making improvements to the building—or by simply reporting that they have. The wanted the state to have to check to see whether reported improvements actually took place.

Lawmakers and advocates were ecstatic last week when they heard that Cuomo had threatened landlord groups that he would declare an emergency and kick rent control into the hands of the New York City Council. The move apparently led to some concessions but not the kind advocates were looking for.

Although the deal is still reportedly being tweaked in the backroom, no drastic changes are expected. And this is what we know so far:

The 421-a tax credit, which gives developers a tax break for setting aside 20 percent of a building for affordable housing, will continue for four years. Vacancy decontrol will still exist, but the bar will be set a little higher. The rent threshold for removing an apartment will go from $2,000 to $2,500, and maximum annual income will increase from $175,00 to $200,000. There is supposed to be a new measure to check on the work landlords claim to have done, but exactly how that will happen isn't yet clear. The rent laws will expire in four years and will be combined with the property tax cap in a bill that will expire in five years.

Republicans in the Senate were seen as getting more from this deal than downstate Democrats. As for Cuomo, who had said only that he wanted "stronger" rent laws and who made a tax cap one of his top three priorities, it seems that he came out of the deal fairly happy. He told reporters at a scrum yesterday, "You probably have to go back 30, 40 years to find a rent regulation bill that does as much for the tenants. You always try to do better, but the best bill in decades, I think, is pretty good."

Earlier in the day, the Black, Puerto Rican, Hispanic and Asian Legislative Caucus held an emergency meeting to discuss the rent deal. Then caucus chair Assemblymember Karim Camara and Assemblymember Hakeem Jeffries, both of Brooklyn, met with the governor. They exited the meeting with little to say.

Jeffries told reporters, the "deal as it is remains as it is," but said it may need "clarity and strengthening." Instead of criticizing Cuomo, he blamed Senate Republicans, whom he called a "wholly-owned subsidiary” of real estate interests.

Cuomo told reporters his rent deal increased the rent threshold for vacancy decontrol by 25 percent. "Maybe you flip it the other way and say, was there anything that would make you happy?" he said of disgruntled advocates and legislators.

As it stands, legislators don't seem willing to call Cuomo out publicly on the deal. Some are still waiting for all the final details, and others still seem a bit off guard.

"It's hard to have a complete assessment of the governor's performance with so much undone," said Sen. Kevin Parker. "He is taking his final now, he has a chance to significantly improve his grade."

Another senator from the city, Gustavo Rivera, still holds out hope that the rent deal will somehow be stronger than the details that have so far been made public.

"I believe that with the governor's support we can pass stronger rent laws that will protect my constituents and those in rent regulated units throughout the state. There has been speculation about what the final product will look like in terms of the rent regulation legislation -- but nothing concrete. Proposals that do not end vacancy decontrol simply do not do enough to end predatory practices by bad landlords in the Bronx and throughout the city," he said.

Others, such as Assemblymember Rory Lancman, believe Cuomo and Assembly Speaker Sheldon Silver did their best on the rent deal. "At the moment we have a Republican Senate that is eager to see rent regulation expire because then gold would rain down upon them from real estate industry. We’ve got to take what improvements we can get and live to fight another day," he told Liz Benjamin. "Hopefully, we can revisit this issue with a Democratic majority in the Senate in two years. If anyone thinks that [Silver], with full support of Democratic conference, hasn’t gotten the best deal that can be gotten, I think they’re being unrealistic."

Even if the city Democrats decided to directly challenge Cuomo, it is questionable how successful they would be.

Cuomo is hugely popular; people are writing articles touting him as the most successful governor in America, and his name is being bandied about as a 2016 presidential candidate. Most Assembly members and senators from the city view the Republican majority in the Senate as the main impediment to a better rent law and other legislation that they think would benefit their constituents. If they want to retake the majority, Cuomo may be the best tool they have.

The Senate Democratic leadership has told its members all year not to rock the boat, but to let Republicans be active in the hope the GOP will screw up and New Yorkers will vote them out in 2012. The Democratic leaders fear any repeats of their two years in the majority when they could not keep their majority together -- largely because of too many unpredictable legislators from the city. This year, they are trying to do better. In fact they had their ducks in a row on marriage equality -- knowing where all their members stood on the issue long before even the possibility of a vote became a reality.

Meanwhile , rumors run rampant among legislators and advocates that Cuomo made a weak on rent regulation to guarantee a vote on same-sex marriage, or that it’s all part of a Machiavellian scheme to help keep Senate Republicans in the majority. Regardless of rumor, the plain truth is that so far Cuomo's agenda has not meshed with that of the city legislators of color. Cuomo is a fiscal conservative, and his stance against the millionaires tax and for major budget cuts is not what many of their constituents want. But without more leverage it isn't clear how these legislators are going to get their way or get along with the governor for the rest of his term.

Late on Wednesday night, the senate moved to pass its fifth temporary rent extender. Espaillat and a number of Democrats voted against one of the extenders earlier this month as a sign that they wanted in on negotiations. Cuomo responded viciously saying that the legislators were shirking their duties--despite the fact that Cuomo and advocates had said there would be no great danger if the laws lapsed temporarily.

A frustrated and tired Espaillat rose to explain his vote last night saying hopefully that the senate's repeated failure to pass a more permanent measure indicated, "perhaps there is still room to negotiate," to win greater reforms. The extender passed unanimously.