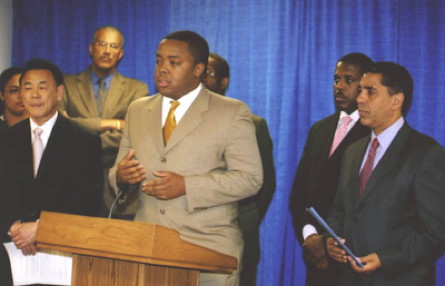 William F. Boyland, pictured here in 2005, from the assemblyman's website.

NEW YORK — William F. Boyland Jr., the four-term assemblyman representing the 55th district in Brooklyn, went on what for him might be described as a bill-drafting binge during the legislative session earlier this year  — introducing a total of three measures in Albany.

That exercise of his legislative duties contrasted with 2010 and 2011, when he introduced a total sum of zero bills.

But Boyland’s lack of productivity and the fact that he missed one-third of all votes last year — or that he was caught playing the video game Cityville on Facebook rather than preparing for Assembly sessions he failed to attend — are the least of the reasons why he is facing the greatest challenge to his control of the seat he virtually inherited from his father in this Thursday’s primary. After all, none of those foibles carry with them criminal charges.

Boyland was arrested on federal bribery charges in Brooklyn in November 2011, about three weeks after being acquitted in a separate Manhattan case. Prosecutors allege that Bolyand tried to solicit more than $250,000 in bribes, some of which was intended to pay for the attorneys in the Manhattan case.

Boyland pleaded not guilty to the charges outlined in the second bribery case.

The assemblyman did not return phone calls from the Gazette requesting comment about the allegations or the primary.

The Boyland family has been referred to as the “Kennedys of Brownsville,” and have been in power in the district since the  1970s, when Thomas Boyland, Assemblyman Boyland’s uncle, was first elected to the state Legislature in 1977. Boyland Jr. currently occupies the seat his father relinquished in 2003 after a 21-year career.

Even with the charges hanging over his head, one of the biggest hurdles Boyland’s six challengers face are each other, since they could ultimately split the vote, helping the well-known incumbent.

This year’s challengers include Tony Herbert, who works as a vocational education specialist at a shelter for homeless women who are mentally challenged; Roy “Uncle Roy” Antoine, the owner of a local clothing store; Anthony Jones, a former youth counselor and long-time resident who was close with the late Councilman James Davis; Nathan Bradley, who serves as both Community Board 5's chair and as a deputy chief of staff for state Sen. John Sampson; David Miller, a member of Community School Board 16; and Christopher Durosinmi, aide to state Sen. Martin Dilan.

Only Herbert could be reached for comment. “The Boyland name has come under serious fire and I don't think they're going to survive this,” Herbert said, referring to the bribery allegations brought against Boyland. (Citizens Union, the sister organization of Gotham Gazette, has endorsed Herbert.)

Herbert maintains he has far more legislative experience than the other candidates, including Bradley and Durosinmi, each of whom works for a different state senator. He notes that Boyland follows the  Democrat Party line, and while he said he "respect[s] the ideology of the Democrats," he says "the purpose of office is to serve the people," not to be a "party hack."

While generally critical of Boyland on the issues, Herbert says the lack of banking options in the district is particularly frustrating, given that the assemblyman serves on the housing, economic development, local government, banking and aging committees. Boyland is also the chair of the subcommittee on senior outreach and activities.

On his website, Boyland emphasizes his support of efforts to stem crime, including the DNA databank expansion that passed earlier this year.

“Ever since its inception, DNA evidence has revolutionized criminal investigations, helping solve thousands of cases that might have gone unsolved without it,” Boyland said in the statement. “By expanding our offender DNA databank, we will help our police officers and local officials solve more crimes and put dangerous criminals behind bars.”

The district, predominantly composed of much of Brownsville and Ocean Hill, as well as parts of Bushwick, Crown Heights, Bedford-Stuyvesant, and East New York, is among the densest in the state, due in no small part to the number of housing developments within its boundaries.

According to New York City CompStat reports, precincts in the district remain among the highest for crime in the city. Further, about half of all residents receive some form of assistance such as social security's supplemental security income, welfare or Medicaid, and the district is among the highest in foreclosure rates and lowest in high school graduation rates, according to official studies undertaken by the state.

There's a lot of work to be done in the district that's just not getting done, Herbert said, adding that the date of Boyland’s upcoming trial is “extremely problematic.” If Boyland is found guilty, it could undercut “the democratic process,” he said. Boyland’s trial is scheduled to begin three weeks after the primary.

Herbert said a guilty verdict in Boyland’s most recent case would deprive the voters of a chance to pick their appointed official because the Brooklyn County Democratic Committee would end up deciding who would fill the district seat.

It is also unclear where Boyland is getting the money to finance his campaign. Boyland's three fundraising committees have been sued over 40 times by the state for failure to file financial information relating to his campaigns, said John Conklin, a spokesman for the Board of Elections. All told, the suits tally approximately $23,000 in fines.

Conklin said the state can only go after the treasurer of a committee after it is closed. “We've done everything we can do under the power of the law,” he said.