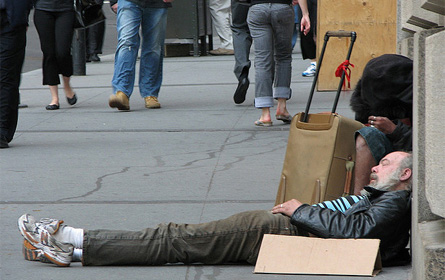 Homelessness is at a record-breaking high in New York City, and affordable housing remains scarce. In the case of one housing development project in Brooklyn, political and religious rivalries only add to the problem.

The Broadway Triangle project, which was approved by Mayor Michael Bloomberg in 2009, promised the development of 1,800 new housing units located in Brooklyn—44 percent of them for the poor.

But the ongoing lawsuit over the project raises questions over whom, exactly, the plan will benefit. The battle pits multiple organizations from the black and Hispanic communities against the mayor, and rival branches of the Hasidic Jewish community against each other, all of which are fighting for the same ultimate goal: more housing.

According to reports released by the Coalition for the Homeless in November, there are currently over 10,000 homeless families in New York City. And, “at the end of October there were 41,204 homeless adults and children sleeping in New York City municipal shelters, an all-time record.”

And a census bureau report stated that between 2005 and 2009, 18.6 percent of New York City residents were living in poverty, compared with 15.1 percent nationwide.

The report also stated that between 2009 and 2010, the poverty rate increased for non-Hispanic whites, for Blacks, and for Hispanics.

In spite of a general need for affordable housing, the lawsuit complicates the issue.

The Broadway Triangle Community Coalition (BTCC), a group of 40 Brooklyn-based organizations filed the suit two years ago, alleging that Mayor Michael Bloomberg and Raphael Cestero, commissioner of New York City Department of Housing Preservation and Development, discriminated against the Latino and African-American communities, and in favor of the Hasidim.

Political schisms and a federal investigation of one of the organizations involved in the project, the Ridgewood Bushwick Senior Citizens Council, have brought development to a halt, while thousands of low-income families still require affordable housing.

The BTCC sees this project as targeting a population unrepresentative of those in need. In a no-bid process, the city delegated the project to the United Jewish Organizations of Williamsburg, Inc. (UJO) a Hasidic community group directed by Rabbi David Niederman, and the Ridgewood Bushwick Senior Citizens Council, an organization founded by New York State Assemblyman Vito Lopez.

According to New York State Supreme Court records, the plaintiffs alleged, “Hasidim are significantly over-represented in the three Williamsburg developments in that white families, who constitute 10 percent of the Housing Authority’s applicant pool, constitute approximately half of the families.”

“UJO pushed for the rezoning of the Broadway Triangle â€exclusively for its own uses,’” the plaintiffs stated.

Specifically, they cited UJO’s plan to create six-or-seven story buildings with very large apartments as catering to the Hasidic community. Lower buildings are more convenient for the Hasidim, who do not use elevators on the Sabbath, and larger apartments would suit their typically larger families.

In the petition and complaint, the BTCC stated that “the City’s rezoning only for 6 or 7-story low density buildings is an intentional and unjustified limitation on the number of others, namely non-white families, who would otherwise be able to live there and who currently make up more than 90 percent of the borough-wide waiting list for affordable housing, particularly for 1 to 2 bedroom apartments.”

Gabriel Taussig of the NYC Law Department issued a public statement on Wednesday calling the plaintiffs’ claims “outlandish,” stating that they had “no merit.”

Of the 40 community groups in the BTCC, 38 represent Latino and African-American communities in Brooklyn, which have felt friction with the Hasidim over housing for decades.

However, the remaining two organizations, United Jewish Community Advocacy Relations and Enrichment (UJCARE) and Central Jewish Council are in fact, members of the Hasidim.

Why are these two Hasidic groups aligning themselves with a coalition fighting against the Hasidim? Gary Schlesinger, the CEO of UJCARE, blames the UJO. Schlesinger believes that not enough of the Hasidic population is being supported by current housing developments, many of which were also overseen by the UJO. “Schaeffer Landing had 150 units. Only 29 Jewish families moved in,” he said.

Whatever the logic, there is a reason.

The rivalry between the UJO and UJCARE is rooted in a feud over rabbinical legacy five years ago that ruptured the Williamsburg Hasidim.

When Grand Rebbe Moses Teitelbaum, the leader of the Satmar Hasidim for 27 years, died in April 2006, it was still unclear who would succeed him. Though traditionally a rebbe selects his successor in his lifetime, the case of the Teitelbaum brothers was more complicated.

Sam Beck, a Cornell University professor of human ecology in an unpublished draft of his recent essay, “Satmar Hasidim in Williamsburg” writes, “It did not take long for [Moses’s] sons, Aaron, the eldest, and Zalman, the younger, to start fighting over who was going to take over the reigns of the community and the Satmar rabbinical title.”

The repercussions of that feud are still felt today. In the BTCC’s petition and complaint, UJCARE describes itself as a “not for profit corporation dedicated to representing the interests of the Hasidic Jewish community, the majority of whom, among others, the UJO has abandoned because they support and/or are associated with the followers of the Satmar Rebbe Aaron Teitelbaum.”

But Niederman claims that the UJO serves all of the 70,000 members of the Williamsburg community, which represents over half of the Satmar Hasidim nationwide. “The UJO represents each and every one in the community,” Niederman said. “On a personal level, I belong to the Zalman synagogue. I continue to pray there but I work very closely with the institutions that belong to Rabbi Aaron.”

However, in December 2009, the UJO vigorously opposed the Rose Plaza, a housing development project proposed by a UJCARE affiliated developer.

In 2008, WNYC radio reported that UJCARE had received $200,000 in funding from the city council for the new fiscal year, a move that angered the UJO, which had received $210,000, a drop of 30 percent from the previous year.

The antagonism between these two community organizations has not only affected the housing development projects in Brooklyn, but also holds broader political implications.

Historically, the Hasidic population has represented a valuable cache of political influence, according to Hasia Diner, a professor of American Jewish history at New York University. She explained that because the Hasidic community was so firmly united, in the past they could ensure 100 percent of the vote.

Schlesinger is aware of this political clout but talks about how it has changed. He says that since the split, “The UJO can’t guarantee the entire vote anymore. Politicians know—you can’t fool them twice.”

That is the case of Broadway Triangle Community Coalition v. Bloomberg. Part of the Hasidim, which formerly showed strong support for Bloomberg, is now engaged in a legal battle against him.

On the other side are UJO and Vito Lopez, a powerful ally of the UJO, who is at the center of federal investigations revolving around accusations of fraud at the Ridgewood Bushwick Senior Citizens Council and related nonprofits.

Lopez’s Chief of Staff, Leah Hebert declined to comment on these allegations.

Pending these investigations, Justice Emily Goodman had suspended proceedings on the case over the Broadway Triangle development project.

Perhaps the most affected are those families who are in need of affordable housing but instead find themselves the incidental victims of politics.

Dana Donaldson, a 27-year old single mother of two with another baby on the way was the victim of domestic violence. She says she’s been living in shelters for the past 14 months.

She talked about the lengthy process of finding housing. The Department of Housing Preservation and Development, which assigns housing by a lottery-based system, can take years.

“Housing takes three years,” said Donaldson. “I wanted to be out of here at least before I had the baby. No one wants to have a newborn inside of a shelter.”

“If you don’t want to sit back and wait for housing, you need a job for your own place,” she said. Nelson does occasional work as a hair-stylist but says it’s nearly impossible to find work since she’s expecting her baby within the month.

“I go to people’s houses and do their hair even though I’m not supposed to be,” she said. “Anything I’ve got to do, I’ll do it for my kids but it’s hard.”

Gloria Nelson, 39, has been homeless since November 2009 and now resides in the Salvation Army Bushwick Corps shelter. She takes care of her husband, who suffers from diabetes, and her two small children.

She said it’s difficult for her to imagine a future for her children. “It gets to the point where you do whatever you have to do,” she said.

Juliet Morris of the New York City Department of Housing Preservation and Development estimates that over 90,000 applications for apartment housing lotteries are received per year. “It is clear that there is a critical need for affordable housing in New York, and it is a need that our mayor has prioritized during his administration,” she said.

Morris declined to comment on the Broadway Triangle project.

“Everything is politics but the only ones feeling it is the ones at the end of the totem pole,” Nelson said. “My biggest hope is getting a place for me and my family. I just need to get my kids out of that whole system.”