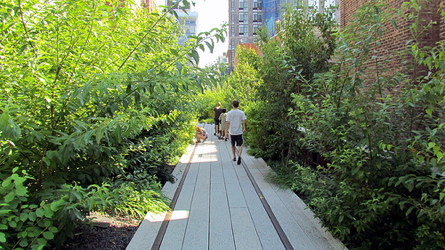 NEW YORK — The extraordinary greening of New York City over the past decade is part of  — and inspiration for — a nationwide urban parks revival that has been growing over the past two decades.

In a sign of the movement’s strength, some 870 people from 200 cities and 21 countries gathered earlier this month for the Greater & Greener urban parks conference, co-sponsored by the City Parks Alliance and the New York City Department of Parks and Recreation.

“Just about every city has one or more major park projects under way,” said Peter Harnik, director of the Center for City Park Excellence at The Trust for Public Land, which researches park best practices and benefits, and maintains a database on U.S. city park systems.

Driving this momentum is an evolution in the way parks are viewed: Once relegated to the sidelines, an amenity that could be dispensed with in tough times, parks are now seen as central to a city’s quality of life by public officials, civic leaders and citizens.

“It feels like parks have come into the public consciousness,” said Catherine Nagel, executive director of the City Parks Alliance, the conference co-sponsor.

One measure of this, she said, is the diverse roster of people who attended the conference, the fourth presented by the alliance.

Further evidence of the reach of the urban parks movement is a new commitment by the National Park Service to better connect inner-city residents with its urban national parks.

Interior Secretary Ken Salazar, in his keynote speech, used the occasion to announce the formalization of a partnership between the National Park Service and the city parks department to manage Jamaica Bay’s 10,000 acres of city and federal parkland.

The concept of a park is broadening, too.

“Parks are less isolated pockets of greenery and more a part of the urban infrastructure,” Nagel said.

Europeans have a much more expansive view of parks “as public spaces between buildings — the green glue that holds a city together,” said Helle SĂ¸holt, co-founding partner and managing director of Gehl Architects in Copenhagen.

But you don’t have to look further than Madison Square Park or Times Square, where pedestrian plazas have staked out turf formerly occupied by cars, to get a feel for that idea.

Here are four trends in urban parks from this year's conference:

Parks as part of our health care, educational and social services system

With a growing body of research showing that access to outdoor open space and recreation improves physical and mental health, many sessions focused on ways parks can be designed or managed to fight obesity, improve education, and partner with social service agencies.

“Parks are as fundamental to health and well-being as a clinic or hospital,” said Dr. Daphne Miller, of the Department of Family and Community Medicine at the University of California, San Francisco.

Mickey Fearn, National Park Service deputy director for communications and community assistance, said parks are spaces for spontaneous outdoor play, as well as programs that connect young people to the outdoors and nature.

He also said they provide experiences that help young people, especially those living in disadvantaged inner city neighborhoods, succeed and participate in a “powerful way in their communities."

As an example, he cited Rocking the Boat, the South Bronx youth organization that teaches teenagers to build boats and involves them in conservation efforts along the waterfront in “an area where they didn’t even know had water.”

Space for new parks is scarce in many cities and neighborhoods. New parks are being built in unlikely places: elevated rail lines, reclaimed brownfields and even long-covered rivers that are “daylighted” and restored.

Conference participants got a look at some of New York City’s solutions for shoehorning parks into a densely built cityscape, including the park-in-progress at Staten Island’s former Fresh Kills landfill, the largest park to be built in New York City in more than 100 years, and one of the scores of schoolyards that have been transformed into student-designed community public space.

This green infrastructure soaks up and slows down runoff before it overwhelms the sewer system, while also adding more green space in the city.

Sessions on sustainable park design for creating parks that serve as buffers for climate change and for preserving biodiversity underscored a new focus on parks as ecological systems.

Funding parks in an era of fiscal constraints

Even in a good economy, funding parks is a challenge. Finding innovative and equitable ways to pay for creating and maintaining parks was a major theme of the conference. Among the ideas explored were the establishment of conservancies and other forms of private funding, the role of developers in creating public space, partnerships with water and highway departments, and voter-approved dedicated funding.

Oklahoma City Mayor Mick Cornett spoke about his city’s investment of public funds for a multitude of civic and greening projects to breathe new life into a hollowed-out downtown, making it a place that attracts and keeps residents and businesses.

Since 1993, Oklahoma City voters have passed a series of penny sales-tax initiatives, the most recent to fund a new 70-acre central park, riverfront recreation, and biking trails, among other things.

In an interview in The Dirt, the blog of the American Society of Landscape Architects, he said: “We convinced people who live in the suburbs that the quality of life downtown is importantâ€¦.you can’t be a suburb of nothing.”

In his keynote speech, Mayor Bloomberg also stressed the economic growth that flows from investing in urban parks.

Speaking from a stage decorated to look like a pocket park — with the ubiquitous green portable cafĂ© tables and chairs, a bench flanked by greenery, and a bicycle — he noted the attraction of good city parks to everyone from a young person starting a career to a family raising children in the city to a business leader deciding where to locate.

“In a tough economy, we know it’s important to keep investing in what makes a city inviting to businesses and new residents,” he said. “The time to make the investment is tough times. The city walked away from its future during the 70s. We did not do that this time.”