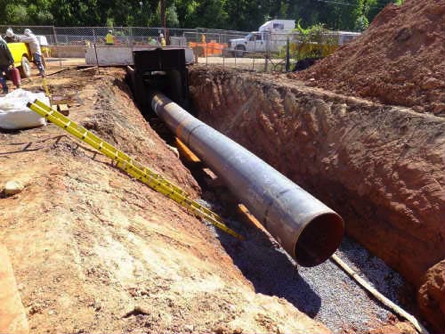 This story is co-published by MetroFocus and Gotham Gazette.

The 15.2 miles of new pipeline construction will end at the edge of Manhattan’s West Side, in the Meatpacking District, where it will connect to a new underground Consolidated Edison vault and be distributed through the utility’s system.

But the pipeline, known as the New Jersey-New York Expansion Project, has attracted a series of protests, legal challenges and concern along its proposed route.

Elected officials in Jersey City, including Mayor Jerramiah Healy, have opposed the pipeline on the basis that it would be built too closely to schools, parks and hospitals and could pose a public safety risk. Opponents of hydraulic fracturing, or fracking, fear that increased natural gas use could encourage even more drilling. They also worry that high levels of radon gas will be carried by the pipeline to consumers. A series of last-ditch lawsuits are aiming to stop the project.

Spectra Energy Corp., which is building the pipeline, emphasized that it has nothing to do with the process of extracting gas.

Marylee Hanley, a spokeswoman for Spectra, compared the company to Fed Ex and added, "We simply are the transportation system and are governed by the regulations of the FERC [Federal Energy Regulatory Commission]. We move the gas along our system. (We are) an open-access pipeline. As long as any party has gas to be moved, we are required to move gas on our system."

When it goes online next year, the pipeline is expected to carry 800 million cubic feet of natural gas per day to the metropolitan area. Construction of the pipeline began in earnest this summer after Spectra, won approval from federal regulators in May to extend its Texas Eastern Transmission and Algonquin Gas Transmission pipelines.

The city is betting on the pipeline to help increase its capacity to meet the growing demand for the somewhat cheaper, cleaner fossil fuel.

In an op-ed published last month in The Washington Post, Mayor Michael R. Bloomberg and George Mitchell, a pioneer of hydraulic fracturing, responded to criticism of fracking, saying shale gas production through the method represents “the most significant development in the U.S. energy sector in generations.”

They wrote that not only was it “good for consumers’ pocketbooks” because it lowered the cost of energy, it also “helped stimulate major infrastructure investments” like the New Jersey-New York interstate pipeline.

Consolidated Edison said the Spectra project will provide huge benefits to its customers. "This project will enhance the reliability of our gas system, and help us meet a growing demand for natural gas," said spokesman Michael S. Clendenin in an emailed statement. "This project will also help improve air quality in New York City by allowing more consumers to convert their boilers from oil to natural gas."

The city passed regulations requiring buildings to stop using heavy heating oils and to replace them with an alternative — natural gas, No. 2 heating oil, biodiesel or steam. Buildings were required to begin the process of converting to a cleaner fuel beginning in July.

The Spectra pipeline will deliver fuel for customers of both Consolidated Edison and National Grid, which service all five boroughs of New York City, as well as some parts of Westchester County. The pipeline will run through Linden, N.J., cut across the Arthur Kill strait into Staten Island, return to New Jersey,  weave through Bayonne and Jersey City, and make its way across the Hudson River to Manhattan. 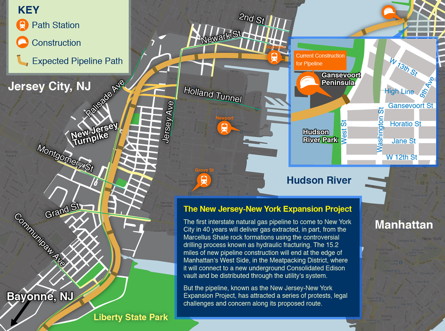 It will then run through the Gansevoort Peninsula on the West Side and under the Hudson River Park before it connects with the Con Ed vault near 10th Avenue and Gansevoort Street, not far from where the Whitney Museum is constructing its new building.

Besides distributing gas from shale sources in Pennsylvania, the fuel will come from the Gulf Coast, Canada and the Rocky Mountains, the company says. Experts believe that production could shift over time to 90 percent of natural gas coming from extracting the fuel in the Marcellus and Utica Shales of Pennsylvania and New York.

Democratic Assemblywoman Deborah Glick, who represents the 66th district in Manhattan, which includes where the pipeline will enter the island, said she had received complaints about the project from a number of residents.

“Individuals want you to find a way to stop something they don't believe is good for the community, and many see the pipeline as bad,” she said.

But she said the growth of the city demands that new energy sources be brought online. “New neighborhoods [are] coming to the city and the population is growing, even along the west side,” she said, adding energy has to come from somewhere.

“The country is awash in natural gas, and not all is related to fracking,” she continued, but acknowledged that “clearly the fear is that this will be an avenue for more” fracking.

“The question,” she said, comes down to whether natural gas is going to provide fewer emissions than coal and oil, for example. “But you're polluting either way,” she said, noting that none of these are in fact “clean sources,” despite such language being used by those promoting the energy.

In an environmental impact study on the proposed pipeline, the Federal Energy Regulatory Commission found that the risks from the pipeline were “minimal.”

“The applicants have demonstrated their project is needed by their willingness to bear the risk that the project’s costs can be recovered without subsidization from existing customers,” FERC said in the study. “The fact that the entire capacity of the proposed NJ-NY Project is subscribed under precedent agreements with 15- to 20-year terms is strong evidence that the market also believes that the project is needed.”

But environmentalists say federal studies have failed to fully account for the dangers of the pipeline, noting in particular the large quantities of carcinogenic radon in Marcellus Shale, which some scientists contend will not fully decompose before it reaches the city.

Spectra said that radon exposure had been reviewed by FERC in its environmental impact study, saying the agency "refers to several studies, including studies by the U.S. Environmental Protection Agency and U.S. Department of Energy, that have concluded radon in natural gas does not pose a health or safety risk to the public.”

But some environmental groups are adamantly opposed to any pipelines that could lead to fracking.

"We have been, and are, opposed to the development of any new infrastructure — such as the pipeline — that facilitate the increased burning of natural gas,” said Frank Eadie, a representative of the New York Chapter of the Sierra Club, which is also considering litigation to stop the project.

While the project gained FERC support after a bruising two-year public relations battle in New Jersey, it is only recently that residents in Manhattan have decided to take legal action against the construction of the pipeline.

The groups reached a compromise earlier this week over one of the main complaints — that the 24/7 construction at the Gansevoort Peninsula limited bike and pedestrian traffic at the Hudson River Park — after Spectra agreed to place a crossing guard to monitor the trucks entering and exiting the construction site, according to Jeff Zimmmerman, one of the attorneys who filed the original complaint.

He said they are still suing to halt construction, with a judge set to hear arguments in November.

In their lawsuit, along with environmental concerns, the organizations cited the risk of pipeline explosions, giving as an example the 2010 explosion in San Bruno, Calif., that killed eight people and caused millions in property damage.

Spectra says that, unlike the San Bruno pipeline, the New Jersey-New York Expansion Project will be stronger, thicker, buried deeper and will involve 100 percent x-ray inspection of welds.

"So, to compare our pipeline to that in the San Bruno incident is simply not correct," the company said in a presentation on the project it says was shown to Jersey City residents. "We have layers and layers of safety measures built into the design, construction and operation and maintenance."

In July, the U.S. Department of Transportation's Pipeline and Hazardous Materials Safety Administration fined Spectra over $134,000 for safety violations in their pipelines in Texas, Arkansas, Louisiana and the Gulf of Mexico.

Spectra spokeswoman Hanley said the fines stemmed from “corrosion” to the pipelines, but insisted such damage would not be “life-threatening,” though she refrained from elaborating why. She did note that Texas Eastern Transmission, the parent company of Spectra, “will be reviewing policies and procedures and reviewing all of the findings” by the PHMSA.

Of the seven violations in total, three of the findings resulted in the $134,000 in civil penalties. These had to do with maintenance and inspection failings, as well as above-ground monitoring of the area.

Spectra has long maintained the New Jersey-New York pipeline will be “among the safest in the nation,” pointing to changes in technology available to them, such as a 24-hour monitoring system. Those safeguards meet and often exceed the highest federal safety requirements, the company says.

All told, there have been 62 gas transmission explosions that have resulted in 34 deaths and almost $400 million in damage nationwide since 2000, according to the PHMSA.

The causes of the explosions ranged from external corrosion, damage from negligence, incorrect operation, equipment failure, and natural force, while the cause of a few pipeline explosions remain unknown. The images of the 150-foot flames from the San Bruno, California, explosion, are often highlighted by pipeline opponents when discussing safety.

Experts have also warned about the potential vulnerability of pipelines to terrorist attacks — one example being the foiled attempt to explode a jet fuel pipeline at John F. Kennedy International Airport in 2009.

The U.S. Department of Homeland Security also issued an alert in May about cyber attacks on the control systems of various gas pipelines nationwide. In a DHS newsletter, the agency notes reports of "targeted attempts and intrusions into multiple natural gas pipeline sector organizations.”